"I still don’t feel like I’ve fought to the best of my ability yet for
one reason or another, and that’s what I want to do. I want to go out
there and show the world what I can really do." - Michael Bisping 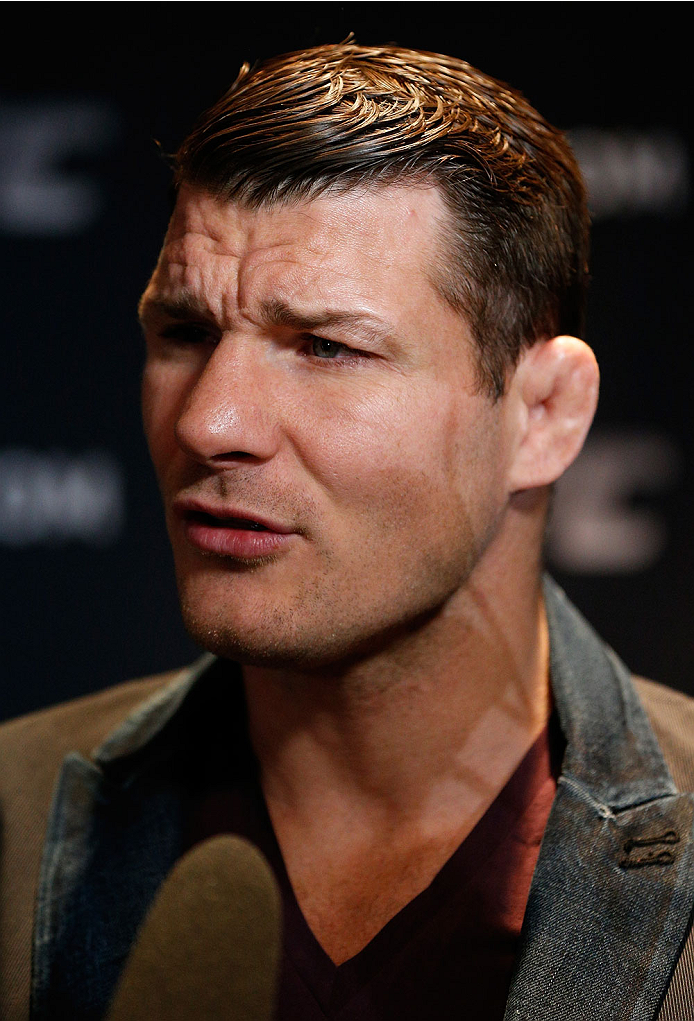 Like most of us that can be categorized as stubborn males, Michael Bisping believed that going to a doctor was only necessary if a limb was falling off. So when he began having problems with his right eye after his January 2013 fight with Vitor Belfort, the longtime middleweight contender brushed it off, despite the insistence of his girlfriend and other family members to get it checked out.

He even had another fight, defeating Alan Belcher by technical decision at UFC 159 in April of last year, despite admitting that he went into the bout “with not much vision.” But finally, he couldn’t put a visit to the doctor off any longer, and he got the bad news he had been dreading – a detached retina.

“I saw the doctor, he said detached retina, they fixed it, and then I was training for Mark Munoz (in October of 2013) and it re-detached,” said Bisping, who had a second surgery. He assumed that was it, that he would be able to continue competing at a high level much like boxing great Sugar Ray Leonard did after a similar operation. This time though, he was told that he may not fight again, news that understandably hit him like a ton of bricks.

“I was at a loss for words and it was hard for a while there,” he said. “For a good few months, there was no training and I couldn’t do anything because I couldn’t get my heart rate up, and not only the physical side of things, but there was a lot of soul searching. I’m thinking ‘I’m good at this sport, what am I gonna do next? How am I gonna pay the bills?’ I’ve done this for so long, this is all I know.”

Most fighters, whether they admit or not - and most don’t – know when the end of their career is near. They’ve lost a step, they get hit with shots they never got hit with before, and the chin isn’t as sturdy as it used to be. That doesn’t mean it’s easy to accept, but at least you have some warning signs. Bisping didn’t get that luxury. From winning six of his last eight fights against a steady stream of top-notch opposition to getting the news that he might be issued the fighting equivalent of a death sentence, Bisping was given the worst fate any fighter can receive – the shot he doesn’t see coming.

And as the days turned to weeks and months, Bisping followed orders and tried to retain some semblance of hope. Eventually, it came in the form of his doctor’s clearance, but the UFC wanted to make sure “The Count” was truly able to fight again at full strength. Again, Bisping was concerned that the answer he was going to get wasn’t going to be the one he wanted.

“I was worried because I passed, but with further testing, maybe I could fail again,” he said. “But I was in England, and I had to see an independent doctor that the UFC arranged, and again, he cleared me.”

Bisping was back in business.

“I pretty much floated out of that doctor’s office,” he said. “I really did. And a couple days later, a bout agreement came through for this fight. Happy is not the correct word; I was elated.”

“This fight” is tonight’s main event showdown with Tim Kennedy. It’s not an easy fight for someone coming off nearly a year on the sidelines, but Bisping isn’t complaining. He’s fighting again, and that’s all that matters.

“The best part of my adult life I’ve been involved with the UFC now,” said the Manchester, England product. “I wouldn’t say I ever took it for granted, because I didn’t. I always felt very fortunate to be in the position I was in. But to have it taken away, and almost taken away permanently, you really start to realize how good you had it. I’m just over the moon that I’m back.

“If I had to retire before, it would have been an unfinished career,” he continued. “I would have retired in a way I didn’t want to. This is giving me a second shot at it, and I want to make sure that I fully maximize that potential.”

At this point in a UFC career that began with him winning The Ultimate Fighter 3 in 2006, Bisping should be closing in on a long-awaited title shot. Simply put, while he’s lost some key fights over the years that could have propelled them into a middleweight championship fight, his body of work is such that a couple solid wins make him a deserving challenger. He doesn’t disagree.

“When I beat Kennedy, when I absolutely mop the floor with him, I know a lot of people won’t agree with this, but I think I’m the next logical matchup,” he said. “I’ve won seven out of my last ten fights in the middleweight division, I’ve always fought a Who’s Who, and I never turned a fight down. I’ve been a perennial contender, I bring a lot of excitement to the division, and I’ll certainly make it an interesting fight. So when you stack it up like that, it doesn’t sound nonsensical to have me as the next contender.”

It doesn’t, but first, it’s Kennedy, the latest in a line of 185-pound stalwarts who would like nothing better than to step into the Octagon with Bisping, and that aren’t shy about saying it in interviews or through social media outlets.

“I certainly don’t get offended by it,” he laughs. “More power to them. If they want to call me out, good for them. We’re fighters, I’m a fighter in their weight class, so I don’t fault them. Do I take it as a compliment? Yeah, I suppose so.”

What is it about the UK star that gets so many prospective opponents riled up though?

“There’s probably a bunch of reasons,” said Bisping. “Some people, maybe I’ve pissed them off and said some things. I don’t necessarily hold back a lot of the time on my opinions. Maybe it’s because they want to climb the ladder and they see me as the next logical matchup, who knows? I’ve been in the UFC for a long time, so people generally know who I am and it would be a higher profile matchup for them. But it doesn’t really bother me, to be honest. I applaud them and say thank you for keeping me relevant. I haven’t fought for almost a year, but these guys have kept me on the front page of all the websites by calling me out, so I thank them.”

He probably won’t admit to this, but maybe after almost losing his career to injury it’s a kinder, gentler Michael Bisping in Quebec this week. Nah, one look at the Brit and Kennedy at the pre-fight press conference on Monday put an end to that notion, showing that while he’s grateful to be back, he’s still hungry. And not necessarily for a title – though that would be nice – but for the opportunity to fight and finish his career the way he wants to. On his terms.

“That’s a difficult question to answer,” he said when asked what winning a world title would mean to him. “I could give one of the run of the mill answers that it would be the icing on the cake, and of course, every fighter wants that, to be world champion. And it was always a dream of mine to be world champion and be the first British UFC champion. It would be great and it would put me in the history books, so that would be awesome. But that’s really not what I got into this sport for. I didn’t get into this for my ego and to go down in the history books. I got into this sport to look after my family and to provide. I never went to school; when I left school at 14 I didn’t go to college or university or anything, and that was my fault. I always had a good head on my shoulders, but I wanted to go straight into the workplace and put some money in my back pocket because my parents never had any. I got into this to provide for my family, and I’ve achieved that and I want to continue doing that for a lot, lot longer and hopefully set myself up for a post-fight career and things like that. If I can get the title along the way, that’s awesome; of course that’s what I want and I’ve always strived for that and I’ll always be hungry to do that. Will I look at my career as a failed career if I don’t get that? No, I won’t. I’ve achieved a lot in this sport, I still have a lot to achieve and I want to be the champion, but I still don’t feel like I’ve fought to the best of my ability yet for one reason or another, and that’s what I want to do. I want to go out there and show the world what I can really do.”