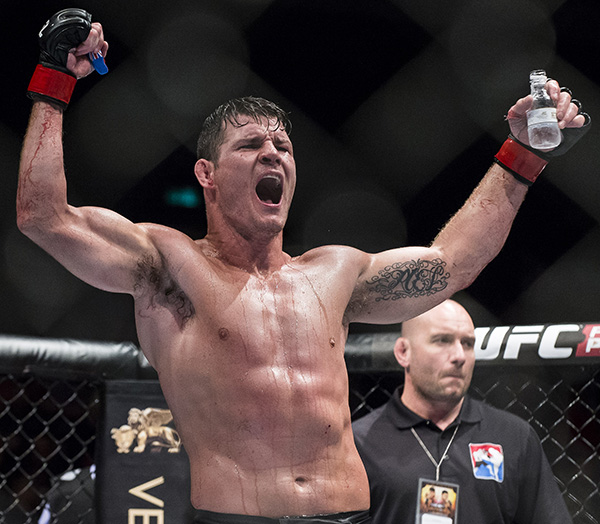 In the main event of UFC 217 on Nov. 4, Michael Bisping defends his UFC middleweight title for the second time against Canadian icon Georges St-Pierre in a superfight that will captivate New York City. But before “The Count” steps into the Octagon at Madison Square Garden, we revisit his 13 most memorable moments...

Mark Epstein I – July 10, 2004 – Cage Rage 7
Result – Bisping TKO2
https://www.ufc.tv/video/michael-bisping-vs-mark-epstein-cage-rage-7
Unbeaten, yet untested, a young Michael Bisping was just 2-0 as a pro when he got the call to take on then 6-3 Mark “The Beast” Epstein, and almost immediately, Bisping got a rude welcome to the next level as he was dropped to a knee by a punch and later sent to the canvas, where he spent the majority of the first round fighting from his back. And though Bisping was obviously still raw as far as technique was concerned, his resilience was already evident, and he came out strong in the second round, eventually stopping Epstein at the 1:27 mark. He would notch a KO win over Epstein in their rematch four months later, and the 24-year old from Manchester was on his way to the top.

Josh Haynes – June 24, 2006 – TUF 3 Finale
Result – Bisping TKO2
http://www.ufc.tv/video/michael-bisping-vs-josh-haynes-tuf-3-finale
With British fighters Mark Weir, Ian Freeman, Lee Murray and Leigh Remedios only having spotty success in the UFC, you wouldn’t have been criticized too much for suggesting that Bisping, along with Ross Pointon, weren’t going to make much noise on the third season of The Ultimate Fighter. And while Pointon made more fans for his personality than his fighting, Bisping quickly soared to the finals of TUF3, with his two round thrashing of Josh Haynes in the finale a mere formality. The UFC had a new Ultimate Fighter, and England finally had someone in the organization who looked like he would be staying around for a while.

Elvis Sinosic – April 21, 2007 – UFC 70
Result – Bisping TKO2
http://www.ufc.tv/video/michael-bisping-vs-elvis-sinosic-ufc-70
After getting his first post-TUF win over Eric Schafer at UFC 66, Bisping was the natural choice to lead the UFC back into the UK for UFC 70 in Manchester. It was the type of pressure cooker environment that could very well break a fighter, but Bisping took it all in stride, and from the moment he entered the M.E.N. Arena to Blur’s “Song 2”, he owned the hometown crowd. Sinosic took a little more convincing, but after scoring a knockdown and almost locking in a kimura, the Australian was stopped by Bisping in the second round, and a British star was born.

Matt Hamill – September 8, 2007 – UFC 75
Result – Bisping W3
http://www.ufc.tv/video/champion-vs-champion
Having done no wrong thus far in his UFC career, it was inevitable that somewhere along the line, Bisping would hit a bump in the road. That bump was his TUF3 housemate and rival Matt Hamill, a fighter Bisping figured he would have his way with given his superior striking. But it was Hamill who showed up with improved stand-up that night in London, and after three closely contested rounds, many thought the fighter ending up with a “1” on a previously unbeaten record would be Bisping. But it was Hamill on the short end of the split decision, sending fans into a frenzy on internet message boards for weeks. As for Bisping, he got the win, and wasn’t shy about letting people know about it. “Of course, don’t insult me like that,” Bisping said when asked at the post-fight press conference if he believed he deserved the decision. “I’ll give him the first round, I won the second, and I won the third.”

Rashad Evans – November 17, 2007 – UFC 78
Result – Evans W3
http://www.ufc.tv/video/rashad-evans-vs-michael-bisping-ufc-78
Two months after the Hamill bout, Bisping was back in action, and this time he was being asked to headline a Pay-Per-View event against fellow unbeaten Rashad Evans. This would be the true barometer of both fighters’ popularity, and after an entertaining war of words leading up to the bout, he and Evans delivered on all fronts, as the match garnered a considerable buzz by the time the opening bell rang. In the Octagon though, it would be Bisping falling short of victory for the first time, as Evans held off a late charge from the Brit to take a three-round split decision.

Charles McCarthy – April 19, 2008 – UFC 83
Result – Bisping TKO1
http://www.ufc.tv/video/michael-bisping-vs-charles-mccarthy-ufc-83
After the loss to Evans, Bisping decided that it was time to test the waters at middleweight, where he wouldn’t be forced into the role of ‘small guy’ every time he fought. Of course, TUF4’s Charles McCarthy took exception to being Bisping’s “break-in” fight at 185 pounds and he let Bisping know it at every opportunity. Such talk between the two made the fight perhaps the second most anticipated to Georges St-Pierre’s triumphant Montreal homecoming against Matt Serra, but Bisping wasn’t about to get into a prolonged war with “Chainsaw Charles.” Instead, Bisping stalked his foe, avoided a mid-round submission attempt and then proceeded to unleash a barrage of knees that broke McCarthy’s arm and forced a halt to the fight at the end of the first round. Middleweight? No problem.

Dan Henderson I – July 11, 2009 – UFC 100
Result – Henderson KO2
http://www.ufc.tv/video/dan-henderson-vs-michael-bisping-ufc-100
Following wins over McCarthy, Jason Day and Chris Leben at 185 pounds, Bisping locked horns with MMA superstar Dan Henderson as a coach on season nine of The Ultimate Fighter and led two members of his team, Ross Pearson and James Wilks, to victory on the show. Bisping wasn’t going to be so fortunate against “Hendo” when they met in the Octagon at UFC 100, and in a night when nothing went right, “The Count” was knocked out in spectacular fashion by the former two division PRIDE champion. It was a devastating defeat for Bisping, one that would take some time to recover from.

Denis Kang – November 14, 2009 – UFC 105
Result – Bisping TKO2
http://www.ufc.tv/video/michael-bisping-vs-denis-kang-ufc-105
When Bisping returned to action after the KO loss to Henderson, the entire MMA world was watching to see if the Brit was going to be able to recover – not just physically, but mentally – from the defeat. And he didn’t get any gimme in his return, as he was pitted against another international star in Denis Kang, a fighter who wasted no time in testing Bisping’s chin in the first round. Yet after some shaky early moments, Bisping – his back pinned to the wall careerwise – roared out of his corner for the second round and halted Kang at the 4:24 mark. “The Count” was back, proving that fighters aren’t defined by how they get knocked down, but how they get back up.

Jorge Rivera – February 27, 2011 - UFC 127
Result – Bisping TKO2
http://www.ufc.tv/video/michael-bisping-vs-jorge-rivera-ufc-127
The lead-up to this bout between the veteran middleweights was beyond heated, yet on fight night, it was Bisping who got his revenge on “El Conquistador,” as he stopped Jorge Rivera in the second round. It wasn’t a win that was going to move “The Count” closer to a title shot, but it was a solid victory, one that he followed up with another dominant performance, a third-round TKO win over his TUF 14 coaching rival Jason “Mayhem” Miller. 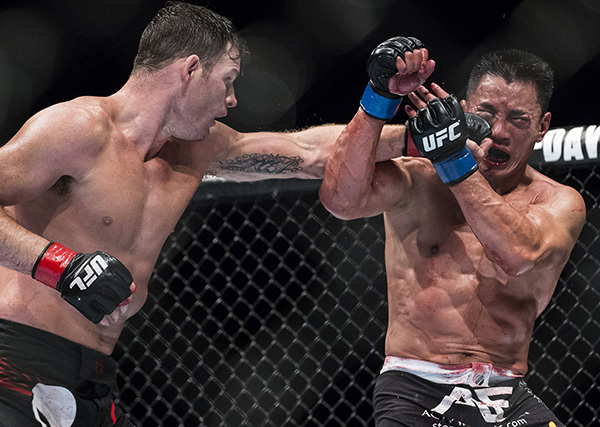 Cung Le – August 23, 2014 – UFC Fight Night
Result – Bisping TKO4
http://www.ufc.tv/video/michael-bisping-vs-cung-le-ufc-fight-night
From 2012 to April of 2014, Bisping only managed a 2-3 record, defeating Brian Stann and Alan Belcher while losing to Chael Sonnen, Vitor Belfort and Tim Kennedy. It was a rough spell for the Brit, who also had to undergo a pair of eye surgeries for a detached retina. But Bisping was not to be denied his place among the elite, and a punishing fourth-round TKO of striking specialist Cung Le was just what “The Count” needed to show that he was far from done as a top middleweight contender and 185-pound title threat.

Anderson Silva – February 27, 2016 - UFC Fight Night
Result – Bisping W5
https://www.ufc.tv/video/michael-bisping-vs-anderson-silva-ufc-fight-night
A loss to Luke Rockhold slowed Bisping’s momentum after the Le bout, but victories over CB Dollaway and Thales Leites put him in position to do what he hadn’t yet done in the Octagon – beat a legend. And that’s just what he did against the longtime middleweight king, showing off his grit and underrated skills once more en route to a unanimous decision victory. It was a win to be savored, but an unexpected opportunity would soon surface in the midst of his celebration.

Luke Rockhold II – June 4, 2016 – UFC 199
Result – Bisping KO1
https://www.ufc.tv/video/michael-bisping-vs-luke-rockhold-ufc-199
When Chris Weidman was forced out of his UFC 199 rematch with Luke Rockhold due to injury, it was Bisping who got the call with less than a month to go before fight night. Given Rockhold’s win the first time the two met, no one expected Bisping to turn the tables, but he did, knocking out Rockhold in the first round to win the UFC middleweight title. “The Count” was now a world champion.

Dan Henderson II – October 8, 2016 – UFC 204
Result – Bisping W5
https://www.ufc.tv/video/bisping-vs-henderson-2
What better scenario was there for Bisping’s first title defense than a hometown bout in Manchester against the man who handed him his most crushing defeat? And while Dan Henderson landed his “H-Bomb” of a right hand and gave the champion plenty of trouble over the course of their 25-minute rematch, it was Bisping who emerged victorious with a close, but unanimous decision victory. Now it’s off to MSG in NYC for a bout with GSP.