Michael Bisping: This Time it's Personal

"A lot of fighters try not to get too emotional – I try to get emotional because I fight so much better." - Michael Bisping 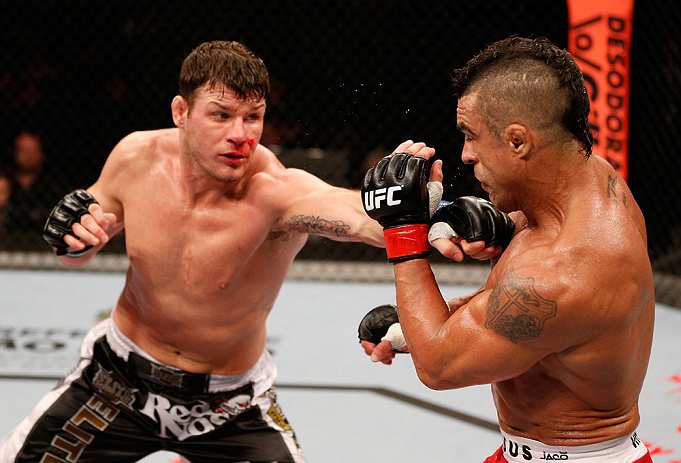 Heading into his fight with Vitor Belfort at the start of the year, tenured UFC middleweight contender Michael Bisping laid out his intentions should the fight not go his way.

“God forbid, if I fail, I’ll dust myself off, and I will climb up that mountain one more time, and I will keep going until I do it. I’m destined to be world champion, and I will be one day.”

Four months later, the former Ultimate Fighter winner is dusting himself off to start climbing that mountain one more time.

“The fight with Vitor didn’t go as planned,” Bisping says, reflecting on his January 19th encounter with “The Phenom” in Sao Paulo, Brazil following an afternoon training session. “He caught me with a head kick in the first round, but I recovered. I was completely fine when the round ended; I had my wits about me.

“I was happy with the first round. Second round was going well, and he caught me with a head kick. What can I say? Congrats to the guy. I was preparing for a lot of boxing, and I neglected training for kicks, and that was my downfall, really. You should be prepared for everything. That’s the beauty of mixed martial arts. I focused on the danger of his boxing too much, and that was my mistake.

“In my opinion, the fight was stopped too early,” he adds, “but I wasn’t going to make any noise about it on the night because you just sound like a sore loser; you know what I mean? The referee had called the fight, Vitor did what he had to do, so congrats to him.”

While some fighters would take anywhere from a few days to a couple of weeks to lick their wounds and enjoy being through with another rigorous training camp – not to mention some of their favorite culinary indulgences – the 34-year-old Brit was on the phone starting in on the process of planning out his return to the cage before the sun came up on Sunday morning.

“Immediately after the fight when I was in my hotel room, I texted Dana, and I said, `Listen – I’m completely fine.’ I had my wits about me; I didn’t need to go to the hospital or anything like that. I wasn’t knocked out; I was covering up, and the referee felt the need to stop it, you know?

“I texted Dana after the fight and said, `Look, I’m completely fine, and I’d like to get back in there ASAP.’ I was very lucky – within a week, Dana and Joe Silva got back to us, and said, `Alan Belcher, co-main event in New Jersey.’ I was over the moon.”

Anyone who follows the sport with more than a passing interest could have seen this one coming as soon as Belfort’s hand was raised in Brazil, as Bisping and Belcher have been taking shots at each other in the media for quite some time.

Following Belcher’s loss to Yushin Okami at UFC 155, the talkative British transplant made sure to take the opportunity to rub salt in the still-fresh wounds of the Mississippi native.

“Forgive me if I gloat a little bit when he comes up short, and looks basically like an embarrassment to himself,” he said prior to his bout with Belfort in regards to needling Belcher in the media. A few days later, Bisping too would end up on the losing side of the ledger, and the chance to have the two men settle things in the cage presented itself.

“I don’t want to go from fighting the top guys, and then just because I get beat, I don’t want to go down the ladder,” says Bisping of his decision to jump right back into the deep end of the division this weekend in New Jersey. “I want to keep fighting the best guys. I believe I’m good enough to compete, and I suppose there’s only one way to find out.

“I lost my last fight – it didn’t go the way I planned – but I certainly still feel as if I’m one of the best, and I want to show the world that by getting a win over another top 10 opponent really quick, and then I can put that loss to Vitor behind me as old news.

“Alan Belcher, he’s certainly a tough opponent; he’s in everybody’s top 10. Up until the point where he got beat by Yushin Okami recently, he was making some noise over a title shot and things like that, and I certainly don’t want a step down in caliber of opponent.

It certainly doesn’t hurt that Belcher has had a few choice things to say about Bisping and his abilities in the cage either.

“This guy has been calling me out for a long, long time, and now he’s kind of upping the ante in terms of smack talk and just flat out being disrespectful to be honest, and he’s making a big mistake.

“He’s called my fighting ability into question, and that’s all well and good because we’re going to fight. I take that very seriously; I’ve dedicated myself to being a mixed martial artist, and as far as somebody making comments about my ability, I take that personally.”

Bisping is no stranger to pre-fight verbal jousting.

He spent the better part of two seasons as a coach on The Ultimate Fighter exchanging barbs with Dan Henderson, and then Jason “Mayhem” Miller, and had a memorable war of words (and videos) with veteran Jorge Rivera in the build-up to their meeting at UFC 127 in Sydney, Australia.

The animosity was evident every time the two shared the stage, as they had words and nearly came to blows at both the pre-fight press conference and weigh-ins. Bisping emerged victorious in the heated battle inside the Octagon, a bout in which he struck Rivera with a controversial knee to the head when he was clearly down midway through the opening round.

“His latest video, he’s taking a page out of Jorge Rivera’s book,” Bisping says in regards to a video blog Belcher put out at the end of March. “When Jorge Rivera made some videos a few years ago, it touched a few nerves with me, it pissed me off, and it didn’t end too well for Jorge Rivera, and unfortunately, Alan is doing the same thing now.

If Belcher’s intention was to get under Bisping’s skin with these videos, then mission accomplished. Bisping speaks quickly and passionately when he’s discussing everyday life, but his “words per second” count doubles and the tone of his voice changes the instant the topic shifts to his opponent’s pre-fight video offerings.

While many fighters look to tune out trash talk and keep their emotions in check during training camp and in the preamble to their fights, Bisping embraces it, and uses that energy to fuel his performance both in the gym and on fight night.

“I love it when guys do this, when guys get me mad; that’s when I have my best performances. Once emotion gets involved, I’m a much harder man to deal with. On top of that, I’ve been around the UFC a long, long time, and I’ve fought a lot of fights, so if somebody comes out and makes it personal with me, that helps motivate me further, and wakes me up.

“Believe you me, when I’m like that, I fight the best,” he adds. “A lot of fighters try not to get too emotional – I try to get emotional because I fight so much better. That’s why all these people that take these little shots at me, that’s why they’re making a massive mistake. I love it when they do that. I saw that video and I was fuming; I wanted to rip his head off there and then.

In listening to Bisping, it’s clear he’s fired up, and while a portion of it clearly stems from the things Belcher has said about him over the years and in the preamble to this fight, it also seems like there is more to it than that.

This isn’t just frustration over his opponent questioning his chin or laughing at a slow-motion replay of his loss to Henderson at UFC 100 in a far-from-viral video.

“I’m pissed off with how long I’ve been in the UFC without getting a title shot,” blurts out Bisping. Though he has made reference to his seniority in the division in the past, it’s pretty clear he’s frustrated with his own inability to secure the role of “title challenger” so far in his UFC career this time.

“April 27th I’m not taking a backwards step, that’s for sure,” he continues. “I’m going in there guns blazing. It sounds corny, but I’m going back to the old me. When I first got involved in this sport, most of my first victories were all stoppages inside the first round, and that’s what I’m going back to. I was fueled by raw aggression back then and now I’m a lot more skillful, but I think maybe sometimes the game plans and the tactics have taken over the fighting side of it.

“So I’m going into this one as a fighter – guns blazing, letting it all hang out. I want to stop this guy. I want to finish him. A decision win isn’t good enough. I want redemption. I want to make a statement, and I’m going to do just that. I’m taking this very, very seriously. I’m pissed off, and believe you me – that’s going to make all the difference.”