Michael Bisping: Still a Man on a Mission 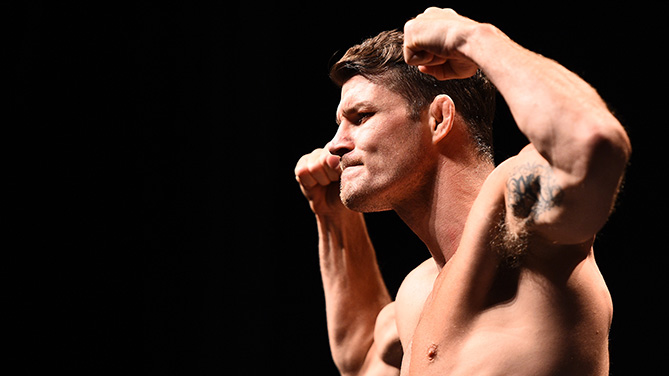 If you’ve never walked beside Michael Bisping when he steps into the view of a packed arena, you would never understand what that’s like for an athlete. It’s something almost indescribable and also something that can never be replaced.

“It is an incredible feeling,” he said. “There will never be any replacing that. I’ve been very lucky. I’ve been on both ends of the spectrum at times, but I’ve had tremendous support throughout my career and it’s incredible. To walk out into an arena and for them to erupt into applause and screams, it’s nuts. I never thought I’d experience that, and it’s the biggest high. It really sets your adrenalin on fire and it really blows my mind. Hopefully there will be more of the same in Glasgow.”

Saturday at The SSE Hydro, the UFC’s first event in Scotland will feature “The Count” against Brazilian contender Thales Leites. It’s Bisping’s first bout in the United Kingdom since 2010, and his ninth main event under the UFC banner. That’s superstar territory, yet he retains the hunger he had when he sat in the dressing room of the Hard Rock Hotel and Casino in Las Vegas in June of 2006. That night he said that winning the third season of The Ultimate Fighter meant that he wouldn’t have to go back to one of the numerous jobs he had to juggle to get to the pinnacle of the sport. Less than a decade later, a lot of his peers who have accomplished a lot less than he has have started to fade, started to take days off from training and have started losing the desire to fight, beat, and be the best. Not Bisping though.

“They do lose that hunger and you see it in the gym and in their general attitude,” he said. “For me personally, there’s several reasons that hasn’t happened with me. One reason is that I’ve had every s**tty job under the sun, and I never, ever want to go back to that again. (Laughs) I still feel I have to pinch myself every day to be in the position that I am. Yeah, I’ve worked my ass off and yeah, I’ve had some talent and I’ve also had some lucky breaks along the way, but I never want to go back to that lifestyle. I enjoy the life that I live now, and that’s what keeps me so hungry. Secondly, I want to be the champion and I feel I’m destined to do that, and I feel I have what it takes. If I never even get the chance to fight for the title after being involved in the sport for so long would be very upsetting to me, but I feel I’ve got the potential.”

You don’t hear too many 36-year-old prizefighters talking about their potential, but Bisping may be the rare one who still has an upside. No, he’s not going to make drastic strides and all of a sudden show up in Glasgow as a jiu-jitsu black belt or an Olympic-level wrestler; but after a rough patch that included eye surgeries and a listless defeat against Tim Kennedy in April of 2014, he began to show signs of life in blasting through Cung Le. And after a loss to Luke Rockhold last November, it looked like Bisping finally got his mojo back when he decisioned CB Dollaway in April.

“I felt good in the Cung Le fight and I felt good in the Dollaway fight,” he said. “In the Rockhold fight we clashed heads early in the first round and that kind of affected my performance after that. It sounds like an excuse, but that is the reality of the situation. So I’ve always felt good, to be honest.”

And when you combine him being back at full strength health wise with an urgency in the gym that has him outworking fighters ten years his junior, Bisping may be on the verge of something big if he can put together a solid win streak. Of course, when this is mentioned to him, he’s already three steps ahead.

“I still feel I have a title run in me,” he said. “I haven’t had it yet, but Dollaway is a solid top ten opponent, and if I beat Thales Leites – hopefully when I beat him – he’s another good guy who’s on an impressive run right now, he’s inside the top ten, and I think that certainly proves to everybody that I have the potential. And then after that, maybe one good matchup against someone at the higher end of the top ten, and then maybe we could be talking about a title shot. That’s always been my goal, my passion, my drive.”

Some – including me – would say that Bisping’s body of work has earned him a crack at the belt. But he isn’t calling for anything or demanding his just due.

“I’ve been in the situation of being the number one contender several times,” the Manchester, England native said. “It’s not like the UFC hasn’t given me those opportunities. I’ve got nobody to blame but myself.”

Maybe. But with a win on Saturday and perhaps another one, it may be time for “The Count” to get his opportunity to become “King.” It’s still why Bisping gets up every morning to do this.

“I still want to be the champion, and I’m training like a guy that’s on a mission to be a champion,” he said. “Of course, this is my living and how I pay the bills, but I’m training to achieve that.”