UFC.com's Philip Ferraro takes a look at the career of Michael Bisping before his pivotal UFC on FX7 bout on January 19 against Vitor Belfort 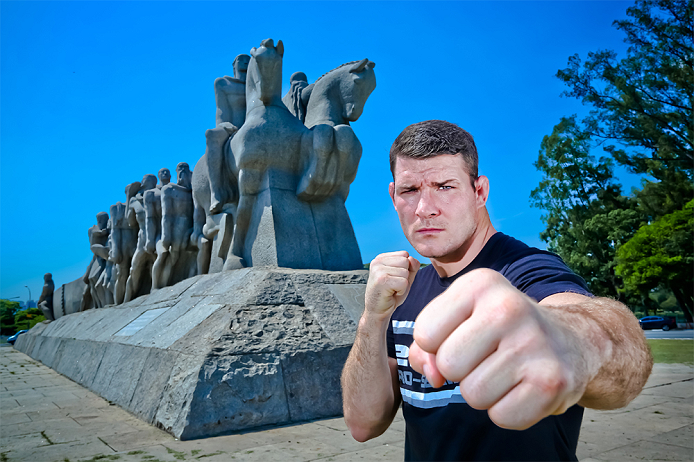 There was a time when Michael Bisping - who fights Vitor Belfort on January 19th in the main event of UFC on FX 7 in Sao Paulo, Brazil - didn’t know what to do with his life.   He’d dropped out of an electrical engineering course and worked a series of blue-collar jobs. But when he committed to MMA in 2003, the working-class kid from Manchester, England found some much needed direction.  In 2006 he reflected on his humble beginnings, saying, “You always think you’re going to be great and you’re going to do things, but then I got in my early 20s and I was quite disappointed. And if I was being realistic, my life was going nowhere really. And it was going nowhere fast and I wasn’t getting any younger.”

After going 2-0 as a pro, Bisping fought Mark “The Beast” Epstein, a standout UK fighter.  Just 24 years old and unpolished, “The Count” received a baptism by fire after he was dropped by a punch in the first round.  But the resilient Bisping rallied back to win by second round TKO.  Bisping then went on a tear on the UK scene, going 10-0.

In 2006, Bisping earned a spot as a light heavyweight on The Ultimate Fighter 3.  Part of Team Ortiz, he gave fans a glimpse of two of his defining qualities: his work ethic and occasionally sharp tongue.  Bisping had an opinion or two about some of his fellow contestants, but he was never distracted from the task at hand.  His efforts were rewarded as he finished both his opponents to enter the finale, where he TKOed Josh Haynes in the second round for a UFC contract. Watch fight

After a first round TKO victory over Eric Schafer (watch fight), Bisping was matched against Australia’s Elvis Sinosic in 2007 (watch fight). Against Sinosic, Bisping encountered his first moment of real adversity in the UFC’s Octagon. The Brit was dropped by a knee in the second round, and soon after Sinosic nearly secured a kimura.  But Bisping’s determination and superb conditioning make him a hard man to finish.  He quickly roared back to TKO the Aussie at 1:40 of round 2. Bisping was challenged once more in his next fight against fellow TUF 3 contestant Matt Hamill.  While elite wrestler Hamill had been a novice to MMA on the Ultimate Fighter, he showed new striking skills and scored on the feet against “The Count” in a close three round fight.  The judges awarded Bisping the decision, causing a sizeable outcry from the fans.  But he remained undefeated.

At UFC 78, Bisping faced his toughest test yet in the undefeated Rashad Evans.  Anticipation grew as the two engaging characters traded verbal barbs in the weeks before their fight.  But Evans prevailed, scoring takedowns on the Brit repeatedly for a split decision victory. Bisping had his first loss.

The loss sparked a move down to middleweight for Bisping, who wanted to avoid being outsized.  His 185-pound debut against Charles McCarthy was preceded by another entertaining war of words, but “The Count” scored a first round TKO victory.  After a win over Jason Day (watch fight), he took on exceptionally tough brawler Chris Leben.  In a disciplined performance, Bisping demonstrated the cerebral side of his game. He refused to be drawn into a slugfest with Leben, choosing instead to stick and move en-route to a unanimous decision victory.
Watch fight

In 2009, his successful run at middleweight earned him a spot coaching The Ultimate Fighter 9 against legend Dan Henderson, and a fight against the former two-division PRIDE FC champion. (Watch TUF season)  Not surprisingly, squaring off as opposing coaches bred plenty of hostility between the two.  In the second round of their bout, Bisping walked into a massive Henderson right hand that sent him crashing to the canvas.  Henderson followed up with another right for good measure, but Bisping was already out cold in one of the most brutal KOs in UFC history.   Bisping’s title aspirations lost steam, and fans wondered whether he could recover from the loss. Watch fight

Bisping’s chance to prove he could bounce back came in the form of a 2009 match against Denis Kang, a long time top international fighter.  Kang caught “The Count” with some heavy shots early, but Bisping weathered the storm.  In the Fight of the Night winner, he came back harder in the second round to finish Kang with strikes, putting an exclamation point on his return. Watch fight

Bisping was then matched against another legendary fighter like Henderson in the form of Wanderlei Silva.  It was another tight bout, but the Brazilian narrowly scored the decision win.  Bisping’s title run was stopped in its tracks.

But once again, Bisping came back better. The Brit won a decision over tough Dan Miller (watch fight) and the highly touted Yoshihiro Akiyama (Watch fight) in another bout that won Fight of the Night honors. At UFC 127 in February of 2011, he took on fellow contender Jorge Rivera, and before their fight, Rivera released a series of videos poking fun at “The Count.”  Bisping, a fighter who wears his heart on his sleeve, soon fired back with harsh words of his own. It was the most bitter in the long line of Bisping’s feuds, and he addressed his colorful pre-fight history, saying, “I’ve got a rep for talking smack, and I’m not saying I don’t talk crap here and there, but I’ve never started anything first. Look at my career and you’ll see guys like Dan Miller, (Yoshihiro) Akiyama, nothing but respect all the way.”

Bisping’s emotions were obvious in the fight, which turned controversial after he stunned a downed Rivera with an illegal knee.  Bisping went on to overwhelm Rivera in the second for a TKO victory.

Bisping reprised his coaching role on The Ultimate Fighter 14 opposite Jason “Mayhem” Miller.  There were plenty of heated verbal skirmishes.  But Bisping is a man who fights best when angry, saying in 2011, “In my opinion, I think I fight better when I’m - for want of a better word - pissed off. So for me, that does help. I’m emotional in and out of the ring, and before and after a fight I’m emotional, but generally when I’m fighting, I’m very, very focused and I’m focusing on what needs to be done as opposed to doing anything silly because of letting my emotions get the better of me.”

Miller had a solid first round but soon tired out.  Bisping poured on the pressure as he battered “Mayhem” for a round three stoppage.

Bisping again found himself close to a title shot when he fought Chael Sonnen in January 2012.  In another agonizingly close fight, Sonnen’s takedowns and control were enough to give him the win in the eye of the judges.

Bisping was forced to rebound from another frustrating defeat, and face a dangerous opponent in knockout artist Brian Stann on September 22, 2012.  Bisping, once little more than a striker, showed off the skills he’s picked up in close to 10 years in the game.  He repeatedly scored takedowns on Stann to earn a unanimous decision victory.

Bisping has had several near misses, but never quite strung together enough wins for a title shot.  But he’s stayed determined and continuously improved. In 2011, Bisping reflected on his time in the UFC saying, “I’ve been in the UFC for five years now. A lot of good fighters don’t last that long. And I’ve had to go from pretty much a UK-level striker to a well-rounded fighter while competing in the UFC. A lot of TUF winners have struggled in the UFC. Compare their records to mine and you’ll see while I’ve not achieved all I want to in my career, I’m not doing badly overall.”

In Vitor Belfort, he fights an extremely dangerous contender.  Belfort is an experienced knockout artist with fast hands and excellent grappling. It’s hard to predict the outcome of the fight, but it’s easy to predict how Bisping will show up.  He’s always in shape and he’s always game.  Now a father, Bisping once worked menial jobs for little pay.  A 2011 quote from “The Count” makes it clear why he works so hard.

“It’s been the best ride of my life. I remember (UFC President) Dana White saying some things when we came off The Ultimate Fighter and it’s fully lived up to everything he’s said and far exceeded it. Being part of the UFC family, I’m so proud and so happy with my life. I’m a lucky man. I get paid well, but I truly love my job. I love being a part of the UFC, I love being a professional fighter, and I love the rewards that it gives to me and my family. So it’s unbelievable.”