Mexico, the UFC is Here

"We've been waiting to come to Mexico for a long time, and we're finally here." - Dana White 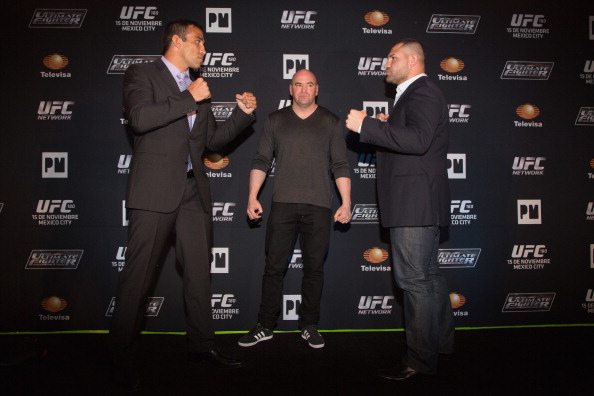 UFC President Dana White couldn’t contain his excitement. Calling Mexico one of the three “no brainers” when it came to the areas he, Lorenzo Fertitta, and the rest of the UFC brass wanted to hit as part of the company’s international expansion, he finally got to make it official Tuesday in Mexico City as he officially announced UFC 180, which will take place on November 15 at Arena Ciudad de México.

“We've been waiting to come to Mexico for a long time, and we're finally here,” White said at a press conference held at Polyforum Siqueiros. “A lot of things go into making a deal, and we're on the biggest, baddest network in Mexico now, Televisa, we're excited about it. We just launched The Ultimate Fighter last Wednesday, and we're bringing an unbelievable fight card for our first time down here in Mexico.”

That’s not an exaggeration either. Headlined by the UFC heavyweight title bout between champion Cain Velasquez and number one contender Fabricio Werdum, and a welterweight bout pitting Jake Ellenberger against unbeaten Kelvin Gastelum, the UFC 180 main card will open up with a bantamweight battle between Monterrey’s Erik Perez and former Ultimate Fighter competitor Marcus Brimage, followed by an important featherweight matchup between Dennis Bermudez and Ricardo Lamas.

And in lightweight action, sparks are certain to fly when lightweights Diego Sanchez and Norman Parke collide. Sanchez, coming off a controversial June win over Ross Pearson, has been lobbying for a shot on this card, and he’s more than excited to have his wish granted.

“It's a dream come true,” Sanchez said. “I feel that this is going to be a classic event. Mexico has been waiting for this for a long time and so has UFC and so have I. This is going to be a huge thing for me in my career and I'm extremely excited. I'm putting my heart and soul into the training, I have a great opponent, Norman Parke, and we're going to put a war on.”

Northern Ireland’s Parke, while happy to be fighting in Mexico, wasn’t mincing words when it came to his opponent.

“The Mexican people are kind of like the people in Ireland,” Parke said. “They come from a great boxing background, they're really into their sports, so I'm looking forward to making some fans and putting on a great reception for those guys. Me and Diego are going to put on a great fight and believe you me, November 15, I'm coming into the Lion's Den, but I'll tell you what - I'm going to rip his $#$% head clean off and take it back home to Ireland.”

That statement drew oohs and aahs, but the veteran Sanchez, winner of the first season of The Ultimate Fighter, has heard it all before.

“I'm excited to fight, I love to fight, and this guy's gonna try to take my head off and I welcome it because that's the type of fight I like,” he said. “I like when people come and try to take my head off because otherwise he's going to be running. I still see this guy running across the cage the whole time, but we'll see if he backs his mouth up when we get out there to the fight. I'm coming to fight.”

With that the roars overtook the oohs and aahs, and it was clear that while Velasquez was the most popular fighter on the dais, with Sanchez also garnering plenty of positive attention, Octagon newcomer Augusto “Dodger” Montano was without question the hometown hero.

“I'm very excited and emotional,” Mexico City’s Montano, who will fight an opponent to be named in a welterweight bout, said. “I am ready to give the audience what they're expecting. It was impossible for a Mexican to make it to the UFC and it's finally possible for a Mexican born and raised here. I'm happy, not only for me, but for the all the Mexican youth.”

Home to some of the most legendary boxers to have stepped between the ropes, fighters like Julio Cesar Chavez, Erik Morales, Marco Antonio Barrera, Salvador Sanchez, Ricardo Lopez, and Juan Manuel Marquez, just to name a few, Mexico is a hotbed of combat sports that White believes will soon dominate MMA.