'Merc With A Mouth' Adesanya Ready To Put On A Show

Israel Adesanya is the total package — an undefeated upstart with an exciting style, charisma for days and an undefined ceiling.

In less than a year, “The Last Stylebender” has gone from making his promotional debut to manning a place in the middleweight Top 10 and competing this weekend on the main card of the UFC’s annual stop at Madison Square Garden. Fans that followed him into the Octagon from kickboxing were buzzing about his arrival before he’d even set foot inside the eight-sided proving ground, and after he dismantled and dispatched Rob Wilkinson and cut a killer promo at UFC 221, everyone else was too.

While he’s still not through his rookie campaign, Adesanya has all the markings of a future star and potential title challenger, something he already believes fully, but is working hard to keep in check at the same time.

“They say, ‘don’t drink your own Kool-Aid.’ I’ll have a little sip, but don’t get drunk off it,” laughs the middleweight rising star, who squares off with Derek Brunson in the opening bout of Saturday’s UFC 230 main card this weekend in New York City. “I’m not going to get drunk off my own Kool-Aid.

MORE ISRAEL: The Game Is About To Change | Ever-Confident Adesanya

“I know where I’m at and I’m privileged to be in the position I’m in and I appreciate it, but I’m never going to assume that I’m done and I’ve clocked the game. I’ve barely even started. I started the game on Level 2, but I’m far from finished.”

Going from zero to contender in 10 months is a major accomplishment and a rapid progression for a competitor who had just 11 bouts under his belt when he stepped into the cage for the first time in Perth, Australia this past February, but it’s not at all surprising to Adesanya.

Under the guidance of Eugene Bareman and the team at City Kickboxing in Auckland, New Zealand, the 29-year-old worked methodically to hone his skills and challenge himself on the road to the Octagon so that once he arrived on the biggest stage in the sport, he was ready to shine.

“I took my time to get to the UFC and I took that time because I wanted to make sure I was well versed in different styles and different body types, different athletes from all around the world,” explains Adesanya, who followed up his initial victory over Wilkinson with decision wins over Marvin Vettori in April and Brad Tavares in July, setting up this weekend’s showdown with Brunson. 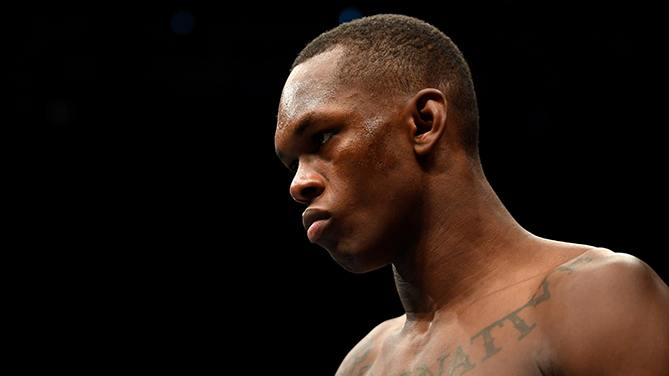 “I debuted in February and this is my fourth fight this year, but this is nothing. In 2016, I fought over 20 times, kickboxing and MMA, so this is nothing and I really did expect myself to get this far, this quick.

As much as Adesanya believes he’s the best middleweight in the world right now, he’s also happy to continue convincing others to what he already knows one step at a time.

His April meeting with Vettori was a step up in competition and an initial taste of the spotlight, at least in the UFC, and he passed. Three months later, he headlined a card for the first time against Tavares, a seasoned, savvy veteran, and blew him out of the water.

Now, he’s graduating to competing on a major Pay-Per-View event and taking on Brunson, a Top 10 fixture with proven power and a style that should pair well with Adesanya’s free-flowing, creative approach inside the cage.

“A true magician never reveals his secrets and never shows his hand,” he says with a chuckle. “You’ve got to move strategically in this game. If it ain’t broke, don’t fix it.

“I’ve been knocking people out on the feet, I keep ****ing them up with the standup. They can’t catch me on the ground. They can’t catch me on the fence. They can’t keep me there. Eventually, you guys will see my top game and you’ll see that Khabib isn’t the only mauler in MMA with his top game. You’ll see that off my back, I’m getting better and I’m learning. I’m catching a lot of slick s***, but I’m enjoying the learning process of this game and that’s what makes me really dangerous.

Adesanya’s rise in the middleweight division has coincided with an organization-wide ascent for fighters from Australia and New Zealand, including his teammate and “frenemy” Dan Hooker, heavyweight contender Tai Tuivasa and featherweight upstart Alexander Volkanovski.

Even in discussing where he fits within that uprising, the Nigerian-born standout’s thorough understanding of the bigger picture and his charisma shine through.

“I don’t really like the responsibility of being a ‘role model,’ because I’ve never called myself that and I’ve never claimed to be that guy,” begins Adesanya. “I want to keep the same energy and keep doing me, but I understand I’m sort of leading the way because of what I’m doing in the Octagon.

“Dan is the team captain; he’s the guy that can take charge when it comes to certain things,” he says of Hooker, who has gone 4-0 with four stoppage victories since moving to lightweight and is scheduled to face Edson Barboza as part of the December FOX event from Milwaukee.

Poised for his biggest opportunity of his career and a chance to fight in one of the most famed arenas in combat sports, the middleweight division’s “Merc with a Mouth” is ready to put on a show for everyone at Madison Square Garden and make quick work of Brunson.

Just woke up to pee...
What a night!! I got to feel the vibe of MSG before #UFC230 , soak in that energy.
But don't get it twisted, come saturday night, when it's time to dance under those lights...I will shine pic.twitter.com/yjwMwBHkDd
— Israel Adesanya (@stylebender) October 30, 2018

“It felt like I belonged there; that I’ve already done this before and I just have to make it happen,” he says of attending the Knicks game on Monday evening and getting a feel for the energy and atmosphere inside MSG. “I got to feel the vibe of the place — soak it in, appreciate it and now I’ve already seen it. I’ve done it already many times in my mind, but to be there and feel it, I’m already steps ahead.

“If I put the math together, he’s definitely not getting out of the second round,” he says of Brunson, offering a conservative prediction before changing his mind. “But probably not the first round because of his chin and because of my striking; it’s just different.

“Expect the unexpected,” he adds. “I always show up and show out; that’s just me.”