Merab Dvalishvili Knows This Is Only The Beginning

The rising bantamweight contender is excited to seize his moment at UFC 252.
By Gavin Porter, on Twitter @PorterUFCNews • Aug. 13, 2020

UFC 252 is the opportunity that Merab Dvalishvili has been waiting for.

When “The Machine” came into the UFC in 2017 he had a dream that he would be competing with the best bantamweights in the world, and after stringing together a dominant four-fight win streak, Dvalishvili finds himself slated to go to battle with veteran contender John Dodson. It’s Dvalishvili’s first matchup with a ranked opponent and a real chance to compete with the division’s elite.

Dvalishvili has lived up to his nickname by dominating his opponents with relentless pressure and wrestling. The native of Tbilisi, Georgia, who has only entered the Octagon six times, already holds the record for the most takedowns (39) landed in UFC bantamweight history. And while rag dolling his adversaries is something Dvalishvili is proud of, he believes that defeating Dodson will truly put him on the map.

“John Dodson is a big name and he’s a really good fighter. I have a ton of respect for him and he’s been at the top of the game for a long time,” the 29-year-old Dvalishvili said of his opponent. “He’s a two-time title challenger and has gone the distance with Demetrious Johnson, he’s knocked out TJ Dllashaw and earned a win against Pedro Munhoz. This is the type of guy I want to compete with and I’m just so excited for the moment.”

Dvalishvili wasn’t sure that he would be able to fight during the COVID-19 pandemic, but the UFC called and he was able to earn a victory in a short a notice fight against Gustavo Lopez at the UFC Apex in June. Dvalishvili’s desire to compete couldn’t keep him away for long, and just eight weeks later, he hopes he will be able to secure the biggest win of his career.

“I was hoping that they needed me, and I kept telling my team that I would fight at bantamweight, featherweight or lightweight. I’m always ready to go in the Octagon,” Dvalishvili said. “This fight with Dodson is a true challenge for me and if I want respect and I want to move forward in the rankings, I have to beat this type of true mixed martial artist.”

With training partners like Aljamain Sterling, Matt Frevola and Al Iaquinta, Dvalishvili has been able to consistently show his growth since joining the UFC. His rise has largely been in part to the work put in with those standouts and the grueling hours at Serra-Longo out in New York.

The support that Dvalishvili receives from his teammates blows him away and has helped motivate him to train harder than ever. 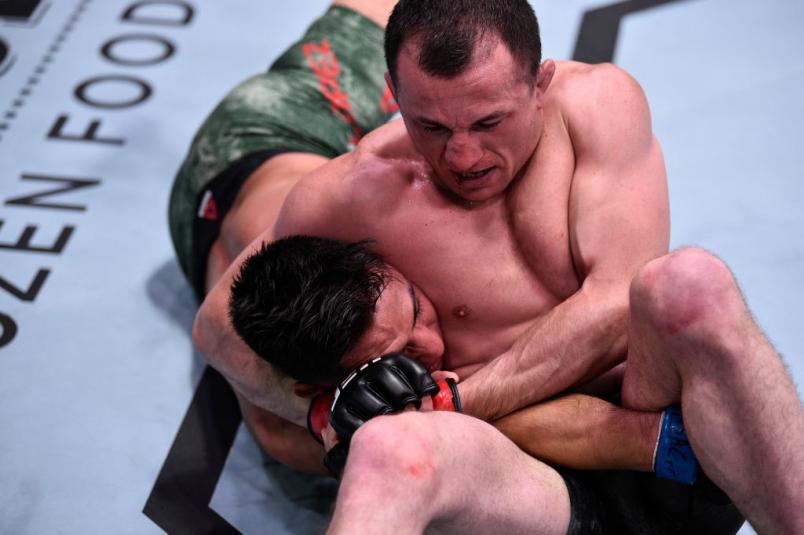 “It makes me so happy to see the respect they have for me and I know I have to keep working hard to keep that respect,” Dvalishvili said. “They showed me life lessons and helped me become the fighter I am. We really are a family and we all have each other’s backs.”

Dvalishvili will look to implement those learned lessons against Dodson on Saturday and continue moving his way up the bantamweight ranks.

“Dodson has a hard style for everyone, but none of that really matters because I believe in myself and my preparation,” Dvalishvili said. “I honestly just love to work hard and love fighting. I have a great team and all I want to do is fight. To fight the best is my dream, and while I’ve made it happen, I realize this is just the beginning.”

To watch the bantamweight showdown between Dvalishvili and Dodson, order UFC 252 on PPV. The event begins at 10pm/7pm ETPT and can be purchased on ESPN+.