As the story goes, when Robert Johnson disappeared from the Mississippi Delta as an average guitar player and then returned as a virtuoso, fellow musicians said he had sold his soul to the devil as the crossroads to receive this talent. Whether you believe such urban legends or not, there is no debate that Johnson, one of the most influential bluesmen of all-time, put his time in the proverbial “woodshed” to perfect his craft.

Alonzo Menifield can relate to this story, because when he scored a first-round finish of Daniel Jolly on the first season of Dana White’s Tuesday Night Contender Series but didn’t get a UFC contract, he took it as a chance to get better and even more prepared for an eventual call to the big show.

“It wasn’t like a sense of being lost,” said the unbeaten light heavyweight. “It was more like, ‘Okay, I’ll take it and gain experience,’ and that’s pretty much what I was doing. I was taking this as I’m learning more about the MMA world and the craft of fighting. So I just expanded my knowledge in boxing, wrestling, jiu-jitsu and Muay Thai and took it slowly, getting ready for when I do get into the biggest promotion.”

After the win in July of last year lifted his pro record to 4-0, the Texan got right back to work, stopping Jose Otavio dos Santos Lacerda in two rounds in December, and submitting Brice Ritani-Coe in a single round in February. Then DWTNCS came calling again, and Menifield now had a second chance to secure a spot on the UFC roster.

“For me, every fight has pressure because winning is the key and there’s no exceptions for losing,” he said. “So there’s always pressure in that aspect, but I like it. I took the experience, went away, because super good at the art of MMA and fighting. So when the big show came, I was like, all right, I’m ready to fight this guy and take him out.” 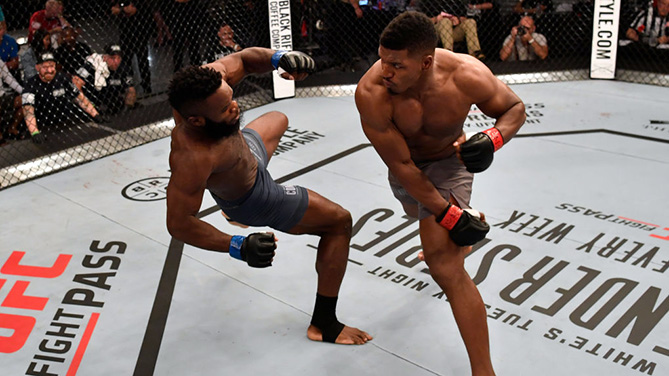 Dashawn Boatwright during Season Two of Dana White's Tuesday Night Contender Series, only on FIGHT PASS (Photo by Jeff Bottari/Zuffa LLC)" />It only took Menifield eight seconds to halt Dashawn Boatwright on episode one of DWTNCS 2 on June 12, and not surprisingly, he left Las Vegas with a UFC contract. And no, he didn’t have to sell his soul at the crossroads to do it.

“No, I did not,” laughs the 30-year-old Menifield, who clearly has the talent and charisma to give a veteran light heavyweight lineup a jolt and start returning it to its past glory. That’s looking from the outside. Does Menifield feel the same way?

“I definitely feel like I am that guy,” he said. “I bring a different aspect, and the funny thing is, I haven’t been able to use all of what I’ve been learning. I’ve been planning to be an adjustment fighter, so with that said, I’m just waiting to fight it out in the UFC and put on a great show.”

Does that mean he’s one of those guys who feels cheated by an eight-second knockout because he didn’t get to show off his whole game?

“Oh no,” he laughs. “I’ll take an eight-second knockout any day. I was super happy. As you could see, I was pumped and jumping around.”

He should be happy. Not just for the win and the contract, but because he’s now at a point in his life many believed he would never get to.

Back in California, Menifield and his brother Cecil were taken from their mother and put into foster care, ultimately being sent to several foster homes before a counselor at a shelter in Hollywood, Godwin Ezenwa, adopted the brothers.

“My wife asked me, ‘Have you ever thought about how you got here?’” mused Menifield. “And I just sat there recently, and thought ‘Oh yeah, it’s been pretty crazy.’ Truth be told, I just put it to the side and tried to break through and keep improving and I just repeat that and go and go.”

Football was his first ticket to something special, and as he acclimated to school, the combination of both led him to Texas A&M – Commerce. He left college with a degree in Criminal Justice, and while fighting, and not football, was eventually going to be his path, the greatest piece of this story is that he’s made it somewhere against all odds, providing a light for kids living the life he once did.

“I feel like I’ve been preserved just for that,” he said. “When the lights come on and I perform more and more and I become more of that figure, I definitely feel like kids or adolescents that are going through what I’ve been through can definitely look at me and say, ‘Hey, I can do it.’