Mendez Coasting Into the Main with Cain

"The UFC is putting together the two best fighters in the world bar none.  That sends a strong message and shows what they are willing to do to make the sport more successful." - Javier Mendez 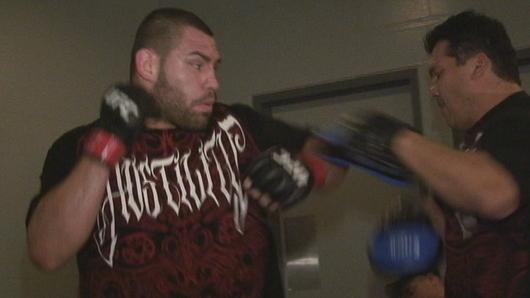 There is a fervor slowly brewing that has been amassing strength for a decade now and it’s beginning to sonically boom into the ears and eyes of the masses.  This rising fever pitch is the UFC debut on FOX on Saturday, November 12th, in which millions who have yet to experience mixed martial arts at its highest competitive level will have the opportunity to do so on free TV.

With the event centered around the storied heavyweight division’s two standouts - champion Cain Velasquez and number one contender Junior dos Santos - it is fitting that in the background lie those who have literally laid the foundation on which this momentous occasion can stand.  One such soul is Javier Mendez, the head trainer for Velasquez, whose personal history in the sport goes far beyond his work with the young champion.

“If you look back in the history I’m probably the only guy that’s been involved in UFC since 1996 that’s still there.  No one knows that I bet but I’ve been there since 1996,” said Mendez.

Mixed martial arts began for Mendez in July of 1996 at UFC 10 in Birmingham, Alabama, with his first MMA fighter, Brian Johnston.  It was an event that resulted in Johnston advancing to the semifinals of that night’s tournament after a first round submission due to strikes victory over Scott Fielder, only to lose to Don Frye in the same manner in his next bout.  The event however, marked a change in the career direction of Mendez, a former kickboxer.

“Brian Johnston made an impact for himself, so as a result I met (former UFC 205-pound champion) Frank Shamrock,” said Mendez.  “Then Frank Shamrock came to my gym and wanted to know if he could train there. Under my direction Frank never lost a fight.  He was the first UFC middleweight (205-pounds at the time) champion, then he became WEC champion and then he was the Strikeforce champion.  Frank never lost with me, and as a result of Frank coming to me, BJ Penn basically was around the gym and says to me ‘hey, one day Javier, when I’m done with the (Jiu-Jitsu) Mundials, that’s what I want - I’m going to focus on my jiu-jitsu and win that world title, then I’m going to want to come talk to you about doing MMA.’  I said sure, and of course BJ wins the Mundials and then he comes and asks me to train him.  So I started training BJ and as a result of BJ, then a lot more attention started coming to the gym and its pretty much history that everybody started coming in little by little and migrating.”

The word ‘migrate’ took a different meaning for Mendez growing up in San Jose, California.  One of five boys growing up under parents who were migrant workers, the life of a gym rat was never in sight as a youngster.

“We were too poor to get involved in sports, so I just did after school sports with my friends. I never got involved with any activities like wrestling or football or baseball because just getting enough to eat was a hardship within itself.  My dad was a forklift operator for a cannery with fruit.  My mom would work in the summers with all of us in the fields picking cherries, prunes, cucumbers and strawberries, and we would do that every summer after school.”

After an early beginning taking boxing lessons at 12 years old and then Tae Kwon Do after high school, Mendez gravitated towards kickboxing, eventually going pro and winning the light cruiserweight championship and light heavyweight championship.  The success yielded a gym and a departure from a real estate job to pursue in his words, ‘a dream that makes no money.’  However, from that point on, and many successful fighters later, he found and developed Velasquez, a fighter that he admittedly didn’t even want at first.

“The first time I met Cain Velasquez, they’re telling me we got this kid that has an incredible gas tank, he never gets tired but then I heard the word ‘Mexican’ and I was like ‘whatever, I’ve never seen a Mexican that’s a heavyweight that’s extremely athletic.’  I thought he was probably overweight, so I‘m not that interested in him.”

Then Cain popped through the door and I had to take a double look at him.  Then I watched him work out and the unbelievable discipline he had and I said ‘wow, this kid is special.’  Everything he did surprised me and still to this day he has the same discipline; he hasn’t changed one bit.  He’s not the greatest athlete but he’s the greatest fighter I’ve ever trained.”

Since Cain’s meteoric rise through the heavyweight ranks another has emerged with the same aura of invincibility in Junior dos Santos.  The two’s clash will mark a new phase in MMA’s development, and Mendez feels it is a great pairing.

“Junior dos Santos is by far the most dangerous opponent that we have yet to face; Junior is dangerous in every single area of MMA.  I think he chooses to stand more because that’s his preference, but Junior can wrestle, has jiu-jitsu, can kick and is a total MMA fighter.  The UFC is putting together the two best fighters in the world bar none.  That sends a strong message and shows what they are willing to do to make the sport more successful.  The most eyeballs are going to be on this and I call this the American Idol for MMA. The Finals, that’s what I call this.”

With the stage set, Mendez is readying his fighter’s mind for a long battle, but one where the victor where gallantly engage in the ultimate of glories.

“Cain’s focused for a five round war and I believe we’re going to win that five round war.  Anytime we fight someone on the caliber of Junior we’re not going to make any predictions on knockouts because its more of a disrespect to how great of a fighter Junior is, and if we’re thinking we’re going to finish him, that’s a bad mistake on my and Cain’s part to underestimate someone as dangerous as Junior. But I believe 100% we are going to win.”