Mendes’ Big Night Falters, But Respect Is Given, Earned 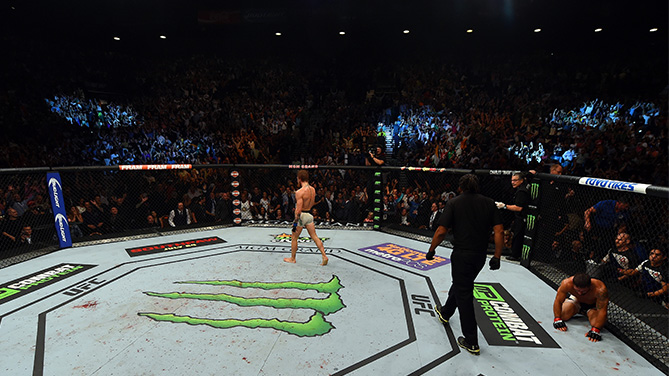 Chad Mendes had vowed to be the man who finally would shut up Conor McGregor. And for much of two rounds, it looked like he just might do it in stunning fashion.

Mendes, a two-time All-American wrestler in college, repeatedly had put the brash Irishman flat on his back with vicious takedowns. He was in complete control, bloodying McGregor’s face as he searched for leverage to sink a finishing submission chokehold. The interim 145-pound featherweight title was within the grasp of an underdog who was given little chance after accepting this fight as a replacement opponent for McGregor on just two weeks’ notice.

Then, everything changed in a matter of seconds.

McGregor wiggled out, jumped to his feet and went on the attack. It ended, suddenly, with a big overhand left -- leaving

Mendes the victim of a technical knockout at 4:57 of the second round Saturday night at a wild UFC 189 main event.

“The guy is so tough,” said Mendes (17-3) afterward, still looking a little shocked at the sudden turn of events. “He talked. But he backed it up.”

The legend of Conor McGregor had grown.

But Mendes also had earned something in defeat: Respect.

“Sometimes your mind is willing and your body’s not,” he said. “There’s not much more I can say other than Conor was the better man tonight. I’d like to get back in there against him with a full training camp. But I just came up short this time.”

Mendes entered the fight as the No. 1 contender after taking the place of featherweight champion Jose Aldo, who had withdrawn with a rib injury. But this fight was all about the outspoken McGregor, who quickly has established himself as the premier trash-talker in the UFC -- if not in the entire sports world.

The Irishman re-focused his vocal cords on the 5-foot-6 Mendes, who he called a “midget,” adding that he would be left unconscious within the opening four minutes of the fight.

But Mendes, 30, matched McGregor in the pre-fight verbal sparring -- syllable for syllable -- making his own prediction about what would happen to the brash Irishman.

“I’m going to show him what the hell American wrestling is all about,” Mendes said. “I’m going to put him on his back and punch a hole in his face.”

Mendes was raised in Hanford, Calif., which is in the heart of the state’s agricultural Central Valley. While he always was small in stature, Mendes came up big on the wrestling mat. He eventually became an NCAA star at Cal-Poly before making his way to Team Alpha Male in Sacramento, where he trains with UFC bantamweight champ TJ Dillashaw and former belt-holder Urijah Faber. 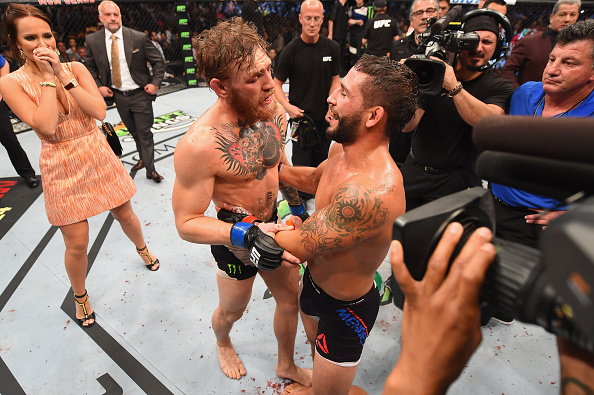 The plan for Mendes was no secret. Get McGregor on the canvas, and maul him with grappling.

McGregor began the fight by taunting Mendes as he punched and kicked at will. But when Mendes body-slammed the Irishman to the ground three times and delivered a cut to his right eye with punches and elbows, a real fight began.

Through it all, McGregor kept on talking.

“The guy didn’t stop talking (expletive) the whole time,” Mendes said. “I’d land a giant elbow on his face and he’d say, ‘That’s all you got?’”

But in the second round, it seemed like Mendes had more than McGregor could handle. Mendes spent three-and-a-half-minutes grinding him down -- much to the consternation of the pro-Irish crowd. But when McGregor escaped, it was done less than seconds later as Mendes was pounded senseless by a ruthless combination of punches.

“I’m not going to trash-talk Conor because he won the fight,” Mendes said. “But I felt like I was in complete control on top. There wasn’t a thing he could do. I made the mistake of going for the submission. I should have just stayed on top to the end of the round, but I didn’t. And it was a mistake.”

On one hand, this was a bitter disappointment for Mendes. This was the third time in his career that he had lost a title fight -- twice before losing championship bouts to Aldo. But considering how well he battled as a late replacement, it was an impressive performance. And afterward, two men who have seemed to genuinely dislike one another, embraced in a long hug as the crowd roared.

“I respect Chad,” McGregor said afterward. “I respect him for making that walk.”

It was a sentiment that went both ways.

“When you’re in the cage, it’s a feeling that nobody else can understand,” Mendes said. “Most people would never do this. We train our entire lives for this and sacrifice so much. You really have no choice but to gain a respect for each other.”

Mark Emmons is an award-winning veteran sports journalist and a regular contributor to UFC.com. Follow him on Twitter at @markedwinemmons