Get ready for "Minotauro" Nogueira's UFC RIO bout with Brendan Schaub this weekend with a look back at his most memorable bouts... 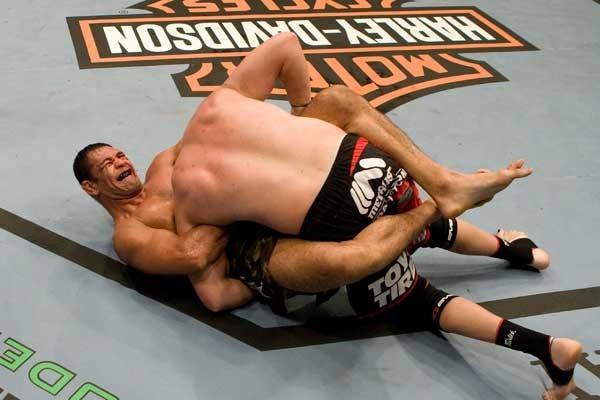 This Saturday night, Rio De Janeiro, Brazil will be treated to the first professional appearance of one of mixed martial arts’ legends (and a native son) Antonio Rodrigo “Minotauro” Nogueira. But before his UFC RIO bout with fellow heavyweight contender Brendan Schaub, let’s revisit the most memorable moments of the former UFC / PRIDE champion’s storied career.

Heath Herring I – November 3, 2001 – PRIDE 17
Result – Nogueira W3
With Nogueira 13-1-1 as a pro, his reputation was growing after PRIDE wins over Gary Goodridge and Mark Coleman. But it wasn’t until his three round win over Herring that the entire fight world got tuned in to what Nogueira was all about. Fighting in PRIDE’s first heavyweight championship bout, Nogueira showed that he wasn’t just a jiu-jitsu player as he rocked Herring standing and freely exchanged with him throughout the bout. But what got Nogueira the win was his spectacular ground work, which kept Herring guessing throughout the three rounder that former UFC heavyweight champ and color commentator Bas Rutten called “The best heavyweight fight I’ve ever seen and the most technical.”

Enson Inoue – February 24, 2002 – PRIDE 19
Result – Nogueira Wsub1
Three months after winning the title, Nogueira was brought back with what most considered was a gimme defense against the game but outgunned Inoue. And if you look at the final result, you would say that everything went according to plan. But what made this fight special was Nogueira’s rapid fire submission attack that left Inoue helpless and eventually put him to sleep. From a kimura and guillotine to a shoulder lock and the finishing triangle choke, this was a master submission class from a master of the game.

Bob Sapp – August 28, 2002 – PRIDE Shockwave
Result – Nogueira Wsub2
Bob Sapp would never be seen as a technical wizard, but at 6-5, 350 pounds, he certainly was a powerful handful for anyone he stepped into the ring with. That was the case when he took on Nogueira, picked him up moments into the bout and sent him to the canvas repeatedly with piledrivers. Some feared for Nogueira’s safety, but as “Minotauro” told me later, he was just biding his time, waiting for Sapp to get tired. By round two, the big man was exhausted and Nogueira put him away with an armbar, and it was here where the legend began.

Fedor Emelianenko I – March 16, 2003 – PRIDE 25
Result – Emelianenko W3
From 2000 to 2003, a span of 14 fights, Nogueira was unbeaten and considered to be one of the best heavyweights in the game. But no one stays on top forever, and after an exhaustive 2002 that saw him fight five times, he met his match in Russia’s Fedor Emelianenko. Yet despite a broken nose suffered early in the bout, Nogueira wouldn’t be put away by Emelianenko’s ground and pound attack, as he went on to lose a three round decision.

Mirko Cro Cop – November 9, 2003 – PRIDE Final Conflict 2003
Result – Nogueira Wsub2
After a controversial win over former UFC heavyweight champ Ricco Rodriguez, Nogueira was tabbed to take on feared Croatian striker Mirko Cro Cop for the interim PRIDE belt, which was in limbo due to an Emelianenko injury. And throughout the first round, Nogueira was on the receiving end of everything Cro Cop threw at him. An ugly defeat seemed to be in the cards for the Brazilian, but like a character in a monster movie, he just wouldn’t go away, and in the second round he was able to get Cro Cop to the mat. Moments later, he armbarred his opponent and wore the PRIDE championship belt once again.

Josh Barnett I – September 10, 2006 – PRIDE Final Conflict Absolute
Result – Barnett W2
From the time of the Cro Cop fight to his last bout in PRIDE, Nogueira would post an impressive 8-2, 1 NC record, an amazing feat any way you slice it. But the most memorable bout of that string wasn’t any of the eight victories, but a split decision loss to former UFC heavyweight champ Barnett, who went back and forth with Nogueira for two hard-fought rounds before being judged the victor in a fight many thought could have gone the other way.

Josh Barnett II –– December 31, 2006 - PRIDE Shockwave 2006
Result – Nogueira W3
In what ultimately turned out to be ‘Minotauro’s last PRIDE fight, he went out with a bang on the traditional New Year’s Eve show by avenging his loss to Barnett. Again, it was a closely contested battle, but with the extra third round to use to his advantage, the tireless Nogueira pulled away in the final frame, avoiding a Barnett submission attempt to pound out a unanimous decision win.

Tim Sylvia – February 2, 2008 – UFC 81
Result – Nogueira Wsub3
In July of 2007, the PRIDE star began his quest for a UFC heavyweight title with a tougher than expected decision win over old rival Heath Herring at UFC 73, and things got even rougher in his battle against Tim Sylvia for the interim crown. But after taking a two round thrashing, Nogueira came back and finished “The Maine-iac” via guillotine choke in the third frame. As “Minotauro” explained afterward, “I played his game for almost three rounds. He played my game for two minutes and I won the fight.”

Randy Couture – August 29, 2009 – UFC 102
Result – Nogueira W3
Following the win over Sylvia, Nogueira got introduced to a whole new fanbase thanks to his stint as a coach on The Ultimate Fighter’s eighth season. That was the good news. The bad was his second round TKO loss to opposing coach Frank Mir at UFC 92 in December of 2008. It was the first time he had been knocked out, and many believed that the years of wars had finally caught up to him. But when he stepped into the Octagon against fellow legend Randy Couture at UFC 102 in 2009, it was like time stood still as the two went at it tooth and nail for three classic rounds. When it was over, Nogueira had one of his biggest career wins, and the fans got a fight they would never forget.