"It doesn’t matter how you’re doing, you’re in there to fight and to
finish the guy. For a while, I was looking at it as more of a sport.” - Nate Marquardt 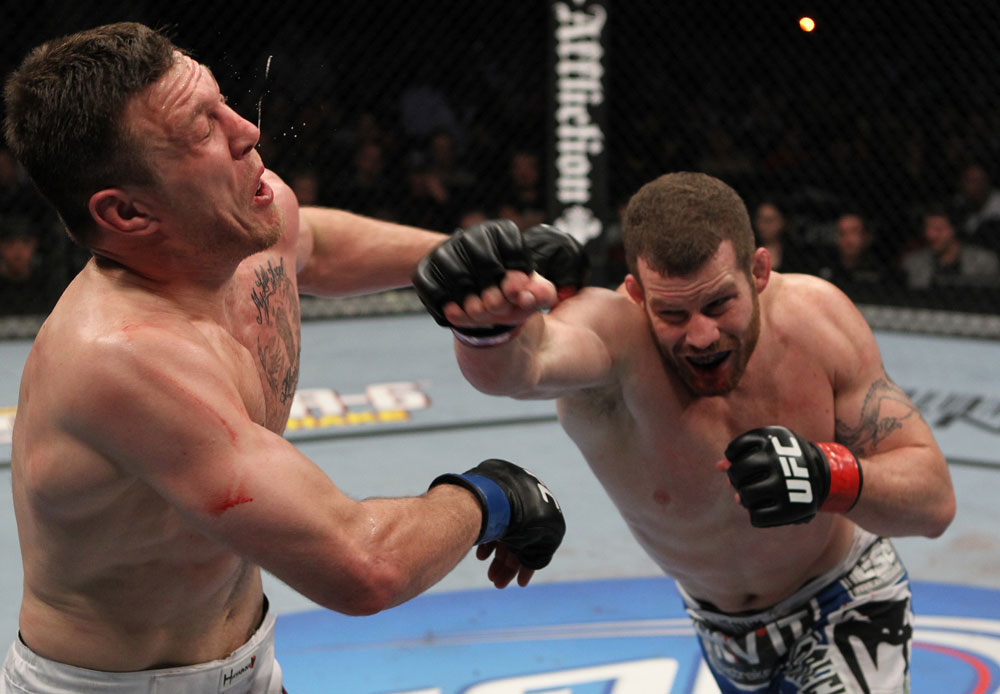 Longtime contender Nate Marquardt had been a fixture in the UFC middleweight division since his debut in the organization in 2005, but on June 26th in Pittsburgh, he will begin a new chapter in his career in the welterweight class.

But before he begins his assault on the 170-pounders, we’ll recap where “Nate The Great” has been thus far in a memorable MMA run of over a decade.

W2 Shonie Carter – September 24, 2000 – Pancrase 2000 Anniversary Show
Marquardt turned pro in April of 1999, three days before his 20th birthday, and by the end of that year, he was 6-1 and fighting in Japan. It was a whirlwind ride for the youngster, who made an international statement on September 24, 2000 by defeating Kiuma Kunioku and Shonie Carter on the same night to become the first middleweight King of Pancrase. As Marquardt told me back before his 2001 bout against Gil Castillo, “It was pretty unbelievable.  Actually it was kind of shocking because it was something that I had only dreamed about when I was younger, watching older fighters like Funaki and Shamrock.  It was pretty unbelievable, and it took a few months for it to actually set in that I had won such a big title.”

L5 Gil Castillo – July 18, 2001 – IFC Warriors Challenge 14
Following his win over Carter for the King of Pancrase title, Marquardt fought three more times in Japan before what he hoped to be a triumphant homecoming against unbeaten grappling ace Gil Castillo. It wasn’t meant to be, as Castillo earned a five round split decision win, but it was a memorable battle between two of the best in the world at the time, and reminded US fans that Marquardt was going to be a force to be reckoned with in the future. As for Castillo, the win propelled him into the UFC, where he fought for the middleweight (against Dave Menne) and welterweight (against Matt Hughes) titles. As for Marquardt, it was back to Japan.

W3 Dean Lister – January 25, 2007 – Ultimate Fight Night 8
After the loss to Castillo, Marquardt continued to ply his trade in the Land of the Rising Sun, returning to fight in the States only once over the next four years, a first round win over Steve Gomm in a 2003 IFC match. In Pancrase, he certified himself as a star, with wins over the likes of future PRIDE standout Kazuo Misaki (twice). But following his May 2005 victory over Izuru Takeuchi, Marquardt vacated the King of Pancrase crown and made his long-awaited signing with the UFC. He won his first three Octagon bouts over Ivan Salaverry, Joe Doerksen, and Crafton Wallace, but didn’t really set the world on fire. His win over Dean Lister did the trick though, as he scored a lopsided victory over the jiu-jitsu wizard that saw him hurt and drop his opponent numerous times throughout the three round scrap. And now with a perfect 4-0 Octagon record, his next fight would be for the title.

TKO by 1 Anderson Silva – July 7, 2007 – UFC 73
By the time Marquardt stepped into the Octagon to face Anderson Silva for the UFC middleweight title, “The Spider” had wrecked Chris Leben in 49 seconds, did a similar smash-up job on Rich Franklin, and submitted a Jiu-Jitsu black belt in Travis Lutter. Marquardt, who had been around the MMA block more than once, bought into what everyone was saying about the champion, and ten seconds before the end of the first round, he was stopped and sent back to the drawing board. “I started to believe what everyone was saying about how dangerous he was and what a good standup fighter he was,” he told me after the fight. “Looking back, I let everyone’s perception of the fight kinda change my view of the fight as well. I should have just gone out there and fought my fight. I started out that way, and through the fight it kinda changed. To be honest, I believe I’m a better standup fighter than he is and I believe I’m more dangerous than him, and I should have kept that frame of mind the whole fight. And all of a sudden he caught me with a shot right at the end of the round, and instead of attacking I went into defending mode.”

TKO3 Wilson Gouveia – February 21, 2009 – UFC 95
Slowly, but surely, Marquardt fought his way back into the middleweight title picture, submitting Jeremy Horn and stopping Martin Kampmann, with only a controversial decision loss to Thales Leites marring his run. But it was in his third round stoppage of Wilson Gouveia at UFC 95 that the MMA world started to think, ‘hey, I wouldn’t mind seeing Silva-Marquardt II.” And the reason for those sentiments came primarily from Marquardt’s finish of Gouveia, which encompassed a dizzying array of striking techniques that looked like they came straight out of a video game. It was a “new” Nate Marquardt, but as he explained, his in the Octagon mean streak was always there, it just needed a little prodding to make itself seen again. “I think I’ve always had that mean streak in me, and I kinda lost it there for a little while just because certain things changed in the way I was fighting,” he said. “Then the loss to Anderson (Silva) gave me it back.”

KO1 Demian Maia – August 29, 2009 – UFC 102
If the stoppages of Kampmann and Gouveia made people sit up and take notice when it came to Marquardt’s worthiness for a return bout with Anderson Silva, his 21 second blitz of Demian Maia got people stomping their feet for “Nate the Great” to get a rematch. And again, it wasn’t just Marquardt’s physical gifts earning him spectacular victories, it was his renewed mental approach to the game. “It is a sport, but it’s also a fight,” he said. “It’s not a game. You’re out there and you can really get hurt. You could be winning the fight, but at any moment, if you make the wrong move, you can get knocked out or choked out, and vice versa. It doesn’t matter how you’re doing, you’re in there to fight and to finish the guy. For a while, I was looking at it as more of a sport.”

W3 Dan Miller – March 19, 2011 – UFC 128
Following the Maia bout, Marquardt went through a three fight stretch that would have tried the spirit of any fighter, as he sandwiched heartbreaking decision losses in title eliminators against Chael Sonnen and Yushin Okami around a first round TKO win over Rousimar Palhares. But instead of moping and wondering what his next step would be, Marquardt returned to the gym with a new passion for the game as he started the road back to the title. “I still love the sport, it’s still my passion, and I’m very blessed and fortunate that it is,” he said. “For this fight especially, I have this renewed passion and motivation to get into the gym and give a hundred percent every day, and that’s what I’ve done for this camp. I really feel like I felt when I was 20 years old and training for fights over in Japan. I feel hungry and I feel like an animal when I’m in the gym.” The recipient of the invigorated Marquardt’s attacks was scheduled to be Yoshihiro Akiyama, but after the tragic earthquake of 2011 devastated Akiyama’s home country, New Jersey scrapper Dan Miller stepped in. It didn’t matter, as Marquardt put together a disciplined three round win in what turned out to be his middleweight swan song. Now it’s off to 170 pounds, where Rick Story awaits on June 26th.