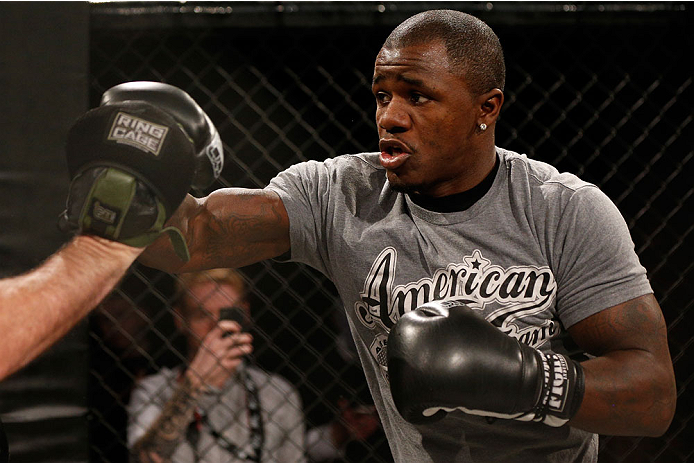 If you do it right, life is a continuous education process. It’s what allows a 40-year-old to do things he wouldn’t have thought of doing at 20, while still finding out that there’s even more to do at 60. For most of us, that process takes place in private, far beyond the probing eyes of the media and fans.

Melvin Guillard wasn’t that lucky. From the time he entered the UFC in 2005, the New Orleans native has been under the spotlight, and it hasn’t always been pretty. Yet now, Guillard is still standing, one of only two members of The Ultimate Fighter season two cast (Rashad Evans is the other) to still hold a place on the roster. That fact alone may be more impressive than any of his knockout wins, but if you think he’s done learning, think again.

Case in point, his Saturday co-main event bout against Michael Johnson. The two lightweights were former teammates at the Blackzilians camp in south Florida, but in the lead-up to their meeting at the O2 Arena in London, Guillard has not been shy in letting people know that they weren’t exactly best friends during their time together.

“I wanted to fight him since I left the Blackzilians,” said Guillard. “We’ve had a few words at some fights and when (original opponent) Ross (Pearson) pulled out, I said I wanted to fight him. We were never friends. We only trained together. I never hung out with him outside the gym and I never really cared for him because he has this ‘I’m the s**t’ attitude and he’s not the s**t. So there is a little bit of bad blood there.”

It’s not the first time “The Young Assassin” has had a little pre-fight heat with an opponent, and probably won’t be the last. But the most notable feud was with veteran Rich Clementi, who was a staple on the Louisiana fight scene when Guillard was making his bones in the sport. The two had a falling out, and at UFC 79 in December of 2007, they had the opportunity to settle their score in the Octagon. How heated did it get? Let’s just say that on a card headlined by Chuck Liddell-Wanderlei Silva and Georges St-Pierre-Matt Hughes, Guillard-Clementi was the fight where the combatants had to be kept as far away from each other as possible before the opening bell.

Fired up by anger and emotion, Guillard didn’t last long with the wily veteran, getting submitted in the first round. A little over six years later, the 30-year-old Guillard won’t let that happen again.

“I learned that lesson when I fought Rich Clementi,” he said. “I was so angry, my mind was cloudy and I had bad judgment. I still feel that you’ve got to fight with emotion. I don’t like anybody when I step into the ring against them. It can be any of my friends. Me and Cowboy (Cerrone) – we fought each other and I didn’t like him for the time we were fighting. But it’s not emotion to where I’m going to be angry. I’m gonna smile in his face right before the time I punch him in the face. And I learned that from watching Jon Jones. He’s so calm when he attacks people, and that’s the way I fight now. I’m very aggressive, but I like to say I took a page out of Jon Jones’ book. I want to be really calm but aggressive at the same time. I don’t go crazy because then you end up in a bad position, and sometimes you end up getting submitted. That’s happened to me before.”

He insists that it won’t be the same scenario against Johnson, whose skills he does respect.

“I’m not taking anything away from Michael Johnson,” he said. “He’s a good fighter. The kid got game and he’s got a great trainer in Henri Hooft.”

But the way Guillard sees it, the thing he brings to the Octagon night in and night out is something you can’t learn in the gym. You either have it or you don’t.

“I feel like I bring another dynamic to the fight game,” he said. “I was born to fight. When wrestling found me, it was like a gladiator sport to me, and I felt like that was one man against the whole world to define who he is as a person. And from wrestling, came MMA, and I said ‘I want to be a UFC fighter; that’s what I want to do for a living.’”

He’s been fighting ever since, whether it was on the streets of New Orleans, where he protected his little brother from bullies, or in the ring and cage, where the rules were different, but the intent was the same. In Guillard’s world, you get the other guy before he gets you, and in his 12 UFC wins, seven knockouts prove that he comes out on top of that equation more often than not.

“It was something I knew I was great at since I was little,” he said. “Back then, it was dangerous because I grew up in rough neighborhoods, but the blessing of it today is that when I step in that cage against other fighters, I’m not scared. I’ve seen guys I should be scared of. I’ve been around killers, and most of the guys I step in the cage with, they’re not fighters; they just learned how to fight. They’re not born fighters. Yeah, some of those guys’ technique might be a little better than mine, but when you have raw, uncut talent for something, I think it outweighs learning something technically. And I think that’s what I bring to the table.”

Or more succinctly, “Win, lose, or draw, they’re gonna know they’ve been in a fight.”