"My goal right now is to get some quality wins. I just
turned 30 this year, and if the title comes, it will come. But like
everybody else, you gotta earn it." - Melvin Guillard 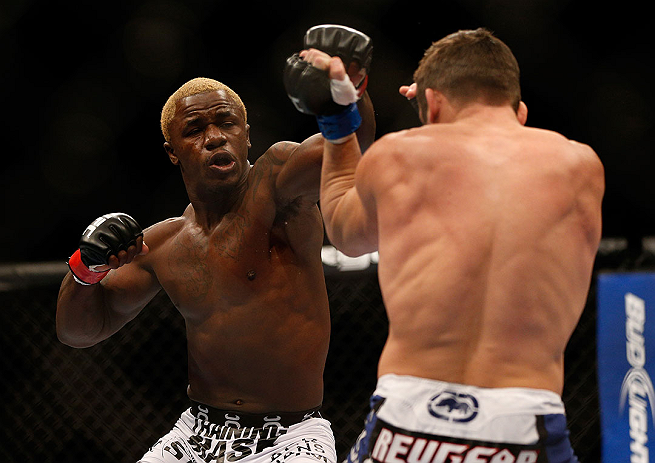 Change is good. For UFC lightweight veteran Melvin Guillard it was also necessary.

The always affable “Young Assassin” can joke about it now, paraphrasing middleweight boxing great Marvelous Marvin Hagler when he says “It kinda makes you soft when you’re at home and you’re going to sleep in a king size bed,” but after his UFC 155 loss to Jamie Varner last December, he needed to get out of South Florida, his training home for three fights in 2012.

“Living in South Florida is great, but it wasn’t great for training for me,” said Guillard, who defeated Fabricio Camoes but lost consecutive bouts to Donald Cerrone and Varner, leaving him at 1-4 in his last five bouts.

Following his decision to leave the Blackzilians squad in Boca Raton, Guillard thought about a return to the Jackson’s MMA team in Albuquerque before deciding on Denver’s Grudge Training Center team, led by Trevor Wittman.

“I’ve known coach Trevor for years, and I got to work with him when I fought Cowboy (Cerrone) in Denver because my coaches weren’t in town yet. So we crossed so paths so many times, it was just destined for us to link up. He’s a really good, seasoned boxing coach, he’s trained a lot of world champions, and I figured if anybody can get me back to my boxing, which is my strong point, it would be him and coach Jake (Ramos). He (Ramos) is just like Trevor. It worked out great for me, and plus, I have a very outgoing personality, and this is the first gym in a long time where guys accept my personality for what it is, and I can be myself. There are a lot of great guys here, and it almost has the same feel as Jackson’s. It’s just a different group of guys.”

And if it weren’t for the daily trips to the golf course between training sessions and his video game playing, you could say the 30-year-old New Orleans native was going old school Rocky IV in preparation for his Saturday fight against Mac Danzig.

“We have a fight house here in Denver, but I’m still in the basement,” he laughs. “But you know what, living in that basement ain’t so bad. It gives you a chance to get back to your roots and get hungry again. So sleeping in the basement on a little twin mattress makes all the difference.”

Working with the strike first, ask questions later Wittman may really be the difference maker in allowing Guillard to recapture the explosive striking attack that put his name on the UFC map in the first place and helped him to a five fight win streak in 2010-11 that had him in serious title contention.

“Here, I get to get back to my boxing, sprawl and brawl, and those are the things that made me the fighter I am in the UFC and had me winning,” said Guillard. “And I want to get back to winning, so I think coming out to Denver to train with Grudge was the best thing that ever happened to me.”

It’s a familiar refrain from fighters switching camps to recapture previous magic, but in Guillard’s case, it may be true simply because something wasn’t clicking in the last couple years. He was either too aggressive or not aggressive enough, too focused on his striking or not focused enough. In other words, he couldn’t find the happy medium that would let him use all his tools and turn a 1-4 streak into perhaps a 5-0 run.

“I could easily be on a winning streak, but it was just the way the cards were dealt,” he said. “That’s just the nature of the beast in this game. Like the Varner fight, it’s a fight I kind of thought I won, but when I went back and looked at it, I gave up too many takedowns. Some fights are hit or miss and that’s why when you go into these fights, you have to execute your game plan, and against Varner I didn’t execute my game plan well enough and he outscored me in takedowns and I think that was the deciding factor. It’s a seesaw of a sport, and you have the ups and downs. Two years ago, I was on a five fight win streak, and all of a sudden I hit a downward spiral and these losses. It happens. Right now I just want to pick myself up off the ground and keep moving forward. My main goal from the beginning was to stay in the UFC throughout my career, and right now that’s what I need to do. So this fight is a very important one for me to keep my job in the UFC.”

That’s the fight game in a nutshell. One day you’re talking title shots, the next you just want to keep your place on the roster. But Guillard is nothing if not resilient, and despite his 64 pro fights, he still believes that at 30, there’s plenty of time left for him.

“My goal right now is to get some quality wins,” he said. “I just turned 30 this year, and if the title comes, it will come. But like everybody else, you gotta earn it. I thought it was gonna come a lot easier when I was on a five fight win streak, but it was a wakeup call to let me know that I’m in the toughest division in the UFC right now, so I have to work even harder to get to that goal of a title. But right now, I’m not thinking about a title; I’m thinking about staying in the UFC and keeping my job.”