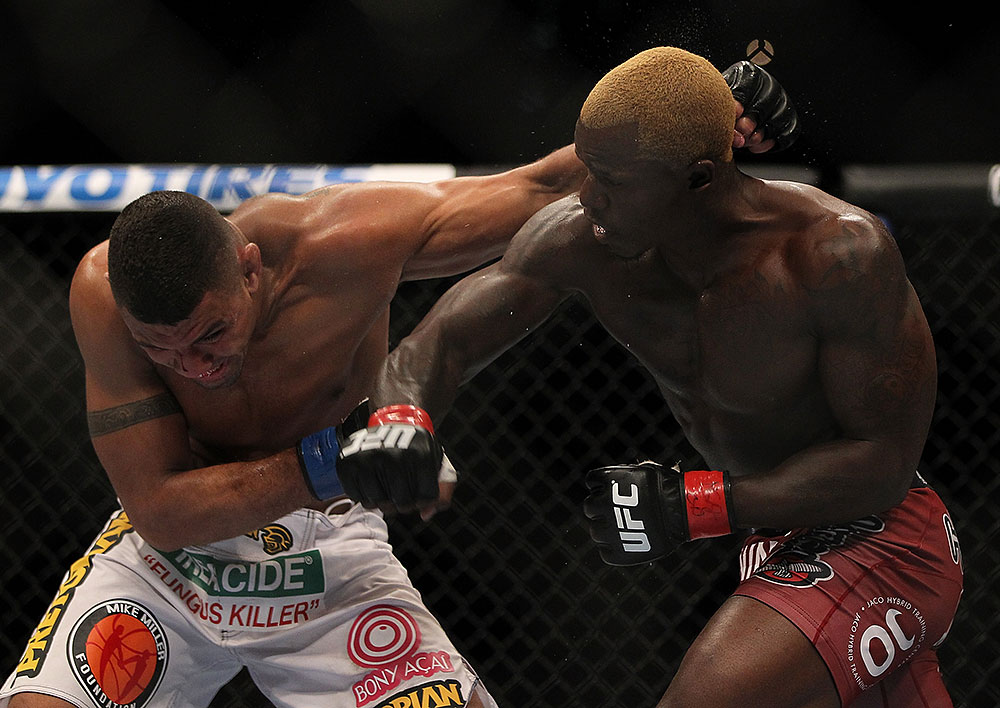 When it was announced that Melvin Guillard was going to fight Donald Cerrone at UFC 150 this Saturday, just a little over a month after going three rounds against Fabricio Camoes, many wondered how “The Young Assassin” would react to such a short turnaround time.

Short? Guillard considers two fights in a month a vacation compared to his early days in the sport.

“I’m a fighter and I love to fight,” he said. “Growing up, when I first started fighting, fighting two, three times, and sometimes six times in one month was normal for me. So fighting this close back-to-back kind of brings back memories of my younger days.”

He’s not kidding when he says younger days. Still more than seven months away from his 30th birthday, the New Orleans native has been fighting in one way, shape, or form since he was 14, first as an amateur before turning pro at 16.

“I’ve been at it for a long time,” he laughs as he delivers the understatement of the summer. “And even when I turned 16 and turned pro, it was about grinding, and just fighting to make a paycheck. Back then I was making five and five, which was 500 and 500, a thousand and a thousand, and I was living off that money. That was part of the reason why I chose to fight so much at that time.”

But in an odd way, fighting Guillard wasn’t just something he was good at; it was a way for him to bond with his father, who passed away in 2006, in a different way than most teens and their dads.

“My dad went to every fight, he signed my pro license, and me and my dad were like best friends, so we got to hang out all the time,” said Guillard. “He would go to the bars, watch me fight, take me home, and I even had one of my wrestling buddies, Terry Verdun, he would fight on Friday nights with me. We would go and fight together and just beat people up. That was my hangout, and that was the thing that I was doing because I was hanging out with my high school friend and my dad. Then it blew up so big at home for me to where everybody from home would come and watch me fight. So then I would make money from selling tickets in the neighborhood, and I would have my whole neighborhood coming out once or twice a month to watch me fight and be the main event at the club called Main Event.”

Guillard would pile up win after win, and knockout after knockout, some sanctioned by the local commission, some not. It was a heady time for the aspiring UFC fighter, even if he didn’t know at the time whether the UFC was going to be the worldwide juggernaut it is today. The adults around him at school were even less optimistic.

“Fighting in the UFC was always my childhood dream and I knew back then that they didn’t make a whole lot of money doing it, but somewhere in there, I thought to myself that this sport might just blow up and take off and it could be big, and I was right,” he said. “I even had schoolteachers and principals, people that were elders to me and mentors that I looked up to, telling me that I was crazy for trying to be an MMA fighter. They thought it was violent and brutal, that guys always got hurt and didn’t make any money, and now those same people are looking at me like ‘kid, you must have known something we didn’t know at the time.’ So it’s definitely refreshing and cool to know that I chose something that other people actually doubted, and I was right about it.”

Nearly 14 years after the first time he put the gloves on and got paid for it, Guillard is co-headlining a major UFC event in Denver, and with wins in six of his last eight fights, a big win over Cerrone can put him in the conversation for a world title shot at 155 pounds. And that’s precisely why he took the fight.

“Right now, fighting in the lightweight division, it’s hard to rack up all those wins because everybody’s beating everybody, and I think it’s really based off of picking the right fights,” he said. “I think the Donald Cerrone fight makes all the sense in the world because not only is he a former teammate, but he’s a tough individual and he’s a highly-respected fighter, so a win over him can definitely start getting me back in talks for a title.”

Now fighting out of the Blackzilians camp in Florida, Guillard’s friendship with Cerrone, who he trained with at the Jackson-Winkeljohn MMA gym in New Mexico, has been one of the key storylines leading up to the bout, and rightfully so, especially when you wonder what the two know about each other’s styles that can play into the end result on Saturday night. From Guillard’s side though, there are no concerns about what Cerrone knows or doesn’t know about him.

“I can’t say we know each other’s game a hundred percent anymore because it’s been a year since I’ve been at Greg’s,” he said. “It’s the same thing that happened with Jon (Jones) and Rashad (Evans). Jon got better and Rashad didn’t respect that and he came up short. I’ve gotten a lot better since I’ve been here and I know in my mind that Donald’s gotten a lot better, so there are gonna be some similarities, but I don’t think we’re the same fighters. I think we’re both better than when we were training partners. And he’s a good friend, a best friend of mine, but it’s business. I want that belt just like he wants it. He had an opportunity to be a champion in a big organization with the WEC; I haven’t had that chance yet, so I feel like right now, in my life, it’s my time.”

It’s safe to say the fighting a friend thing isn’t an issue then?

“Not really,” said Guillard. “When I was growing up and fighting in my hometown, me and my blood cousin, my mom’s first cousin’s son, we actually fought each other. So I actually fought a family member before in a sanctioned fight. So fighting friends and stuff like that don’t bother me one bit.”

So what happened in his fight with Calvin Martin in November of 2002?

“It went to a decision,” said Guillard. “I kinda pulled punches a bit, I didn’t want to knock my cousin out, but I did win the fight.”

Well, if he’ll fight his cousin, fighting Cerrone should be a piece of cake for Guillard, who is guaranteed to have some classic stories to tell his kids and grandkids one day. He agrees, but with one addition that will make all the great stories - and that cake - even greater.

“I’m hoping that with the way things are going and with my life right now, when I tell my kids those stories one day, I hope I have that lightweight title in my possession, so it can be a fulfillment of how hard I worked all these years to get to where I’m at,” he said. “It’s kinda like putting the icing on the cake. I don’t want to give the kids no poundcake, I want them to have a cake with some butter frosting on it.”