Melvin Guillard - Back to Where It All Began

"I want to win this fight, get back on a winning streak, and hopefully
chase down that title that I’ve been chasing the last couple years." - Melvin Guillard 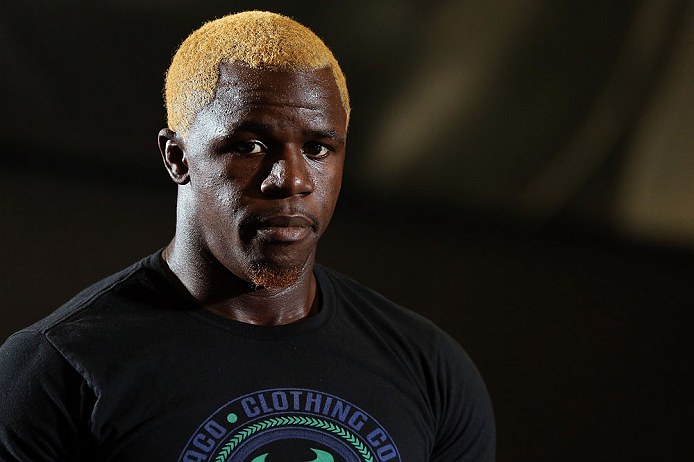 The UFC’s return to the Hard Rock in Las Vegas for The Ultimate Fighter 16 Finale, which takes place at The Joint Saturday night, isn’t just a homecoming for the organization, it’s also one for the young man who entered the MMA world’s consciousness in the same building over seven years ago. And as Melvin Guillard prepares to meet Jamie Varner on Saturday’s main card, he is understandably a bit sentimental.

“It’s gonna be like being on The Ultimate Fighter again,” said Guillard, who made his UFC debut with a second round TKO win over Marcus Davis at the Hard Rock in November of 2005. “It’s kinda like going back to where everything started, and for me that’s where all the magic happened. I wouldn’t be in the UFC if it wasn’t for me winning at the finale. A lot of the guys didn’t make it into the UFC, so for me, it’s like a homecoming. I get to go back to where I started, I get a fresh start, and see if I can give it another run.”

In 2005, it was clear that the New Orleans native and TUF 2 competitor had all the talent in the world to succeed in the UFC. What was a bit cloudier was whether he would keep it all together outside the Octagon in the process.

“Back then I was just wild, rambunctious, and I was just reckless,” he said. “I didn’t really care who I hurt, I didn’t care what people thought of me, but as you grow up, things change.”

They did, as evidenced by the fact that of the 20 fighters who competed on season two of TUF, only Guillard and former light heavyweight champion Rashad Evans remain on the UFC roster. And though Guillard’s well-publicized journey took him through surviving Hurricane Katrina, losing his father, a suspension for drugs, and some costly losses, he’s made it out the other side as not only one of the top lightweights in the game, but as a mature 29-year-old whose time spent not in the gym or with his wife is usually spent on the links.

But this amateur golfer hasn’t lost sight of his day job, and as he gets ready for Saturday’s bout with Varner, he’s doing so having lost three of his last four bouts, with his August knockout loss to friend and former teammate Donald Cerrone one of the hardest pills he’s ever had to swallow professionally.

“For me that was one of the toughest ones to get over because I had never been knocked out in competition, and being knocked out for the first time and the way it happened, it bothered me for a little bit,” admits Guillard. “But I got back up on the horse and had to just get back at it. I can’t let that one fight affect me. Coach Henri (Hooft), my Dutch coach, he had a great point; he said all the great Dutch kickboxers – Ernesto Hoost, Peter Aerts - all those guys were great champions but they all got knocked out. That’s part of fighting. You get there and you go to fight and it’s either you’re gonna knock him out or he’s gonna knock you out. You can’t beat yourself up over it; you gotta get back in there and go and try to knock the next guy out, so that’s kinda how I approach everything now.”

And though Guillard’s wrestling has improved over the years, allowing him to turn back the challenges of Brazilian jiu-jitsu black belts Gleison Tibau, Ronys Torres, and Fabricio Camoes, it’s that explosive knockout power and willingness to throw hard and throw often is what made “The Young Assassin” a fan favorite. He’s likely to find a willing dance partner in the resurgent former WEC champion Varner, and if you think he’s going to be gun-shy after his first knockout loss, think again.

“It (the Cerrone fight) messed with me a little bit mentally, but I’m over it now, I’m ready to fight, and I think Jamie Varner’s a tailor-made fight for me. I want to win this fight, get back on a winning streak, and hopefully chase down that title that I’ve been chasing the last couple years.”

Guillard (47-12-3, 1 NC) has been close, most notably when he ran off a five fight winning streak in 2010-11 that saw him defeat Jeremy Stephens and Evan Dunham and pick up three highlight-reel knockouts. But with back-to-back submission losses to Joe Lauzon and Jim Miller and the defeat at the hands of Cerrone sandwiching his lone win against Camoes, Guillard has had to reset, reload, and now begin the road back. Yet if he has an issue with that, he’s not showing it, as he believes that a comeback scenario for him is one that will keep his bank account flush while he stays busy taking on all comers.

“Hell yeah, I’m trying to be like Michael Johnson,” laughs Guillard, referring to his Blackzilians teammate, who is preparing for his fourth fight of 2012 at UFC 155. “Keep me busy. As much as I would love to have the championship belt, when you get the belt, guys only fight like twice a year, and then if something goes bad, you can’t go back to fighting guys from the reality shows because you’re a champion. Right now, I’m in a good situation because I can fight three, four times a year, maybe five, and I can fight guys coming off The Ultimate Fighter, and I’m just trying to take advantage of my opportunity to get as many fights in as possible and make as much money as possible at the same time.”

Seven years is a long time, especially in the fight game. So for Melvin Guillard to have made it this far, that’s an impressive feat. He’s not satisfied of course, but what top level athlete ever is? Yet when this young man returns to the place where everything began for him, he can safely be described as a success story, and that doesn’t just go for what’s happened in the Octagon, even if the only thing Guillard is thinking about this weekend is winning.

“I’m blessed to have the job that I have,” he said. “And that’s what makes me get up in the morning and say, hey, I gotta bust my ass in the gym so that I can still have this life, because if there’s no UFC, there’s no fighting for Melvin.”