Humble Beginnings And Adversity Have Shaped Lightweight Melquizael Costa For His UFC Debut And To Inspire Others.
By Thomas Gerbasi, on Twitter: @TGerbasi • Jan. 19, 2023

In the fight game, any edge, no matter how slight, could be the difference between winning and losing. So, if Thiago Moises wants to get the best of his opponent, Melquizael Costa, this weekend in Rio de Janeiro, he may want to take the newcomer’s cell phone.

“My dad is the person who calms me down,” said Costa of the man he calls his hero. “I call him after weigh-ins and we joke around, and he comes up with different crazy moves, too. Once I speak to my dad, my opponent is screwed.”

Those calls with his father may not sound like anything out of the ordinary, but for the 26-year-old, it’s not just a grounding chat, but a reminder that even though his dad wasn’t exactly thrilled about his son entering the MMA world, no one is more supportive these days.

“In the beginning, he didn’t support me because he thought fighters had to be strong, and I was just skinny,” Costa recalls. “But then we created a very strong bond and he knows how to give me strength and how to motivate me.”

Twenty-four fights and 19 wins later, Costa has proven that the skinny kid from Porto de Moz isn’t too bad at this prizefighting stuff. And though he’s making his UFC debut as a relative unknown against one of the lightweight division’s best, he is firm in his belief that he belongs, something over 12 years in the game will give you, especially after a rough start. 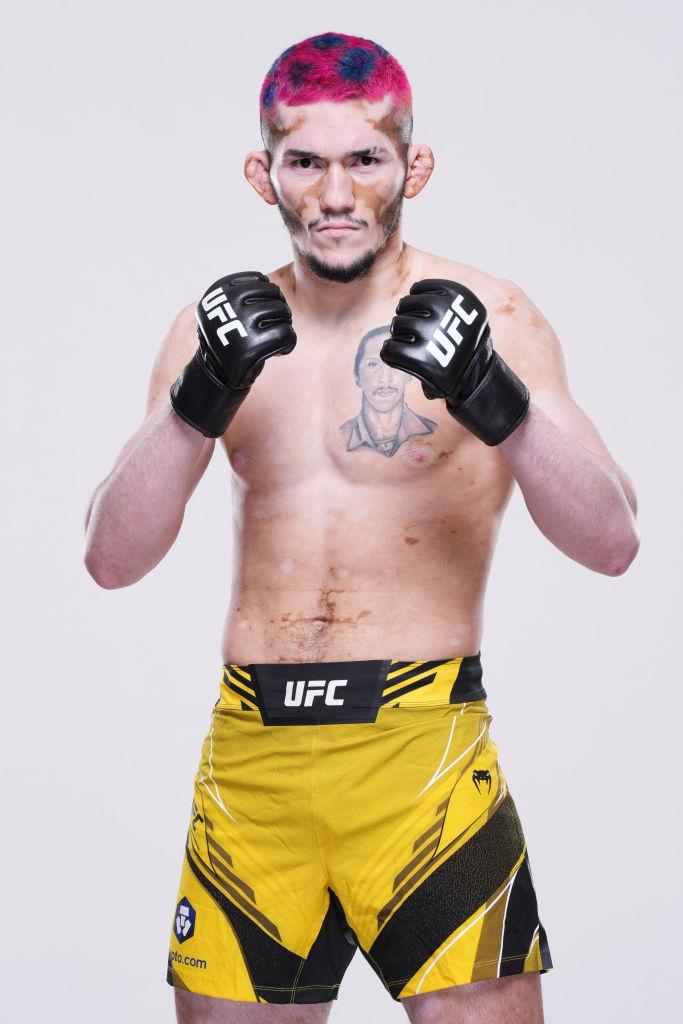 Melquizael Costa poses for a portrait during a UFC photo session on January 18, 2023 in Rio de Janeiro, Brazil. (Photo by Mike Roach/Zuffa LLC)

“I started training in 2010 when some friends invited me to a gym,” said Costa. “I put on all the gear to train some striking and got knocked out. Then another friend told me to come train jiu-jitsu, and I didn’t know what it was. The friend was injured and said he just needed one hand to submit me, which he did. I decided that I needed to train to beat that guy.”

That’s how it usually begins, but for Costa, it was more than that, as being able to fight and defend himself gave him a confidence he needed after dealing with plenty of abuse from the outside world due to the autoimmune disorder vitiligo that he dealt with since he was a child.

“I started training but was very shy because I had been through a lot of discrimination since I was a kid and that had messed up my mind,” he said. “I didn’t want to take my clothes off around people, or take pictures with others. At one point I was working in the countryside and didn’t even want to go back to the city; I was like an animal and avoided human interaction. Fighting helped me overcome all of those things, so I started training seriously and began enjoying it.”

It was more than learning left hooks and heel hooks for Costa, who fell in love with combat sports because on the mats, he was just like everybody else.

“When I was a kid, people would confuse vitiligo with leprosy,” said Costa. “But it wasn’t the kids discriminating; it was the parents who wouldn’t let the their kids interact with me, or they would pull them away. It was tough. Fighting was what made me start ignoring it. There was a time that it really affected me so I wanted to train harder because I wanted to beat up whoever would call me names. But then came a point when I noticed that people didn’t really care anymore. It was more in my own mind at that point. When I started competing more, people cared less about me having spots on my skin.”

Fighting saved Costa, but with the exception of his brother, his family wasn’t convinced this was a good thing, especially when he expressed the desire to make a living out of it one day, a prospect that didn’t seem too promising when trips to the gym usually saw Costa as the nail and not the hammer.

“I would get beat up a lot because I was training with pro MMA fighters,” he said. “My family didn’t want me to keep fighting; nobody liked it. My brother was the only one to support me and said he would help me, but I didn’t even know if that’s what I really wanted to do. I kept training, but my brother had an accident and passed away in 2013. That really affected me, but it also gave me a lot of strength to keep going.”

The pattern became clear from there - school, work, then training. Costa was relentless.

“I was always very focused on studying,” he said. “In high school, I was told that needed to choose between studying or fighting. I would go to school in the morning, and when school was over, I would grab my cart to sell popsicles on the streets. In the afternoons, I would go train at the gym and I kept that routine for two years. After finishing high school, I decided to focus on just one thing, so I focused on MMA.”

In 2014, the 17-year-old Costa made his pro debut with a three-round split decision win over Benjamin Junior Coelho Pantoja and raced out to an 8-0 record. A 4-4 stretch followed, but a run in which he won seven of his next eight was the one that earned him the short-notice call to the UFC. Included was a 2020 win over Anderson Ferreira that he won’t forget anytime soon.

“I was offered that fight 15 days before the fight,” Costa recalled. “He’s a knockout artist who had 13 knockouts in 14 wins. Five days before the fight, I fell and blew out my shoulder and couldn’t move it. My coach stretched it so I could move it on fight night, and I said, ‘Now I can knock him out.’ I knocked him out and shocked everyone. So my biggest accomplishment is shocking people.”

That’s not a bad accomplishment, but maybe the biggest one is inspiring people who may be going through the same struggles he did growing up.

“I like being in this position,” Costa said. “Maybe if I had someone to look up to when I was younger I wouldn’t have gone through the things that I did. For all those people who suffer with depression or any other kind of disease and are held back, I want to tell them that the world is beautiful. The people who make fun of me or have mean comments are really just unhappy with themselves; happy people don’t waste their time making fun of people and calling them names. I receive a lot of messages from people who have looked up to me, and I meet people at events who are just there to see me, who wouldn’t usually even be into MMA. It’s very satisfying to know that I can be an inspiration to those people.”

I’m guessing father and son will have plenty to talk about on Friday.

“This time, the call will be after my first UFC weigh-in and I believe he couldn’t be more proud,” Costa said. “And we’re all very happy to be able to represent my town of Porto de Moz. To hear Bruce Buffer announce my town will be amazing.”