After Two Years On The Sidelines, Brazilian On The Precipice Of UFC Win Streak
By Steve Latrell, on Twitter: @TheUFSteve • Dec. 17, 2021

Melissa Gatto’s UFC debut was at UFC 265 back in August 2021, but the elation of that evening is still completely fresh.

“I remember every detail because I spent so long waiting for that moment. I remember waiting, I was anxious. But I’ll remember all the details forever.”

It was anything but an easy path. Originally signed back in 2019 with the intention of taking her inaugural bow at UFC 237 in her home country of Brazil, one circumstance after another began working against her. A supplement-related USADA issue sidelined her for a year. Then a skin infection, visa issues and injury would delay other opportunities that followed. 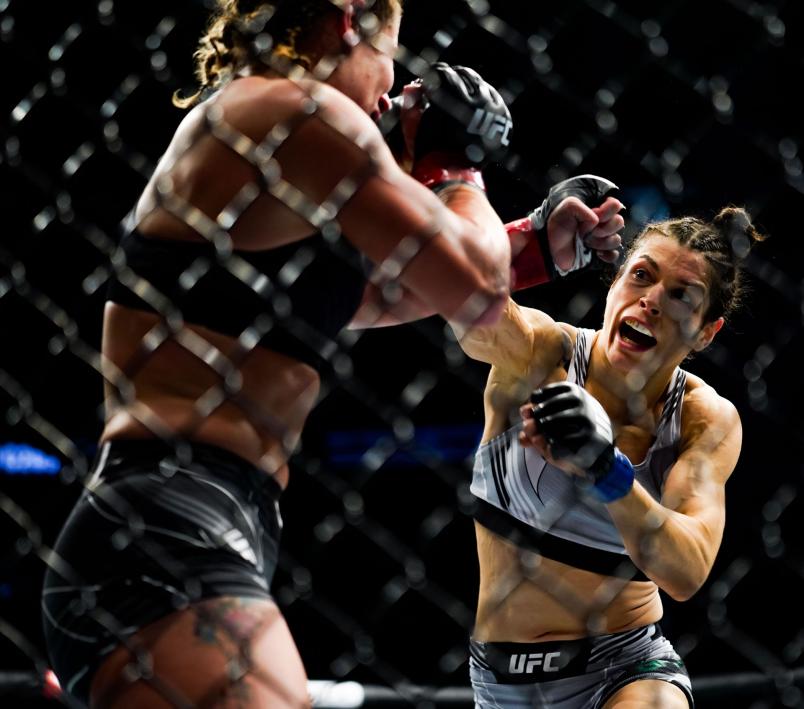 “I signed with the UFC and waited two years to do my first walkout, so I was very, very happy when I actually got to do it.”

The flyweight made the most of it, outperforming a game Victoria Leonardo with her trademark high-level jiu-jitsu for the two rounds that the fight lasted. Between the second and third rounds, the doctor overheard Leonardo inform her corner that her arm “was not working.” Leonardo insisted whatever was wrong, she would happily fight through it. Upon inspection, however, it was determined that the arm was fractured and the fight was ruled a TKO on the doctor’s stoppage.

“I wish I had fought that third round. I was a little frustrated that I couldn’t,” she admits. Like her opponent, she wanted to continue in order to remove any doubt. But nonetheless, the relief of scoring that first UFC win resulted in pure joy.

“It felt amazing; I was so happy.”

It was the culmination of a veritable lifetime in the gym. Inspired by the likes of Bruce Lee and Jackie Chan as a child, she wanted a taste of the thrilling sequences she saw on the silver screen. Her first discipline was Kung Fu.

“I started training because of my older brother, I used to watch him. And I really like fighting,” she laughs. “I'm a BJJ purple belt with several titles in BJJ competitions in the south of Brazil.” 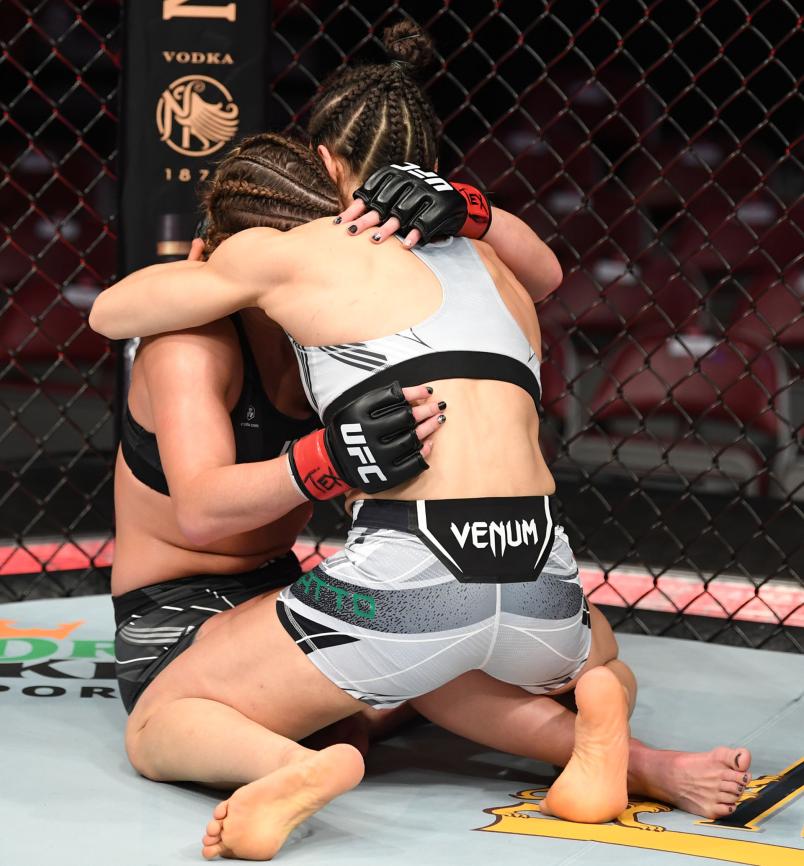 Victoria Leonardo reacts after a doctor stoppage due to her broken arm against Melissa Gatto of Brazil in their women's flyweight bout during the UFC 265 event at Toyota Center on August 07, 2021 in Houston, Texas. (Photo by Josh Hedges/Zuffa LLC)

Consoling Leonardo when their fight is called as a TKO doctor's stoppage, August 07, 2021 in Houston, Texas. (Photo by Josh Hedges/Zuffa LLC)

She parlayed her natural talent on the mats into MMA, where she started competing professionally in 2016. Her last bout before signing to the UFC was a first-round Kimura submission of Karol Rosa, a fighter who has also since signed to the UFC and gone undefeated at bantamweight ever since.

MORE FIGHT NIGHT: There Is Only One Derrick Lewis | Chris Daukaus Ready To Lay Down The Law | It's 'Do Or Die' For Charles Jourdain | Fighters On The Rise | Diego Ferreira Welcomes The Pressure | Fighting Enhances The Bond Between Chris And Kyle Daukaus | Belal Muhammad's Surge To Stardom

After making that long-awaited debut in a sold-out Toyota Center in Houston, Gatto is the rare fighter who is looking forward to fighting in the cozy confines of the UFC APEX in Las Vegas in front of just a few dozen fans.

“Fighting with a crowd is always nerve-wracking. You get anxious. Here you won’t have that, so I think I will be more calm. I won’t have that pressure of a debut in the UFC.”

She will have the pressure of perennially tough Sijara Eubanks, however. Does drawing the TUF standout in just her second UFC bout signal to Gatto that the UFC brass feels assured in her skill set?

“I believe so,” she says. “Especially because [Eubanks] had previously been in talks to fight for the belt. Saturday I’m going to put up a good fight. She has a very good name. It shows the UFC has confidence in my work.”

“Sijara is very experienced. She has a lot of skills. But my strategy is to always be one step ahead of her and that’s what I’m going to do on Saturday.”

The UFC women’s flyweight division historically has been one where fighters can make waves in pretty short order if they can put together a few wins in a row. But even after two years on the sidelines, Gatto is still only 25. She has carefully constructed her undefeated record and isn’t in any particular hurry to rush her dreams.

“I’d like to do some more fights before I get into the Top 15,” she says. “I hope in 2022 I can get at least three fights and see what the universe is going to throw my way.”

One thing she hopes the universe throws her way is an easing of the pandemic that would allow the UFC to stage an event back home, where she was supposed to begin this journey.

“Fighting in front of the Brazilian crowd would be amazing. My debut was supposed to be in Brazil. I hope the UFC gets back to Brazil soon so I can actually realize that dream.”