Megan Anderson Is Ready For The Next Chapter

Thirty is the age when most sit down and have that talk with themselves about where they’re at in life and what the next steps look like.

On February 11, UFC featherweight contender Megan Anderson turned 30, but she didn’t have that talk. That happened last year.

“I actually did that for my 29th birthday,” she laughed. “Exactly a year ago, I was turning 29 and I was like, 'Oh my God, what am I doing with my life?' All of the expectations I put on myself for what I should have at 30, I didn't have. So I was stressing about it, then the Rochester fight happened and I was like, 'Well, my career's gone to s**t.' So not only am I not meeting my expectations in my personal life, I'm not meeting them in my career. I'm going to be 30 and everything's going to be s**t.”

It wasn’t a place Anderson wanted to be, and when a May 2019 fight with Felicia Spencer dropped her to 1-2 in the Octagon, the former Invicta FC champion could be excused for thinking things were heading in the wrong direction. In past years, that could have sent the Australia native spiraling. But in 2019, this was a different Megan Anderson, and soon things started to get on the track she needed to be on.

“The last six to eight months, so much has changed in my life and I'm in such a different place that I turned 30 and I have this weird sense that I have so much more to happen and I feel like I'm so close to achieving a lot of different goals and a lot of milestones and I've just got to be patient and just put in the time and my best years are still to come,” she said. “I'm just gonna do my own thing, live my life, do what makes me happy, cut out negativity and continue self-improvement and try to be a good person and good things will happen.”

The most visible good thing took place last October, as she returned to her home country, fought in front of over 57,000 people and submitted Zarah Fairn in less than four minutes. It was a reminder of just how good Anderson is and that when everything is clicking, she can beat anyone at 145 pounds.

This Saturday, she will attempt to prove that once again when she enters the Octagon for the fifth time against unbeaten newcomer Norma Dumont. The 29-year-old is a bit of a mystery at this point, having won all four of her pro bouts at home in Brazil, but she does have a black belt in Sanda and a purple belt in jiu-jitsu, and if you ask what she thinks of the matchup, she has all the confidence in the world that she will win. But Anderson is riding a wave at the moment, and after surviving the storms of the past, she’s just as confident of leaving Norfolk with her hand raised.

“There's that saying, 'You're a hundred percent successful through all of your worst days,' and that's so true for me,” she said. “It's taken a lot for me to get here. A lot of learning, a lot of patience, a lot of self-growth and self-reflection and understanding who I am as a person and who I want to be. I'm focusing on that and less focus on everybody else or what other people are doing. I can't control that, and I think I'm at a place where no matter what happens, I'm gonna be okay. I'm a fighter, I'm a survivor and I succeed in everything I put my mind to.”

The next task at hand isn’t just winning this weekend, but making a statement about the featherweight division, a weight class that will also see Spencer and Fairn taking to the Octagon on the UFC Fight Night card. It’s an important night for the ladies of the 145-pound weight class currently ruled by Amanda Nunes, but Anderson is of the opinion that at this point, the most important thing she can do is take care of her own performance and let the division take care of itself.

“I’m at a point where I'm just gonna do me,” she said. “I'm going to come to fight, I'm going to try to put on amazing performances and I'm going to try and get my hand raised every time. And whatever they want to do (with the division), they're gonna do. I have zero control over that. I can't control that. All I can control is me. I'm gonna put my head down and work.”

It’s an attitude Anderson shares with her coach, James Krause. Yes, the same James Krause who fights in the UFC’s welterweight division but took a middleweight fight against Trevin Giles on a day’s notice earlier this month. That’s called practicing what you preach. But beyond what Krause brings to the Octagon or training room, Anderson appreciates that her coach is always thinking big picture and acting accordingly.

“I think the one benefit of being able to not only be coached by James but to have him as a friend and brother is that whether it be fighting or outside of fighting, he's never asked of us anything that he is not willing to do himself or has done himself in similar situations,” she said. “And I think that one great thing about James is he's real. He isn't delusional and he doesn't cut corners and he is the poster boy for hard work and consistency and being patient. It has been incredible for me to watch, from when I first came here to now, just how people are finally starting to see his value, and not only the value he brings as a competitor, but what he brings as a coach, what he brings as a businessman, what he brings as a family man. I couldn't be happier to finally see him getting the recognition that he deserves.”

Anderson is starting to get that recognition in her own right. She had it when she was in Invicta FC, then after some stumbles in the UFC, it’s coming right back. And right on time for a fighter who may be hitting her prime. Yet while the immediate goals are to keep getting fights, keep winning and ultimately challenge for a UFC belt, Anderson, like Krause, is thinking of life after she hangs up the gloves.

“I just turned 30 and I still have good years left, but I also am realistic,” she said. “I cannot fight forever and I don't want to be fighting forever. I'm not unrealistic in the mindset that my body can handle fighting forever. The stress and toll that your body goes through to be able to fight at the highest level, you cannot be fighting forever. So I'm trying to get into a couple different things, broaden my horizons and setting myself up for when that time comes. I think that also comes with age, experience and life skills.” 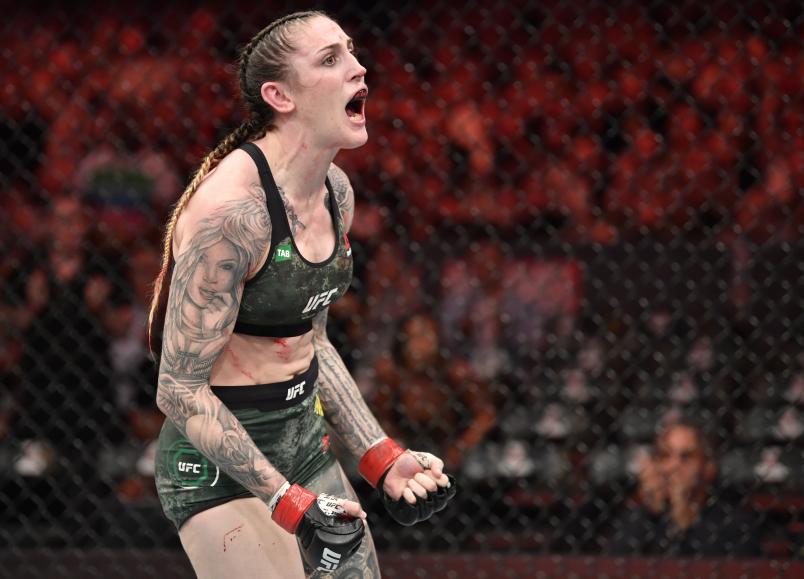 MELBOURNE, AUSTRALIA - OCTOBER 06: Megan Anderson of Australia celebrates after her submission win over Zarah Fairn in their featherweight fight during the UFC 243 event at Marvel Stadium on October 06, 2019 in Melbourne, Australia. (Photo by Jeff Bottari/Zuffa LLC/Zuffa LLC via Getty Images)

MELBOURNE, AUSTRALIA - OCTOBER 06: Megan Anderson of Australia celebrates after her submission win over Zarah Fairn in their featherweight fight during the UFC 243 event at Marvel Stadium on October 06, 2019 in Melbourne, Australia. (Photo by Jeff Bottari

She earned all three the hard way. Anderson recalls coming to Kansas City with a bag of clothes, a bag of training gear and a thousand dollars to her name. It wasn’t easy then and it isn’t easy now, but nothing in life worth chasing is easy. And she’s embracing the journey that led her to being a 30-year-old UFC fighter who represents her home down under and the home she adopted.

“I would honestly say that I've been blessed with the ability to live the American Dream,” she said. “It has not been easy. I have lived out of a car, I have lived with housemates and in a fighter house and I've sacrificed a lot and I've lost and I've won and it has been such a rollercoaster. It has not been easy and it will continue to be a rollercoaster because I'm not done yet. But I feel like I've been able to show people that through persistence and hard work that it is achievable. It is not easy and it is not quick and it will not happen overnight, but by slow and steady hard work and dedication, you can achieve whatever it is you set your mind to as long as you never settle.”

“It's been amazing to see my own transformation over the last four and a half years and to now just grow as a person, but to really become a Kansas City resident and to represent Kansas City, and I hope that I can represent both my home country and Kansas City because most of my success as a professional athlete has been while I've been here. I've been adopted by this beautiful city and even though it gets cold and I hate it (Laughs), it's been an incredible journey and it will continue to be an incredible journey. I'm excited for the next chapter and that starts February 29th.”