"I think we’re on opposite ends of the spectrum on how we handle ourselves, and I dislike Roy." Shane Carwin on Roy Nelson 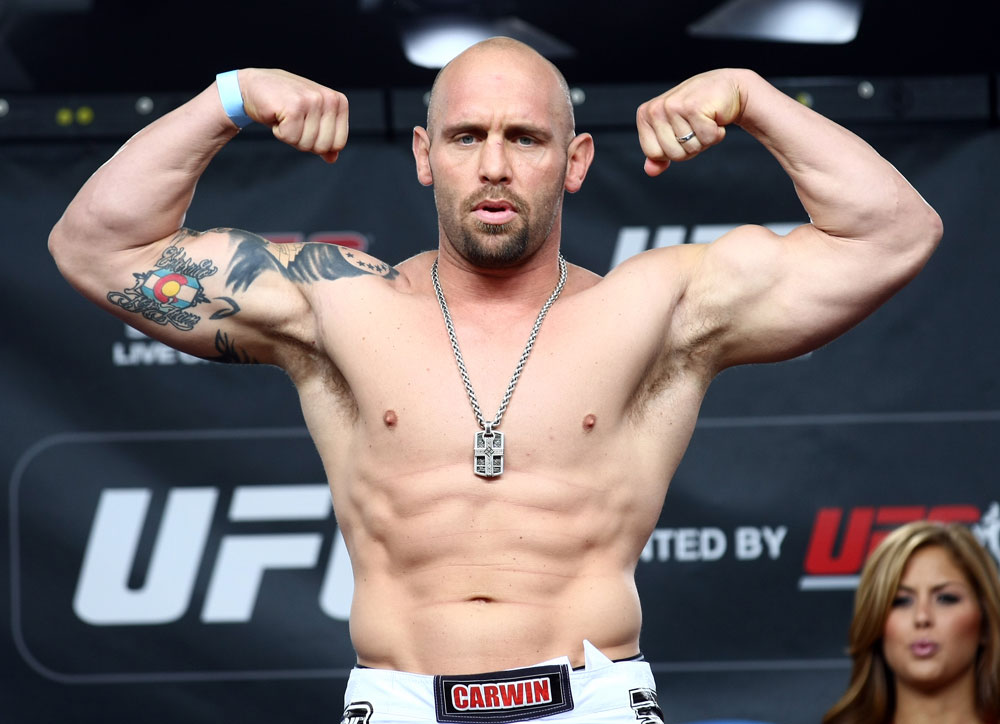 The Colorado KO King is back. Maybe not in the way you would have initially expected, but Shane Carwin’s return to active duty as a coach on season 16 of The Ultimate Fighter (which premieres on FX this Friday night at 9pm) after being sidelined by injury for over a year is a welcome one, and no one is more amped up than he is.

“I’m a competitor at heart, so these surgeries and all that have definitely taken a little bit of a toll, so I’m definitely excited to get back and hopefully all the problems with my spine are taken care of,” said Carwin, a former interim UFC heavyweight champion. “I’m working with a great strength and conditioning coach in Loren Landow, and he’s helping me keep my core strong, my body mechanics right and being posteriorly correct and doing all the right things to try to keep that back healthy.”

And as he runs his team of hopefuls through the ringer with the help of assistant coaches ranging from Nate Marquardt, Duane Ludwig, and Trevor Wittman to Pat Barry, Leister Bowling, and Landow, to prepare them to compete for a life-altering contract with the UFC, he also has a little pot of gold waiting for him at the end of the rainbow in the form of a fight at the season finale on December 15th against opposing TUF 16 coach Roy Nelson, who won’t exactly be on Carwin’s Christmas card list this year.

“There’s no hiding it – we have a strong dislike for each other,” said Carwin. “I think we’re on opposite ends of the spectrum on how we handle ourselves, and I dislike Roy. (Pauses) I just don’t like the guy and I’ve got nothing to say to him. He tries to paint himself as this average guy, and he’s not. He’s never had a normal job. I grew up blue collar, and I work extremely hard just to live.”

Which brings up an interesting point heading into this season: Carwin’s dual life as a full-time professional fighter and a full-time engineer in his native Colorado has been well-documented. How was he able to escape to Las Vegas for six weeks of taping?

“I had to go before the board and talk to them and explain to them what was going on,” said Carwin, “and I’m out here working on a remote desktop. What this has taught me is just being out here and being here with my coaches and just training full-time is that I am missing some of the aspects, so there are some things I have to reevaluate myself as a fighter. I think I miss the recoup time and the rest time that a lot of these other fighters get and I think that might be contributing to my injuries.”

But as famed boxing trainer Cus D’Amato once said “people who are born round don’t die square,” and you get the impression that Carwin is one of those people who will never sit still, who always needs something stimulating him physically or intellectually.

“There’s a plan,” laughs the 37-year old. “We all have to have goals and where we see ourselves in the future, and that’s how we succeed. You just can’t go living day to day with no plan in your life. So when I reach the age about 45, I plan on picking up fly-fishing and other sports, and I’d like to try and make it into some competitive golf tournaments when I get older too. I’ve found a love for the golf game, and just picking that up and working with a guy that was on the tour back in the day, Mark Cook, so there are lots of opportunities to be competitive at other things when I get older in life.”

All retirement plans aside though, Carwin still has plenty of fight left in him. 4-2 in the UFC with knockout wins over Frank Mir and Gabriel Gonzaga, he was thisclose to winning the undisputed heavyweight crown against Brock Lesnar in July of 2010 before gassing out and getting submitted in the second round. A layoff of nearly a year followed due to injury, and though he lost to soon-to-be champion Junior dos Santos in June of last year, he courageously went the distance with “Cigano” before losing a unanimous decision. And to think, he did it all while working full-time and raising a family. It’s a key lesson that he will be able to impart to his team on TUF, as many young prospects, if not all of them, have to juggle day jobs with their fighting careers until they make the big time.

“Definitely,” said Carwin. “And they can see that it’s possible (working and fighting), so it’s not a viable excuse for them to use. In anything that’s life that, you have to tell them that you’ve got to prioritize what you want in life. If work provides for your family or just you and gives you the basic needs in life, and fighting is what you dream of doing, there’s no reason you can’t do both.”

Carwin’s done it, and at the highest level of the game; so much so that he was brought in to coach the next generation of MMA stars on TUF. Yet despite his graciousness with the media over the years and his ease when the spotlight is on him, having cameras following him for six weeks did take some getting used to.

“It was difficult at first, but you get used to it,” he said. “You’re right, I’m not a guy that seeks out fame. I love the sport and I love to work hard and I’m passionate about these kids and being able to coach them and hopefully teach them some professionalism in the sport and in life as well.”

It all starts Friday night.

Oh yeah, there’s also that little Carwin vs. Nelson thing going on too.

“We’re polar opposites and that’s what you’re gonna see,” said Carwin. “You’re gonna see someone who takes the sport very seriously and professionally, and another guy that’s an ass clown.”