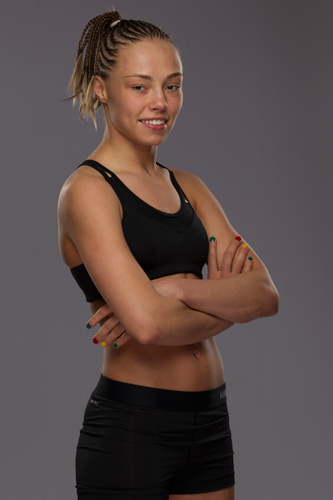 If you’re one of the over 305,000 people who have seen Rose Namajunas’ zombie take on “The Harlem Shake” on YouTube, you’ll probably assume that “Thug” Rose is just like any other 21-year-old.

She’s active on social media, she posts funny videos with her boyfriend (former UFC heavyweight Pat Barry), and she is grabbing life by the horns and enjoying every minute she can of it.

Where the Minnesotan differs from the masses is easy to see. She’s a professional prizefighter about to get locked away from the world for six weeks in a quest to become the UFC’s first strawweight champion.

Few did, and that goes for any of the 115-pound fighters that have been chosen to compete on season 20 of The Ultimate Fighter. And that’s no reflection of the talent each of these ladies possess, but remember, just a few years ago, UFC President Dana White said that women wouldn’t be competing in the Octagon. Since then, Ronda Rousey captivated the world, with her and her peers taking over in 2013 and becoming some of the most popular fighters in the UFC. And now there will be 16 women competing for a title in a new UFC weight class, and one of them is a karate and taekwondo black belt who seemingly came out of nowhere over the last year to take her place among the elite.

“It was hard to see the future in the sport,” she said of her beginnings. “But there was something inside me that knew if I just kept doing this and had fun with it, eventually doors would open.”

Those doors are wide open now, with a 4-0 amateur and 2-1 pro record earning Namajunas her spot on TUF. Well, probably that and a little something like a 12 second flying armbar submission of Kathina Catron in 2013 that won’t ever be removed off her personal highlight reel. Almost as memorable as the win was her post-fight celebration, a pure, unedited sequence of joy that reminded you why we love watching this sport. Add in her interaction with the fans and her video clips, and Namajunas has that “it” factor that’s perfect for reality television, but as Barry has warned her, don’t get taken in by the television part of her reality.

“The main thing he (Barry) told me was just to be myself,” she said. “Don’t get caught up in the fact that you’re on a reality TV show or that you’re in the UFC. It’s a job. And be yourself. Don’t try to be a certain character. Don’t try to be the spunky one or the flirtatious one or the mean one – just be you, and everything else should be successful.”

Everything else is the most important part, and that’s fighting and winning. Namajunas already has experience against two of her fellow competitors, submitting Emily Kagan and losing a decision to Tecia Torres, but as she points out, this neither puts her at an advantage or disadvantage once the show starts.

“Obviously it gives a certain familiarity and comfort level, but at the same time you don’t ever want to be comfortable because people evolve,” she said. “And if I know what I’m capable of and what I’m able to do, then that means that it’s possible for other people to achieve that level. And if there’s a possibility of that, then I have to prepare for the meanest, baddest, toughest chick around.”

There are plenty of ladies already on the TUF 20 roster that fit that description, and Namajunas is one of them. So what’s her take on the other seven fighters already selected for the show?

“There are strikers, grapplers, and wrestlers, but there are ones in between there that are good at everything,” she said. “There are not many girls going into the house that are just one-dimensional, so it’s going to be super exciting. Obviously the game plan changes from opponent to opponent, but in actuality, it doesn’t really matter what the other girls bring to the table because what I’m bringing to the table is that I’m going to be nothing that anybody has ever seen before.”

She’s not bragging either, as she has gone to great lengths to evolve her game and get different looks in the gym. So while she’s back at the Grudge Training Center in Colorado preparing for TUF, the previous months have seen her on the road and at different gyms. She believes this will help her adjust better than her peers, who may be without their regular teams for the first time on the show. Add in that one of her coaches on the show could be a former teammate in UFC lightweight champion Anthony Pettis, and Namajunas’ edge might be a sizable one going in.

“It’s definitely a challenge, but I think that it might be more challenging for the other girls than for me,” she said. “For the past few months, I’ve been kind of doing my own thing. I finally came back to Denver and my original coach, but I’ve been traveling all around and training at other places, and kind of coaching myself. That’s not ideal and I’m not centering my whole training camp on that, but along with the whole experiment of turning off my cell phone, I’m also preparing for being by myself and being alone. At the same time, there’s also a lot of familiar people and familiar former teammates. Obviously Anthony Pettis is a former teammate of mine, but it doesn’t guarantee that I’m going to end up on his team anyway. Either way, I’m a big fan of Gilbert (Melendez)’s too, so I’m really not worried about that too much.”

Ah, the joys of being 21. But as stated earlier, Namajunas is not your typical 21-year-old, something that will be evident once TUF starts. Sure, she likes to have her fun, but she also knows when to get serious and put the gloves on. And with all the attention she’s received since turning pro, she’s handled it like a veteran. How?

“That’s a very good question,” she laughs. “I’m a bit crazy, I guess. It definitely makes me go crazy sometimes, but I just keep a cool head and think about all the things that I’ve been through in my life, and even though I’m really young, I’ve had a lot of life experiences, so this prepared me for rolling with the punches – literally. (Laughs) This has come with some challenges, and it’s just a trial and error process. I get scared all the time, like ‘oh my God, this is a lot of crap coming at me at such a young age,’ but I’m just having fun with it and enjoying the ride and I’m excited for what’s about to come because it’s about to get real crazy.”