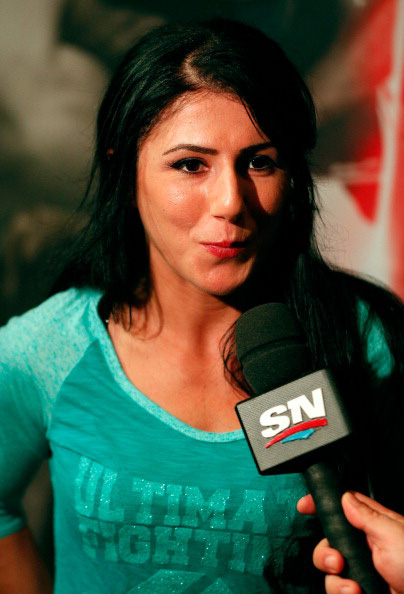 Allanna Jones may never make it to the UFC, but she will always have a place in the heart and mind of The Ultimate Fighter 20’s Randa Markos.

“If she didn’t take a fight with me, I don’t know where I would be right now,” Markos said. “I had two years of waiting and watching my life pass by. I could have had kids and all this stuff, but thank God Allanna Jones took that fight. I still, to this day, thank her for taking that fight because it’s turned my life around completely.”

The year was 2012. Born in Iraq but raised in Ontario, Canada, Markos’ ambition after years on the mats as a wrestler and jiu-jitsu player was to become a pro mixed martial artist. Four fights on the amateur circuit during 2009-10 were a good start, and after going 3-1, she was ready to test the pro waters. The only problem was that she couldn’t find anyone to fight her. To clarify, she could find people who said they would fight her, but wouldn’t show up to complete the deal.

“It was extremely difficult for me,” she recalls. “I had a few (amateur) fights and then there were no fights for two years. People think I took time off, but I was training for a fight all the time and they just kept falling through. There were, I think, 10 to 14 fights in two years. It was really stressful and I was at the point where I wasn’t going to do it anymore.”

Enter Ms. Jones, who traveled to Auburn Hills, Michigan to face Markos on November 17, 2012. Markos won via third-round submission, and all of a sudden, she had a career, one no one would have picked for her back in the days when she grew up as a Canadian girl still under the customs of the Iraqi culture.

“I came here at three, but I was raised as a Chaldean, a Middle Eastern in Canada, where the wife sits home and cooks and cleans and gets treated like s**t and you’re not allowed to do what you want and you can’t say what you want,” Markos recalls. “You can’t even watch what you want.”

By high school though, she found something she wanted in the form of wrestling, and she wasn’t about to let it go, even though her family had other ideas once she told them about her new love.

“I didn’t do it to prove to anybody what I could do and I didn’t do it because they told me not to,” she said. “I just did it because I loved it. And when I came to them and said ‘hey, I joined up for wrestling,’ they pulled me out of practice by my ear and said ‘you’re never doing this again, this is embarrassing.’ So then I just continued telling them I did volleyball because that was a girly sport to them. (Laughs) If you want to do what you want to do, you just have to keep it to yourself sometimes.”

So she did, and she got good. That didn’t help things at home, but by that point, the die was cast.

“I loved it so much that I just ignored everything else around me and I just continued doing it,” Markos said. “I had to lie a few times, but the way I see it is, if they don’t have a good enough reason for me not to do something, then I’m going to do it. For them to tell me ‘you’re a girl’ and that’s why you shouldn’t do it, that’s not a good enough excuse.”

It’s an inspiring tale for young girls and women dealing with the same antiquated “values” in their own families. And though Markos wasn’t doing it to make a stand, in her way she did. That tenacity has served her well in the fight game, and it helped her during those dark days when she wanted to compete but couldn’t find anyone to compete against. So what did keep her from quitting?

“It’s just the love of the sport,” the 29-year-old said. “I grew up in wrestling, and jiu-jitsu reminded me so much of wrestling, and wrestling is what saved me in my life. It was my second family. My teammates were like brothers to me. And when I found jiu-jitsu I felt that feeling again. And being able to pursue my dream of being good at something, I just can’t let it go.”

Following the win over Jones, Markos won two more bouts before losing a three-round decision to future TUF 20 castmate Justine Kish in January of this year. The loss devastated Markos, who bounced back with a win over Lynnell House two months later but still believes that people have judged her worth in the fight game by that lone pro loss.

“I lost my fight with Justine and the first two rounds I got beat up pretty bad and then I came back in the third round,” she recalls. “I felt like everyone thought that was how I fight. That’s not how I fight. I got caught with an elbow to the temple and it completely threw my game off, and everywhere I’d go, they’d only recognize me from that fight and not my other fights. So I really wanted to prove to the world that I’m just as good as anybody else out there.”

And what better way to do that than by competing on The Ultimate Fighter 20? Admitting that getting on the show “came as a surprise” because “I really didn’t think people knew anything about me,” Markos now has the chance to not just prove that she belongs with the 115-pound elite, but that she knew what she was doing all along.

At least she’s convinced one fan.

“My mom, finally, after so many years, she came up to me and told me that she’s proud of me,” Markos beamed. “That was the most amazing feeling in the world. I love my mother and I really look up to her. She’s the strongest person I ever met and for her to say she was proud of me, that was the best thing that could ever come out of this.”