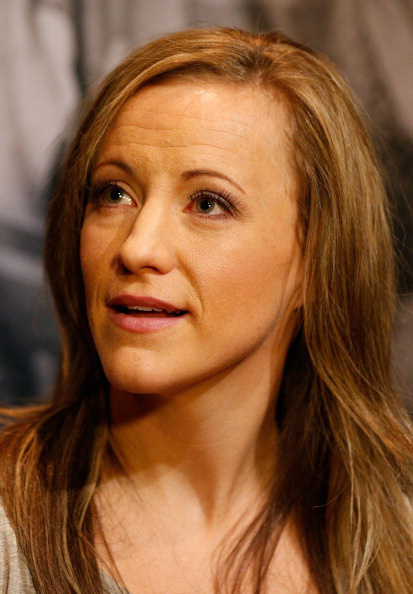 The Ultimate Fighter 20’s Lisa Ellis has heard the word “no” before. It’s just not something she pays much attention to when it comes to her athletic pursuits, and that feisty determination has been pushing her onward and upward since she was a child who wanted to follow her brother on to the wrestling mat back in Washington.

“Girls don’t wrestle,” Ellis’ father told her, but she had a plan anyway.

“I would go to practice and watch and I just loved it,” she said. “I did that for four years.”

That’s a lot of watching, but by the seventh grade, she got the green light to hit the mats, and she never looked back, going on to wrestle in high school and in a year of college as well. But after she left school, she wanted to lose some weight. A friend suggested MMA, and while she initially looked at her buddy and thought “If she can do it, I can do it,” Ellis quickly found out that it wasn’t as easy as it looked.

“When I first started, she would triangle choke and take my back constantly and I was like ‘what the hell’s going on?’” Ellis laughs. “Then I finally got into the swing of things and was understanding what was going on.”

So why not fight? And that’s just what Ellis did, turning pro in 2004 and losing her debut in 49 seconds to Mandy Stewart. That didn’t stop her, even though the sport – not just women’s MMA but MMA in general – looked a lot different than it does today.

“I remember going and being in small arenas, girls not making weight ever,” she said. “Fights would fall through and then they’d find somebody else that’s much bigger, and it’s like ‘oh well, yeah, I’ll take it.’ There were limited resources and you’d fight whoever whenever wherever if you could get that opportunity.”

Needless to say, in those early days, with the UFC was struggling and the Ultimate Fighter explosion of 2005 still up the road, you had to wonder what the end game was for a fighter like Ellis. There was no significant money, no exposure, and MMA was still seen as an outlaw sport back then. So what was the goal?

“Win,” she laughs. “That was about it. You didn’t really look at it being much more than a fun thing to do.”

Nearly eight years after that first fight, Lisa Ellis is 31, a mother, and the co-owner of a gym – United Training Center – that she actually lives in the back of with her husband, Eddy. She’s also the sole owner of a 15-8 pro record, and starting tonight, she will be in living rooms across the nation as a member of the all-strawweight TUF 20 cast.

“It’s been incredible to watch this sport blossom,” Ellis said. “It’s been really neat, and being part of it has been extraordinary, so I feel really lucky, and it’s a big gift to me.”

There are no gifts in this sport, only rewards that are earned, and Ellis has earned her spot here, where she is a few wins away from competing for the UFC’s first strawweight title. It’s an opportunity few could refuse, and even though she gave birth to her daughter Elenor in 2013, she wasn’t told “no” this time – not that it would matter. Instead, she got some good advice from Eddy, a fellow fighter who you may remember as a competitor on TUF 16.

“He just said ‘you need to go do it,’” Ellis recalls. “‘Don’t put too much stress on yourself, go have fun, and take advantage of this opportunity.’ That was comforting to hear.”

And now an old-school warrior gets to slug it out with the new breed.

“TUF 20 has a diverse group of girls, and we all have our ups and our downs and struggles, but it was definitely a unique cast,” Ellis said. “Some girls I’d love to continue to talk with and train with, and others I would love to never see again, except for in the cage. (Laughs) But it was a very unique experience and I’m very blessed to be a part of this exciting time.”