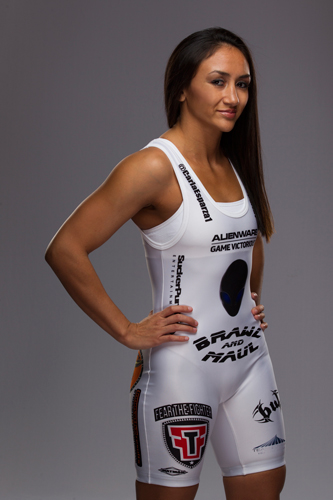 With the start of filming for season 20 of The Ultimate Fighter looming, there is probably no other competitor on the 16-woman cast with more pressure on her shoulders than Carla Esparza.

As Invicta’s most recent strawweight champion, the Californian isn’t just expected by fans to do well in the tournament; she’s expected to win. And considering that she’s the fighter many believe is the gold standard at 115 pounds, beating her is a pretty significant milestone for any of her peers, which puts a bright, shiny target on her back.

All of the above? She knows it.

Wanting it is half the battle. The next 20 percent is talent, and the other 30 is hard work. And the 26-year-old has never shied away from hard work, either on the wrestling mats in high school and college, and definitely not in the Team Oyama gym in Irvine, California, where renowned coach Colin Oyama is known for his brand of tough love during training camp. Then again, there are some things that you either have or you don’t, with no amount of coaching able to bring them out of you.

“Oyama has definitely honed my skills and showed me so much,” said Esparza. “I’ve been with him from the beginning, and I credit everything I’ve done to this point to him, but I think there are some things that are just inside you that you can’t teach, and my heart, my aggression, that’s who I am.”

A pro since 2010, Esparza won five of her first seven bouts, losing only to Megumi Fujii and Jessica Aguilar. The split decision defeat to Aguilar in June of 2011 particularly stuck with her, only because it changed her ongoing approach to the fight game.

“Having a loss shakes you up a bit,” she said. “I went into that fight with Aguilar knowing that it was going to be hard. We went after it, it was a split decision, and I’ve had so many people tell me that they think I won that fight, but it is what it is. I stood up that fight and we struck the whole time pretty much. I respected her ground game, but after that fight I had confidence in myself and told myself ‘you’re gonna run your game and nobody’s gonna stop you. You’re not gonna let anybody take you outside of your game. You’re gonna do what you gotta do to win,’ and I had more confidence in myself. I don’t want to go to decisions anymore; I want to finish the fight.”

She took those words to heart, winning four straight since the defeat, with the only fighters going the distance being TUF 20 castmates Felice Herrig and Bec Rawlings. And with six of her overall nine wins coming by way of KO or submission, Esparza is a fighter who takes finishing seriously.

“I have to be careful, and I always know that there’s danger in any position, but I would definitely say that I have that kill mentality,” she said. “I’m very aggressive and I want to be all over you. I don’t want to give somebody a second to breathe and I think that leads to finishes. A lot of women aren’t used to that physicality, so I definitely bring something different to the table than a lot of the other girls in the division.”

That’s usually enough for Esparza to get the win, but this summer she will be tossed in the reality TV fishbowl where she has to both fight and deal with 15 other contenders seeking the same end goal – the first ever UFC strawweight championship. That’s daunting for anyone.

“Mentally, it’s hard,” Esparza admits. “Some of the girls have done reality stuff before but I’ve never done anything like this to the point where I haven’t had contact with the outside world and where it’s been one hundred percent training and living with these other women. So it’s going to be a new experience and I don’t think there’s really a way to truly prepare mentally for that.”

Another potential wrench in the works is that one of those 15 other competitors is an old foe in Herrig that also happens to be Esparza’s best friend.

“Of course it will be difficult,” she said. “I could sit here and say ‘it’s not a big deal, whatever, we’re gonna get in there and do what we have to do,’ but it’s not so simple. That’s trying to hurt someone that’s your best friend, that you talk to on the phone every day. We’ve sparred together and trained together, but having that ‘go for the kill’ mentality toward your friend is hard, and it would be very hard (fighting Herrig). I don’t want to fight her, and hopefully that fight doesn’t come up, but if it does, obviously we have to suck it up. There’s a huge opportunity in winning that fight or any fight in the house, so taking that opportunity from someone who’s your best friend and like your sister, it’s hard.”

Needless to say, it’s going to be an interesting six weeks in Las Vegas for Carla Esparza.

“It’s starting to sink in,” she said of being on The Ultimate Fighter 20. “I don’t think it’s going to super-sink in until I’m in that cage, and though the house is definitely gonna be a trip, as soon as that cage door closes, it will be ‘oh my God, it’s real.’”