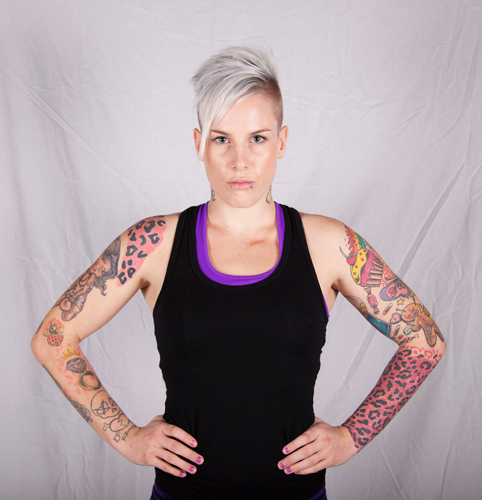 You can’t miss Bec Rawlings in a crowd. Whether it’s her hair, the tattoos, or that infectious laugh, the Ultimate Fighter season 20 competitor will never be accused of being a shrinking violet.

Oh yeah, she can fight too, and considering that she was one of the eight 115-pounders selected for the upcoming season of TUF without having to go through the tryout process, that’s a big deal. And an impressive feat considering that she only began training in 2010, a run interrupted by a pregnancy and the birth of her youngest son Enson (yes, named after MMA veteran Enson Inoue, just another reason to be a Rawlings fan).

So in essence, she’s only actively been in the game for around three years, and when you add in that she comes from a place in Australia that is only now starting to catch up with the MMA world, that makes her rise even more notable.

“It’s not very big,” she said of MMA Down Under. “In Australia now, it’s what it was in America when you first started. There are still a lot of narrow-minded people. They don’t know what mixed martial arts is unless you say cagefighting and then they realize what it is. So it’s slowly getting there, but it’s definitely really hard for a girl because of a lack of opponents and training partners. It’s come a long way in the few years that I’ve been in it though, so I’ve got hope.”

More than hope, she’s got talent and a fighter’s heart, a combination that has led her to a 5-3 record that includes three Stateside fights for the Invicta FC promotion. Now she’ll get a chance to compete with the best in the world in a tournament that could change her life and possibly garner her the first strawweight championship in UFC history. It’s because of all this that she stuck it out in the sport against all odds.

“I honestly fell in love with it and it changed every aspect of my life when I found the sport,” she said. “It definitely humbled me and showed me how to respect other people and how to respect myself and my body. And I’ve always been a fighter. All my life I’ve been fighting for something. I was the youngest of four children so I had to learn to defend myself (Laughs), so it was a natural thing for me, and when I started doing it I fell in love with it and realized that I was actually good at it, so it was too good and too big of an opportunity to just give up on it. I knew I just had to stick at it and my time would come and I’d get the break to go overseas and really showcase my skills.”

Along the way, she garnered a pretty impressive fan base that includes nearly 17,000 Twitter followers, a number sure to rise after viewers get 12 weeks of “Rowdy Bec” on TUF. So what is it about the Melbourne product that has fans filling up her bandwagon?

“I think it’s my personality and I guess my fighting style as well,” she said. “I’m very aggressive in the cage, so I bring a very exciting fighting style, and no matter what, win or lose, they know that they’re going to get an awesome fight and be entertained. Plus there’s my personality and my background. I’m a mom of two kids, I’m covered in tattoos, I have crazy hair and I’m always bubbly, so I think a lot of people are drawn to that because they know that I’m not stuck up or like a diva. I’m like anyone else off the street. I just stay true to myself and I don’t let anything get to my head and be someone that I’m not.”

And while she’s always quick with a laugh, on a more serious note, she drew the admiration of the fight community when she went public with abuse allegations against her ex-husband. It was a brave move, especially for a pro fighter, but that was the point.

“It was hard,” she said. “It took me a few months to really get the guts to do it and just embrace it. I was very embarrassed. I have a lot of fans that look up to me and say that I’m an inspiration to them, and I felt like I was a letdown for them because someone that’s meant to be so strong and opinionated shouldn’t let someone drag me down and treat me the way they did. I felt embarrassed. It was very hard, but I knew it was also going to help other people to show that it can happen to anyone. And I wanted to create awareness that it’s not okay and it’s time to make a stand.”

She did, and with a change back to her maiden name, Rawlings started fresh again, ready to take on the world. And after what she’s been through, six weeks with 15 other fighters, several of whom she would call friends, is no big deal.

“I’m very laid-back, so I don’t think it’s really going to affect me very much,” she said of life on TUF. “I don’t think I have to do very much mental preparing because nothing fazes me. The hardest thing will be being away from my boys, but in the back of my mind, I’m doing this for my boys so I can give them better opportunities. At the end, it’s all worth it, so I don’t think I’m going to have any problems in there.”

So what do Enson and his older brother Zake have to say about mom being away for the next month and a half?

“They call it punchy-punch, so I just let them know mommy’s going to play punchy-punch and she’ll be back soon,” said Rawlings, whose kids will stay with her family during the TUF taping. “They love being with my family anyway, so they’re just like as long as you bring me a present back, I don’t care. (Laughs)”

A championship belt wouldn’t be bad either.

“I think this (TUF 20) is going to do amazing things for the sport,” she said. “It’s definitely going to bring legitimacy to our division as well because a lot of people might not be aware of the strawweight division. And so it’s going to introduce us to them, and to have the best people there, fighting three times on the show and locked in a house, it’s gonna get crazy and it’s definitely going to bring a lot of spotlight to our weight division that we’ve been dying for. We deserve the attention and I think we’re just gonna shine and prove that girls can fight.”