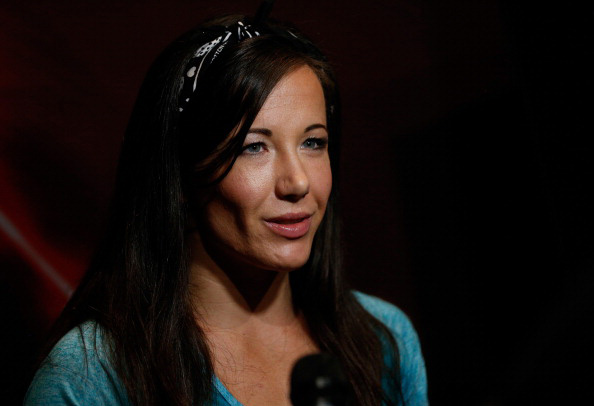 The next time your venti mocha latte with whipped cream on top isn’t the right temperature or has the requisite amount of mocha, venti, or whatever they put in those things, you may want to look at the life of The Ultimate Fighter 20’s Angela Magana and get your priorities straight.

From the time she was born, the California native was seemingly destined for disaster. And no one would have been surprised if she went off the rails as the daughter of a heroin addict and someone who, as an adult, shattered her spine when she plummeted down three stories and later spent a few days in a coma after the second of two serious car accidents.

That’s not who Magana is though.

“I’m an optimist for sure,” she laughs, but even optimists would be shocked by her level of positivity. She doesn’t see it as a big deal though.

“I believe the secret to life is to not have everything you want but to want everything you have, and know that everything has already happened perfectly. There’s always been something inside of me that pushes me to do better, to never think of myself as a victim but to always be a survivor and have that mentality.”

Survivor may be the better way of describing the 31-year-old, who will likely see her optimism tested by six weeks in a house with 15 of her 115-pound peers all shooting for the same goal – the UFC’s first strawweight championship. Ask her about it though, and the way she sees it, the competition is already over.

“I already feel like I made it,” Magana said. “To be able to walk into that gym is winning in my book. That’s what champions do. And I am a champ at life.”

It’s hard to dispute the sentiments of Magana, who has a house in New Mexico and one in her current home base of Thailand, where she lives with her 12-year-old daughter. If it seems that a Los Angeles native and Thailand is an odd pairing, it is, but in addition to her training, Magana has also found peace in Phuket, a place she initially intended to visit for only three weeks. Three weeks turned into two months, and after that, she knew she had arrived in her new home.

“It might have been a big adjustment, but it’s a happy adjustment,” she said. “They’re all Buddhists, nobody judges each other, everybody’s very relaxed, and everyone’s on Thai time so nobody rushes around for anything. I just love the no judgment, peaceful way of life.”

She’s become so enamored with the place that when she comes back to the States, she misses the sounds of the monkeys, frogs, crickets and lizards that inhabit Thailand. But if having to miss those things for a little while in order to chase her fighting dreams is necessary, she’s all in. So when the opportunity arose to try out for TUF 20 arrived, it was a no brainer for the 11-6 pro, who has fought a trilogy with highly-respected Jessica Aguilar and also stepped into battle against Jessica Penne and Jessica Eye.

“I still feel very fresh and I feel like I have a new lease on fighting, especially now with all the UFC stuff happening,” Magana said. “I feel like I still have another good eight, nine, ten years to go. Even (UFC welterweight contender) Robbie Lawler, seven, eight years ago they were saying he was done, and now look at him. So I feel like I have a lot of longevity left.”

Magana may be right, and if she is, we’ll get a first taste of it on TUF 20, which premieres tonight on FOX Sports 1. But even if she doesn’t win the tournament, just making is back is enough of a reason to celebrate her, especially when she was told after her car accident a year and a half ago that her fighting days were over.

“I was told that I would never fight again,” she recalled of the aftermath of the accident in Las Vegas, in which the car she was driving was cut off, sending it off the road, where it flipped five times. “They (the doctors) were pretty harsh. They were dream smashers, but I still didn’t let that get to me. I pushed on through and was able to fight.”

She returned to action in 2013, and though she was submitted by Stephanie Eggink, she made a point that it would take more than a car accident (or two) to stop her. And Magana was determined that the UFC would be the next step.

“I always felt that I would one day be in the UFC, even when it was unthinkable, when (UFC President) Dana White said there was no way he would ever allow women in,” she said. “But I’ve already made it. I have everything I could possibly want, my life is fulfilled and great, and this is just a huge added bonus.”

Magana has more than earned a bonus for everything she’s experienced, but don’t expect her to say something like that. For her, life is good today, and that’s all that matters.

“I’ve got a house in the mountains and a house in the jungle,” she laughs. “I’m completely happy and I’m the richest woman I know, and I’m not talking money. I have blessings every day. Just to be able to get up every day and be healthy, that’s huge.