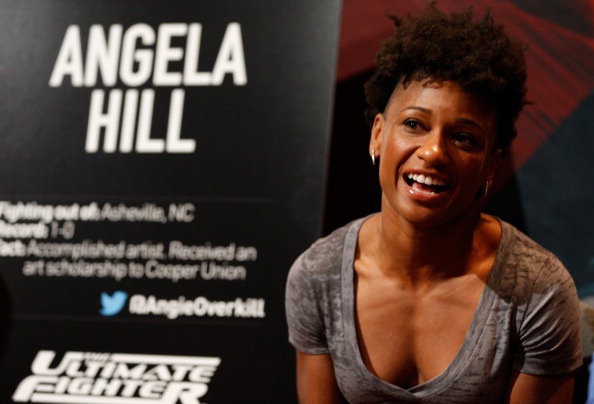 There’s something about women and Muay Thai. Just walk into any gym specializing in the Art of Eight Limbs and you will see plenty of ladies sparring, doing pad work and generally becoming fearsome fighting machines. So what’s the attraction? The Ultimate Fighter 20’s Angela Hill has an idea.

“For me, it was the way it makes you look,” she laughs. “When I first started, I did it as a workout and the first thing I asked was ‘is it going to make me bulky?’ That’s what girls who don’t work out think about. And I would see women who were pro Muay Thai fighters and they had these beautiful, lean athletic bodies, and I’m like ‘okay, I like that, I want that.’ So that’s one of the reasons.”

That’s not all though, as the Brooklyn-based Hill is quick to point out.

“That and being able to use knees and elbows,” she said. “I think women are just vicious creatures to begin with. There’s just something about us.”

The world will see that something on display beginning Wednesday night, when the all-female edition of the long-running MMA reality show premieres on FOX Sports 1. Pitting 16 of the top 115-pound fighters in the world against each other in a tournament that will crown the UFC’s first strawweight champion, anticipation hasn’t been this high for a TUF season in a long time, and charismatic and talented fighters like Hill are the reason why. But the unbeaten Maryland native doesn’t exactly fit the mold of a lifelong athlete training for decades for this opportunity. In fact, she kind of stumbled on to it.

“When I was growing up, I was a pretty quiet kid,” she said. “In my family, they’re big, loud, energetic people and I was kind of like the weird little kid drawing in her sketchbook in the corner.”

But after moving to New York to attend and graduate from Cooper Union with a Fine Arts degree, Hill wound up in the Evolution Muay Thai gym in the Big Apple.

“I was considering kickboxing because I thought ‘oh, that will be fun – I get to kick things, I get to punch things,’” Hill recalled. “But then somebody said I should try Muay Thai because there’s elbows, knees, punches and kicks.”

She was sold. Her mom, not so much.

“It was strange for her to think about it,” Hill laughs. “She was afraid about me moving to New York once I got out of high school, then I survived college in New York and ended up really liking it, so she was always surprised by that. And so when I told her that I started doing Muay Thai and wanted to fight, she was like ‘oh really?’ But somehow I convinced her that I’d be safe and there was nothing to worry about and so she was okay with it. And the more that I won, the more she was okay with it.”

Hill won – a lot – going 14-0 as an amateur before turning pro. The reasons for going into the punch for pay ranks weren’t financial, just like the decision to compete in the first place wasn’t based on any goals loftier than testing her training out in a live situation. But things certainly progressed quickly.

“Every time I fought, I had a new goal, but I never started thinking that I would go pro and make a living off of it,” the 29-year-old said. “My first fight, I just wanted to try it out because I had been doing well in sparring and my coach was like ‘hey, do you want to compete?’ I had never thought about it, but sure, why not. And every opportunity since then has been kind of similar. (In Muay Thai) The competition, once you get past 10 fights, you’re not really fighting anyone who’s on your level until you go pro. And until you go pro, except in Thailand, you can’t really fight with full rules. So it wasn’t to make a living off of it, because I felt like I couldn’t. It was more so having an interest in pushing myself to that level and learning how to fight to the point where no matter where the fight goes, you’ll be able to defend yourself and cause the other damage.”

Two wins followed in her first two pro Muay Thai bouts, and in April, she made her pro MMA debut with a second round TKO of Stephanie Skinner. Next up were the TUF 20 tryouts and a six-week tournament against the best in the business. But was she ready?

“Once I made the decision to do MMA, I started training hardcore with my grappling, wrestling and jiu-jitsu,” Hill said. “And I train really hard, but I also keep the confidence in the thing that I’m good at, because that’s the thing that’s been proven over and over in competition, and my striking is better than most people’s striking. So I have a lot of confidence going into this and going into a career in the UFC, and what better platform to be on and what better motivation is there to perform well than to be on TV, where my family can watch it, and where I can inspire people I don’t even know from all over the world? It’s really crazy but I’m really excited about it.”

And suddenly, the young lady who just wanted to get in shape and not be bulky is on the verge of being a role model for a new generation of fighters who have the doors open to them to compete in the biggest promotion in the world while getting treated like the pro athletes they are. That wasn’t always the case, and Hill, while relatively new to the game, has certainly done her research on those who came before her, and she’s happy to be part of the second wave of WMMA standouts.

“The thing about MMA, especially for women, because there wasn’t that much interest in it before, we end up performing on these local shows and not getting paid much and there’s no appreciation,” she said. “So a lot of talented fighters lose the motivation to train and participate in the sport just because of that and being mistreated as fighters and athletes. I feel like a lot of the girls who made it into the house were on the verge of retiring because they were getting sick of it, so it’s really cool that the UFC came when it did because there’s so much talent out there.”