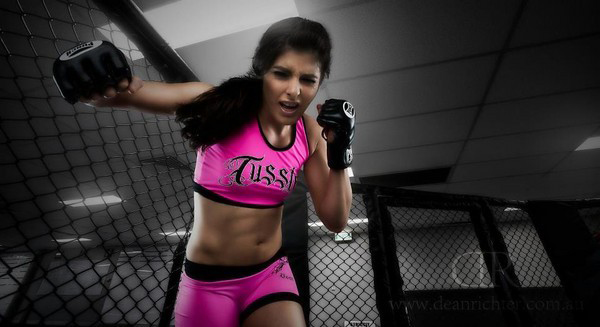 I didn’t want to break the bad news to Alex Chambers, but it’s very possible that when filming for season 20 of The Ultimate Fighter begins shortly, she might become one of the most hated people on the cast of 16 strawweights.

Why? Well, consider that as a fighter who has spent her career fighting at the atomweight limit of 105 pounds, making the 115-pound strawweight limit probably won’t be the issue it could be for her castmates.

“If that’s the way it’s gotta be,” she said before breaking into a laugh. “I don’t know if they’ll hate me, but I’ll probably be rubbing it in a little bit by eating what I want around them, that’s for sure. So I’m sure I’ll get a few haters for that one.”

Hey, whatever advantage you can get in a competition like this, you’ll take it, and though Chambers will likely make a sweat-free cut to 115 pounds, the flip side is that when she fights, the five-foot-three Sydney product will be giving up some size to her foes. Again, that’s not an issue for the unflappable Aussie.

“I’m not too concerned,” she said. “I’ve always kind of fought people who were a bit bigger than me, so I look at the advantages. I don’t have to cut much weight, especially in the house, where you could be fighting a few times. So I’m comfortable where I’m at.”

That goes for where she sits in her career as well. A longtime karate practitioner, Chambers moved to MMA as an adult, getting a crash course in the sport during some training sessions in Japan with female fighting pioneer Megumi Fujii, as well as Strikeforce vet Hitomi Akano.

“I competed in karate in Japan a few times and I really wanted to get into MMA, so I went over to Tokyo and trained with her (Fujii) and Hitomi Akano, who fought in Strikeforce, and that really inspired me to pursue my MMA dreams. I really wanted to have the opportunity to train with one of the best female mixed martial artists in the world, and I couldn’t pass that up. It was a way of seeing where I was at, training with people like that.”

Being an MMA fighter in Australia was tough enough at that time, shortly before the UFC made its maiden voyage Down Under. Being a female MMA fighter was even tougher, with the doors to entry even harder to break through.

“It actually took me about a year or so to get my first professional fight,” Chambers recalled. “My coaches had been looking for a fight for me and it was very difficult.”

Finally, after a few opponents fell by the wayside, Chambers debuted in May of 2010 with a three-round decision win over Jessica Tolhurst. She would get another fight two months later, but nearly two years would pass until her next bout.

“It was very different back then,” she said. “There was a stigma attached to being a female doing martial arts and back then it wasn’t widely accepted. It wasn’t something that I actually talked about either. I’ve always been proud of doing martial arts, but I used to get a negative response to it.”

It’s a common tale among female fighters, who are finally starting to see the light of the day in the sport thanks to the UFC’s introduction of the women’s bantamweight, and now strawweight, divisions. It’s a day the 35-year-old Chambers expected to see, just not while she was an active fighter.

So did she ever think of going on a binge at the local Hungry Jack in order to move up to 135 pounds?

“I’ve always kind of been this size my entire life. It would have been a bit unrealistic for me to look at going up to 135. My coaches made a few comments, but we kind of knew that it wasn’t realistic. Some of those girls are pretty big-boned. I had a chance to train with (UFC bantamweight contender) Miesha Tate when I was in Vegas at Xtreme Couture, and it’s just too big a size difference.”

That won’t be the case on this season of TUF though, and things are about to take on a whole new dimension for “Astro Girl” (who got her nickname because she studied Astrophysics in university).

“We’ve been told that the craziness is coming, but it’s going to be a good season,” said Chambers, 4-1, who has already been in town to get acclimated to the time difference and – most importantly – the Vegas heat. “I had the chance to hang out with some of the girls when we were there for tryout week, and there are some really good personalities there and we’re all quite friendly with each other, but I know that this is a serious thing, and once we get into the house, it’s on. Everyone wants that belt.”

That goes for Chambers as well, and while she’ll be in a tournament with the best strawweights in the game, she’s focusing on her own attack heading into taping.

“All those girls have different strengths and you don’t know who you’re going to go against,” she said. “It could be Joanne Calderwood, who’s a really good striker. It could be Carla Esparza, who is an excellent wrestler. I’m focusing on developing my own skills and working areas I need to, and I’m going to impose my game.”

If she does, winning the opportunity to fight for the UFC’s first strawweight title on the season finale card, it will be a game changer; not only for Chambers, but for female fighters in Australia. It’s a topic she hasn’t considered yet, but in a couple months, it may be a reality, one she should handle just fine.

“I haven’t actually started thinking about things like that,” she said. “I’m focusing on my training at the moment – getting fit, strong, and ready, and working on all the things I need to work on, and that’s my focus at the moment. And when I’m in the house, it will be focusing on one fight at a time. I haven’t considered what will happen or how my life will change. I’m a very down to Earth person and I can’t imagine it changing who I am.”