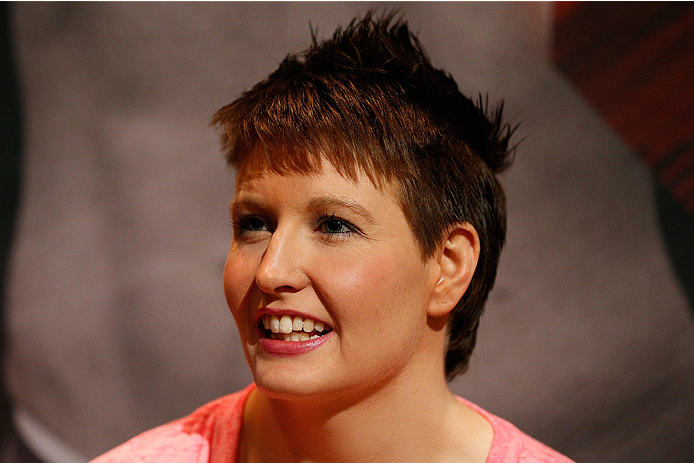 When you think of Irish MMA, the first name to come to mind is that of “The Notorious” Conor McGregor. Close behind will likely be Cathal Pendred and probably Patrick Holohan. But the next name from the Emerald Isle that fight fans will be talking about is the first one who was in Dublin’s Straight Blast Gym – Aisling Daly, whose road to the UFC begins on season 20 of The Ultimate Fighter.

And if you want to talk about TUF 20 being a long time coming for several of its competitors, you can start with “Ais the Bash,” who made her pro debut in 2007.

“In all honesty, at the TUF tryouts I felt I was knocking on the door of the UFC anyway,” the 26-year-old said. “I am one of the most experienced strawweights in the world and I have wins over some top-class competition. I figured TUF would probably speed up my road to the UFC and gain me some exposure, so I took a chance on trying out.”

Pre-2013, those knocks on the door would have gone unanswered, not just for Daly, but for all female fighters. Current bantamweight champion Ronda Rousey changed all that, and with the introduction of the 115-pound strawweight division this year, the floodgates finally opened for women who didn’t take this up as a lark, but have dedicated their lives to the sport. So when you ask fighters what the goal was before the UFC started featuring female competitors, they weren’t bemoaning their fate; they were going to fight regardless.

“Before the beginning of the women's division in the UFC I didn't see UFC as a possible goal in my career time,” Daly said. “I have always loved fighting and competing and I started at a time when MMA was unpopular in general, and not just female fighting. I never needed approval from anyone. Long term, I figured I would continue to compete and enjoy fighting, but ultimately it would a glorified hobby and I would need to make a living by other means.”

Attitudes like that separate the wanna-bes and those who actually get up at ungodly hours to train and dedicate themselves to something that doesn’t produce the typical – or even a tangible – reward. That’s what life was like for Daly in those early days, but she didn’t care if she had a big paycheck or shiny medal to show at the end of a jiu-jitsu competition or a fight.

“The most attractive aspect of mixed martial arts to be me is the level of competition,” she said. “I have always been a competitive person and I see MMA as being the ultimate form of physical and mental competition. I am never concerned with my opponent and see each bout as an opportunity to test myself.”

In 2007, she made her pro debut with a submission win over Nicole Sydboge and she was off and running. It was uncharted territory, not just for Daly, but for Irish ladies in general, as there were few, if any, local role models to follow.

“Strangely enough I didn't have any outside fighting influences,” Daly said. “I almost stumbled across MMA and fell in love with the technical and competitive aspects of it. I didn't really have any female role models to look up to as such, but I remember finding a Dutch fighter Nadia van der Wel online who was a similar age to me and competing in MMA. This really inspired me to get continue trying to get fights and I later was fortunate enough to be able to compete against Nadia.”

Daly stopped van der Wel in two rounds in her fourth pro fight in November of 2007. She won her first nine bouts before a defeat to her future TUF 20 castmate Lisa Ellis, but by then, there was no turning back for the up and comer, who also picked up a win over current UFC bantamweight Jessica Eye in 2011. And back home in Ireland, she was treated like any other fighter.

“Honestly, I have faced very little prejudice at home, as fighting in general has always been a big part of Irish culture,” Daly said. “Ireland has an extensive boxing history, and with this, female fighters were welcomed alongside male competitors. On occasion I do meet someone who is ignorant to the sporting and technical aspects required to be a female mixed martial artist but I don't waste too much time on these people.”

She didn’t have time to waste, as she had a career to tend to. That doesn’t mean it was all smooth sailing, especially at the start.

“The biggest thing I remember about the early days was the difficulty I had in finding people to compete against,” she said. “I would constantly be spending time online looking around the world to see if there were other girls I could compete against. There was very little competition internationally and none at all at home. Eventually I got a break in 2007 and was offered a matchup at 145 pounds which I took. I made my pro debut on a show called Adrenaline in Denmark alongside my teammate Gunnar Nelson, who was also making his debut.”

Seven years later, Nelson, McGregor, Pendred, and Holohan all entered the Octagon at the O2 Arena in Dublin and tore the roof off the place on a UFC Fight Night card that turned into one of the most memorable in recent history. The only one missing from the SBG contingent was Daly, who was in Las Vegas taping TUF 20. She was most certainly there in spirit though and plans on not just being there in person the next time, but to be in the Octagon.

“Emotions were in overdrive when I first got to see my teammates compete,” Daly said. “Being isolated away from the event and not getting to witness it in person was very difficult for me. I felt very helpless. I am so close to my team, and particularly Paddy Holohan is my best friend and closest training partner, so I had no idea how his preparation had gone or how his mental state was. It was very emotional for me, but in the end with all the success, I was completely elated. I was so happy for my team and so proud to be Irish. The Irish fans were amazing. The welcome and support they gave their countrymen, I have never seen anything like it at a UFC event. I cannot wait until the day the UFC comes back to Dublin and I get to make that walk to the Octagon with a tricolour wrapped around my shoulders.”