Meet The Man With The Mullet: Aaron Jeffery

Canada's Aaron Jeffery Is Excited For The Opportunity To Put On A Show Against Prospect Collin Huckbody AT CFFC 93.
By Walker Van Wey • Mar. 8, 2021

Despite facing an ice cold killer and main event pressure, mullet-sporting Canadian Aaron Jeffery is feeling pretty cool, himself, as he puts the finishing touches on his training camp.

CFFC 93 is in for an incredible, mysterious treat, as DWCS contract winner Collin Huckbody turned down his opportunity to fight in The Show. Huckbody didn’t turn away to seek greener pastures; the exact opposite, in fact. Huckbody was out to improve his game so that he could avoid being one and done in the UFC. What does that mean for the promotion who got their hands on him in the meantime?

A show stopping, UFC-ready animal about to be let out of his cage.

Standing opposite Huckbody is Jeffery, the 28-year-old middleweight from Ontario.

While Jeffery lost his DWCS fight against current Octagon standout Brendan Allen, he is 9-2 with finishes in organizations like LFA to add to his naturally calm demeanor.

Aaron Jeffery of #CFFC93 is all business while breaking down Minowaman's mullet. pic.twitter.com/GVCl0BCJhB

A phone call with Jeffery may confuse most into thinking he was an NPR host, not a fighter with eight finishes. On the mats and in the cage he’s a finishing machine, but outside the gym he’s a simply a mullet-enthusiast with a resting heart rate most of his peers would envy. The “what ifs” in the minds of most fighters and fans might be things along the lines of what may have come of DC’s career had he not gone to 205 pounds to not face his friend and teammate Cain Velasquez. Jeffery ponders such questions, sure. But his mind wanders elsewhere from time to time as well.

“Maybe back in the 70s and 80s when everybody had mullets then maybe it was an ironic thing and they were all doing it for fun,” Jeffery proposed. “We look back at photos and it’s funny. Maybe it’s kind of the same thing now where everybody’s growing out mullets because it’s funny.”

The disarmingly serious and mellow delivery of everything Jeffery says makes his personality even more addicting. Ever the eccentric, Jeffery is also self-aware and, in the most modest way imaginable, also entertained by his personality.

“Whenever I see interviews of myself, I think I’m so monotone, and I seem like I’m so serious,” Jeffery said. “I over pronounce everything, no change in the pitch of my voice. I guess it’s just how I talk.”

Skill played a factor in the scoring on this one.

It isn’t all mullets and analysis for Jeffery, though. He has very high hopes and expectations for his career. Thus far, the only two people to defeat him have been future UFC stars with promise. Despite the knowledge of his potential, and possible UFC-level skills now, Jeffery’s UFC plans are as unique, honest and refreshing as his personality.

He’s all about that long game.

“I always say this,” Jeffery prefaced. “Go to the 185 rankings, scroll all the way to the bottom, pick the worst guy on the list and I want to beat him up. Honestly, I’m here to make money and stay in the UFC for a while. I’m not trying to get into the UFC and pick the number five ranked guy right away and get beat up.”

Is it possible a fighter with this mindset and this level of intensity to be UFC-ready? If we’ve learned anything from Jeffery’s track record, it’s that actions speak louder than words. 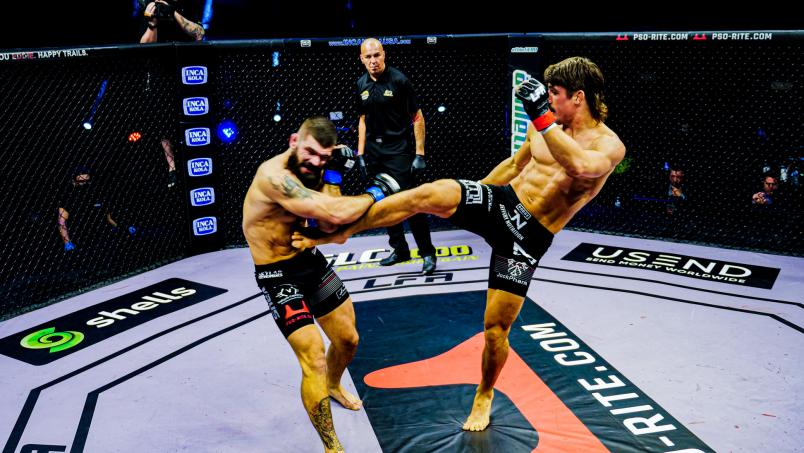 Dana White deemed Collin Huckbody UFC-ready. Anybody in the MMA world understands that the stamp of approval comes with a lot of weight. In a show dedicated to not only choosing the best fighters, but the most exciting ones too, Huckbody is a special kind of killer. But Jeffery is as confident as ever when explaining that he’s the special kind of killer it takes to look this reality in the face and welcome the challenge.

“I think I’m more well-rounded than him,” Jeffery said. “He looks like somewhat of a good grappler, but he looks kind of uncomfortable on the feet so I think I’ve got him there. I think I can be more gritty than him and grind him out in deep waters.”

Win, lose or draw this won’t be the last the world sees of Aaron Jeffery or his mullet.

Watch Aaron Jeffery and Collin Huckbody battle it out for the CFFC middleweight title at CFFC 93, Friday, March 12 ONLY on UFC FIGHT PASS!