Fighting out of: San Diego, California

Welcome to the UFC APEX, and congratulations on making it onto the 30th season of The Ultimate Fighter! How does it feel to be here?

I am so blessed, grateful, excited, and ready to kill, honestly.

How would you describe your fighting style to those who haven’t seen you compete before?

Wild. My teammate Alima calls me a wild card. I throw a bunch of crazy stuff. But, if you end up on the ground with me, I will break it. Tap fast because I’ll break your leg, I’ll break your arm, and I will literally break it in half if you don’t tap.

What’s it been like to train with the likes of UFC strawweight Angela Hill? Did you talk to her before you left for the tournament?

Absolutely. Angela Hill told me to keep to myself because we’re all fighting for ourselves here. And she said to just really pay attention to how I speak. From her experience, there were some things caught on camera that she thought were funny, turn around and people said really mean things to her for a long time for it, and she just said to remember that this is your legacy, and how your attitude is on camera will follow you for a really, really long time, if not the rest of your life. So, I took that to heart.

Training with Angela Hill, personally, since I’m not the strongest striker, I have to have constant movement. Because when her punches land, they do have knockout power and they hurt really bad, too. So, if you see me training with her, it’s kind of like I’m dancing around, throwing some spinning heel kicks, few wild things here and there, to try and get a clinch on the cage to go for a takedown.

Do you feel like training with Angela Hill may give you an edge over your opponents in the tournament?

Yes and no. Everyone in here has trained with high level athletes. Some of the girls train with Raquel Pennington, and we all train with the best in the world. What I believe gives me an edge over the other women is my mindset and the mental work that I’ve done. I don’t think it has anything to do with the physical part of it, if I’m being honest. I think a lot of the show is mental.

With that said, do you believe that living in the same house as your opponent will be the biggest challenge, given that this tournament is more of a mental challenge?

I think it’s going to a constant challenge for us. We don’t really know these people. For me, I think the biggest challenge is going to be living with the heavyweights. None of them are cutting weight. They eat whatever they want all the time. And the producer is like, “What do you want to eat?” And some of the guys are like, “Bread, ice cream, cookies.” I can’t f*ckin have any of that. For me, I’m going to probably want to keep a lot of time for myself. I’m probably going to be like, “Hey, let me smell that,” because sometimes, you can smell something so hard you can taste it.

Catch Up On All Things Ultimate Fighter

Besides that, I don’t have a problem training with the people I’m going to be fighting. May the best woman win. I’m fearless going in there. Partially fearless. No one wants to get there face split open. But I think what has happened is meant to be, and as long as you give your heart and soul on that stage and you have a good attitude, then nothing bad is going to come from this experience, even if you were to take a loss. Nobody wants to lose. And I do believe 100% that you’ll see me in the finale.

However, I think your personality is one of the most important things that’s going to come through and shine through. So, I just want to be a good teammate, and a good roommate, and I want to respectful to the other girl. However, I’m not trying to make a best friend. I’m a very social butterfly, but this time I want my space and I’m going to keep to myself.

Which coach do you believe better suits your style, Julianna Peña or Amanda Nunes? 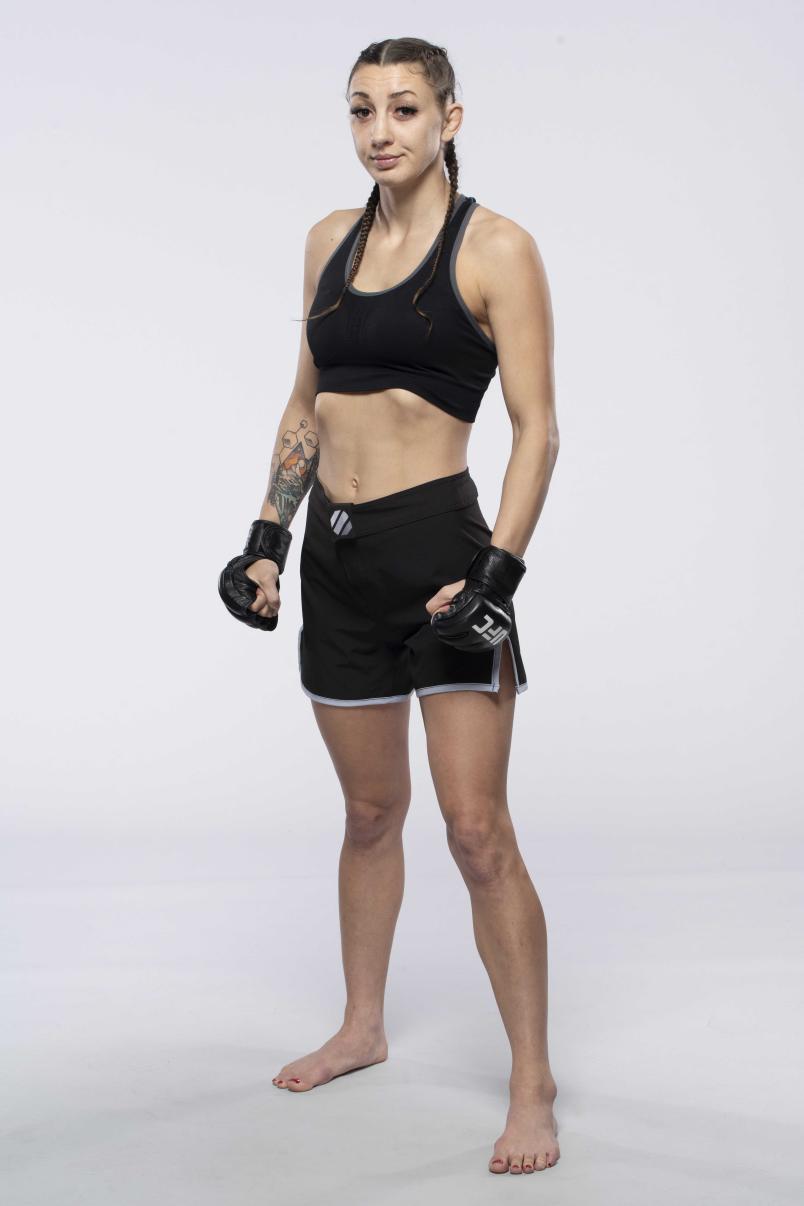 Well, Julianna and Amanda are both incredible athletes and coaches. For me, I would prefer to be under Amanda. She has incredible striking, and obviously so does Julianna. Amanda being a black belt in jiu-jitsu, I think that I have the best jiu-jitsu out of any girl on this card. That is my strength. So, if I can really work in some wrestling, anti-wrestling, and hard strikes, I’ll be unstoppable. However, I do feel that Julianna is really good at those things, too. So, for me, it comes down to the fact that Amanda has been a hero of mine since before I can remember. She was one of the first three woman I saw fighting and I was like, “Oh my God, she hits like a truck, I want to learn how to do that.” Look at these shoulders, I got some big ass shoulders. If I learn how to throw these bad boys the right way, I’m going to be unstoppable.

You’ve also been a commentator for a few smaller organizations in the past, how has that helped your confidence? Does it give you a different perspective on fighting?

Commentating helps because it gives you a confidence in your voice and in your speech. I will say, I’ve only been lead commentator once. Besides that, I started with just a few fights, and my first two times commentating, I messed up so bad with the referees’ names, and if I said a fighter’s name wrong, I was constantly questioning myself for it. But the thing is, it’s hard if you don’t speak with them before the match. But what I learned is people care more about what you say about them while they’re fighting, and how you choose your words.

Commentating really helped me choose my speech in an intelligent way. I learned how to have confidence in my voice, and I also learned that it is fun to get beautiful for the camera. Just because you’re a killer, doesn’t mean that you have to underplay your personality. My personality is wild and free. I’m all over the place. I’m a little crazy and love to have fun. So, as much as there is a fun side to me, I’m excited for the world to see the motivational parts that, even if you’re not the best fighter in the world, there’s other things in this sport you can be a part of. Some of the best coaches in the world aren’t the best fighters. Some of the best fighters in the world aren’t going to be the best coaches.

Why do you believe that you’ll be the one to win the 30th season of The Ultimate Fighter?

I believe that I’m going to be the one to win this season because I am hardheaded, and I work consistently on my emotional intelligence. I believe in myself, and in a most respectable way. I don’t take anything away from the other girls. I am the youngest on this card and I have the least experience. However, I don’t think anyone in that room has done the emotional intelligence work or courses that I have. I know how to work my brain, and I’m strong in my brain. Sometimes, I think that people’s performances end up being a bit weary when the pressure is on. When the pressure hits, or when they’ve been living with someone for too long, or when they’re missing home. I am prepared for all of this, and I have trained my mind for all of this. There’s nothing that can break me. I can lose a fight and still won’t be broken. However, you won’t see me losing now.