"The stage, the show, the fans, that doesn’t matter because I’m always gonna fight my fight." - Cat Zingano 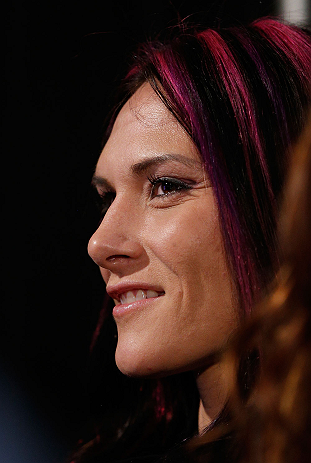 In the annals of toughness, there aren’t too many instances that can match Miesha Tate’s refusal to give in against Ronda Rousey’s lethal armbar until the last possible moment back in their 2012 bout. But Tate’s opponent this Saturday on the Ultimate Fighter 17 finale card in Las Vegas, Cat Zingano, not only has one that matches Tate’s feat, it surpasses it.

Try 32 hours of labor when giving birth to her now six-year-old son, Braydon.

“Not fun,” she says in the understatement of the century. And while you wouldn’t normally associate such an event with the fight game, Zingano has used it as fuel.

“If you don’t want to quit at least once in every practice, you’re not working hard enough,” said the unbeaten bantamweight, who hasn’t quit yet. Subsequently, she finds herself in a most interesting position for her Octagon debut, which also marks only the second female fight in UFC history. With a win over Tate, she will secure a shot at Rousey’s UFC women’s bantamweight belt, as well as a spot alongside “Rowdy” Ronda as a coach on season 18 of TUF.

Ask Zingano about the dual pots of gold at the end of the rainbow, and she’s one of the rare fighters who sounds even more excited about possibly coaching than the title shot.

“I’ve been coaching and cornering fighters for the last five years, so I know what I have to offer, I know where I can bring fighters to, and I know that I have the mind game, the physical game, and the emotional part all covered for these fighters, and I’m really looking forward to get in their head,” she said. “But that will not happen unless I get through this big fight, and that’s really what I’ve got my focus on right now. I’d love the opportunity, I can’t believe that’s what’s in my hands, and at the end of it I potentially get to fight Rousey, and that’s what I’ve been dying for this entire time. So it’s great. I want to be a world champion, but I’m here to take the steps to get there first.”

Heading into the bout, Tate is the favorite and the better known of the two thanks to her Strikeforce fights and her groundbreaking match with Rousey. But Zingano (formerly Cat Albert) has not dropped out of the sky and into the Octagon. A pro since 2008, the former college wrestler may not have the number of fights that her opponent has, but she certainly has a high skill level and the experience to fight on the sport’s highest stage. It’s just that when you’re a wife and mother, things in your professional life don’t always go according to plan.

“In between the last few fights that I’ve had, I’ve had to take a little bit of time off because being a mom and having a personal life has come first,” said Zingano, who is married to Brazilian Jiu-Jitsu black belt Mauricio Zingano. “And now that my son is getting a little bit older, it’s easier for me to train and easier for me to be able to focus on that and separate the home and work life a little bit more. And now I’m back, I’m strong, my heart and will are bigger than ever, and this is my time. I’m ready to put everything I have into this and I’m able to take care of my family at the same time. So I’ve always been ready for all this. I’ve been around for a while, but I haven’t been able to fully apply myself to getting as many fights as I would like to. When I started, I wanted to fight every couple weekends because I thought it was so fun. (Laughs) But when it came down to it, it’s really not that simple.”

Currently 7-0 with three wins by knockout and three by submission, the 30-year-old from Broomfield, Colorado is a finisher, something that should make fight fans who haven’t seen her before quite happy. And if they haven’t seen or heard of her yet, that’s fine with Zingano, who sees Saturday night as an opportunity to make a memorable first impression.

“That’s the cool part because I get to wow people,” she said. “That’s a good feeling to have. I’m very intense, I like getting in there and being explosive and getting things started right off the bat, and I think my style of fighting is something that people have always appreciated immediately, so being the dark horse is a good position to be in. If they don’t know who I am, that’s okay. I have no problem proving myself and I’m excited for the opportunity.”

As for taking on the veteran Tate, a former Strikeforce champion, Zingano is confident that when the bell rings, she will be the one dictating where the fight takes place.

“I’m gonna keep doing what I do,” said Zingano, who owns knockout wins over Carina Damm and Takayo Hashi. “I don’t watch film, I don’t study my opponents; I just go out there and I fight my fight. And I’m so comfortable in that ring that I have good ring control. When it goes to the ground, it’s always because I want it to go to the ground; when it’s standing, it’s because I decided to keep it standing. When they want to grapple, I’m gonna hit; when they want to hit, I’m gonna grapple, and that’s my game plan. I live for the moment and deal with what’s handed to me. I always figure it out, and I plan on continuing to have that ability throughout all this. The stage, the show, the fans, that doesn’t matter because I’m always gonna fight my fight. I know my arsenal and I love my options, so it’s really about being confident, showing up with a good mind, and imposing my will.”

And when the going gets tough, Cat Zingano will get going. Remember, she’s got a track record of toughness.

“Everything good in life so far for me have not come from things being easy, and that’s something that I expect from everything I apply myself to that I care about,” she said. “This is just another dynamic of that.”