Medeiros won't stop fighting the adversity in the fight game 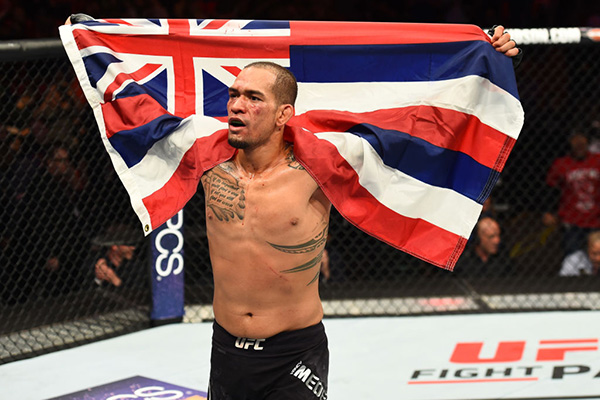 Yancy Medeiros reacts after defeating Alex Oliveira of Brazil in their welterweight bout during the UFC 218 event inside Little Caesars Arena on December 02, 2017 in Detroit, Michigan. (Photo by Josh Hedges/Zuffa LLC/Zuffa LLC via Getty Images)" align="center" />
It takes courage to walk up those four steps into the ring or Octagon, and every person who makes that walk has that. But then there are fighters like Yancy Medeiros, someone who has a little extra in his chest and is willing to give it when the mouthpiece is in and the gloves are on.

That’s not something you can learn in a gym or pick up along the way. You’ve got that or you don’t, and Medeiros knew he had it pretty early on.

“I got into wrestling in high school, and I didn’t do too well at the beginning,” said the Makaha native, who headlines Sunday’s UFC Austin event against Donald Cerrone. “I was getting ragdolled all the time. My wrestling coach called me a fish in ninth grade. (Laughs) And I was like, ‘I ain’t no f**king fish.’ I never gave up from there. Everyone was always better than me in a lot of things and I wasn’t great at everything, but I was decent at certain things and I always strived to be strong and be competitive.”

Strong and competitive are good qualities to have, but they don’t explain what Medeiros has done throughout his UFC career. Yes, there have been ups and downs, and his 6-4, 1 NC record in the Octagon won’t win any beauty pageants, but it’s his unyielding will to win, to walk through fire and any other cliché term you want to use to describe something that can’t be adequately described that sets him apart. He puts it more succinctly.

“I had a few tough years in wrestling, but they never killed my spirit,” Medeiros said. “I always knew I was strong enough and I had the will. I wasn’t a quitter. I never quit in anything I did. Once I started it, I was gonna finish it. Sometimes the fight doesn’t go my way, but the last thing you’re gonna do is make me quit. I already killed myself at practice – I trained hard, I trained smart, I go through all this adversity, and I feel that’s why I’m the way I am. I ain’t no quitter.”

Unlike boxing, the idea of tapping out in MMA doesn’t come with a negative stigma, and it shouldn’t. If a fighter has had enough, why not live to fight another day? But the 30-year-old Medeiros has never subscribed to that notion. And while he doesn’t criticize any of his peers who will pack it in when things are going south, he’s not guy. He isn’t going to check out mentally or physically in a fight, and his track record proves it.

“I don’t feel like I’m tougher than any of them,” he said. “But that feeling you described, that ain’t me. I despise that feeling. If I’m gonna enter something, I know in my heart and in my head that I’m capable of doing what I have to do to win. And that’s what I accept. If you go into a fight, you gotta accept that you’re gonna get punched and you might get knocked out or tapped out. That’s something you’ve got to accept and train for.

“And there’s that fear,” Medeiros continues. “Not the fear of losing, but the fear of not doing what you trained to do. That’s what I fear. I don’t fear the person in front of me. I fear not being able to do what I have to do and what I trained for. It’s a hard feeling to describe, because it’s fight or flight when it comes to those situations. And I’m just a fighter. I’m gonna fight the adversity.”

If you want a time capsule fight of everything Medeiros is about, you won’t have far to look, as his December bout with Alex Oliveira captures it all. It was the kind of fight every fighter says he or she has in them, but only a select few are able to deliver. Back and forth from the start and filled with near finishes and enough adversity for a dozen fights, Medeiros and Oliveira left it all in the Octagon before the Hawaiian pulled out a third-round stoppage. He had won the war once more.

When it was over the crowd roared, Medeiros picked up a well-deserved Fight of the Night bonus and earned a main event assignment this weekend. But what about his poor coaches? Is he giving them gray hair with his fighting style?

“I definitely am during the fight,” Medeiros laughs. “They’re probably pulling their hair out during my fights. The plan isn’t to block all those punches with my face, I promise. (Laughs) But sometimes, s**t happens and we have to make adjustments. And I trust my coaches. I train hard, but I also train right. And I train with great people, I don’t train with quitters. In California, I train with Nick Diaz Academy, and Nick and Nate, those guys ain’t quitters. I train with a world champion in Hawaii, Max Holloway, and I don’t have ‘yes’ men when I train, pumping me up.”

It may sound melodramatic, and it probably is, but the word “fighter” in the dictionary should have a picture of Medeiros next to it. He epitomizes what we should picture someone in this line of work to be. This isn’t a job for the faint of heart, and despite the rules and referees and all the things that make this a sport, it is still a fight, and while some have forgotten that, Medeiros hasn’t. Just point him to the arena and let him scrap.

“All these guys are talking, saying ‘I deserve this, I deserve that,’” he said. “And for me, with all this commotion going on and everybody talking about what they deserve, I’m gonna let my hands do the talking and I’m gonna let my performance do the talking. That’s the only thing I can do right now. I ain’t gonna talk, I’m just gonna keep walking, and whoever they put in front of me, these hands are gonna keep flying.”

And with three wins in a row since moving to welterweight, Medeiros is finally reaping the benefits his talent and fighting spirit have deserved. A main event win over Cerrone will only accelerate his ascent, and eventually, he hopes not to put together a string of Fight of the Night brawls, but to get a gold belt that he may want to show to his high school wrestling coach.

“If you ain’t in this to be world champ and you don’t feel like you can get there, you need to get out of this sport,” he said. “I’m trying to prove – not just to myself but to everyone around me - that I am relevant and I will become a top contender and will look for that world championship. Everything’s falling into place. It took me a while to get where I needed to be, but hey, I’m here.”