Back in the win column with a June victory over Alex Garcia, welterweight veteran Tim Means wanted another fight before the end of 2017 because that’s what guys like Means do. And when Jesse Taylor was forced out of his Sydney bout with Belal Muhammad, “The Dirty Bird” was more than happy to step in.

“They called me, I had already been back in practice a good month and a half or so, and asked if we could fill in,” he said. “Five and a half weeks notice, I checked my weight and we were good.”

And now Means is in Australia, getting ready for what could be a Fight of the Night battle with Chicago’s Muhammad. It’s the latest chapter in the career of the Oklahoma native and longtime Albuquerque resident, but in a lot of ways it’s a story not just about the fighter, but his coach.

Tom Vaughn, the man behind the Fit NHB team in New Mexico, has long been one of MMA’s most underrated coaches. The man who developed the likes of Carlos Condit and Ray Borg, among others, Vaughn has flown under the radar, content to work with his fighters and get them ready for battle.

Means, who has been with Vaughn since he was a teenager, has never left that gym, even though it can get a little rough in there.

“If it’s 105 degrees outside, it’s 115 in the gym,” he laughs. “We’ve got four fans that circulate heat, and the way you get AC going is that you better be sweating because that’s the only way to get cold air on you.”

Luckily, it’s November and things are a little more bearable. But that doesn’t mean the work is for the meek or the weak. Fit NHB and Vaughn are as old school as it gets, and that’s the way Means likes it, even if they’re not subscribing to the usual MMA belief systems.

“Guys bring up this iron sharpens iron thing and it’s a stupid saying to me because if you actually smash two swords together, they actually chip and break off and dent each other,” he said. “So you have to have a good stone that’s your foundation. Stone sharpens the blade. And that’s our drilling, our flow boxing, our sparring. We’re gonna flow spar and be realistic but take the power out of it.”

Talk to Means about fighting, and you’ll get a lesson in it from the inside. A pro since 2004, he has forgotten more about the sport than most know, but even then, not every road is smooth. Yet through the ups and downs, in and out of the gym and the Octagon, he’s stayed the course, and in his eyes, the moment everything changed was when he looked in the mirror and saw that getting out of his own way was his only solution if he was going to be a success.

“When I was getting in trouble, once I realized that I was the root of my issues and started taking on responsibility and listening, the whole world opened up to me and the sky was the limit,” Means said.

Today, the 33-year-old is a fighter’s fighter, respected by his peers and followed avidly by diehard fans. And through it all, 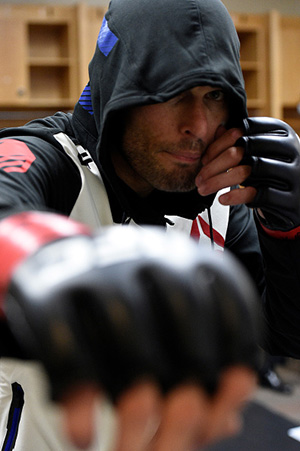 “Money changes people,” Means said. “I started getting into bigger pay brackets and Tom never changed for me. We’ve had a bunch of fighters leave and I see these guys come in the gym and I’ve seen our team change over more than probably 20 times over the years, and those individuals change. They get stuck up or you have to go out of your way to say hello to them. They just change. They get big heads and they forget.

“But I watched how hard he works for us,” he continues. “He helps build these guys into stars and they forget how much work he puts in. I’ve sat there and watched him, and people start letting individuals get in their head and start putting them on these pedestals and patting them on their little butts and telling them how much better they can do and what they need to do better and they forget about the work that put them there. I’ve been with him since I was 17 and I’m 33 now. Tom never changed, no matter where he was at. He goes out of his way, above and beyond, to do for us. And I’ll stay loyal until the very end.”

That says a lot about who Vaughn is. But it says just as much about who Means is. A high-level UFC fighter will get plenty of offers to jump ship. Means has never made that move.

“I can just sleep better at night,” he said. “I don’t have to look over my shoulder. You get these people that are always barking about loyalty and those are usually the most unloyal people you’ll come across. I just really like where I’m at. It’s a hardnosed gym, we don’t have all the cool bells and whistles, we’re just an old fashioned, old school gym. My coaches have produced so many world champions over the last 30 years. Coach Arlene, coach JJ, those guys have been there and done that and there’s no reason for me to step up and try to coach over that or try to say that I can do better than that.”

He’s right, and he’s doing just fine. If he wins this weekend, that will make him 4-1, 1 NC in his last six, and he can start making moves to the top of the 170-pound weight class in 2018. But more importantly, Means takes pride in knowing that when his name is on the fight card, people are excited to see it there.

“I think that was the point to start all this, to be known as a fighter,” he said. “I’m gonna get in your face, I’m gonna get in the pocket and I’m gonna dirty box you. If you want to shoot takedowns, cool. I respect the game, I respect mixed martial arts for that reason. It’s a chess match and there are so many different tools thrown at us. But hearing that makes me feel good.”