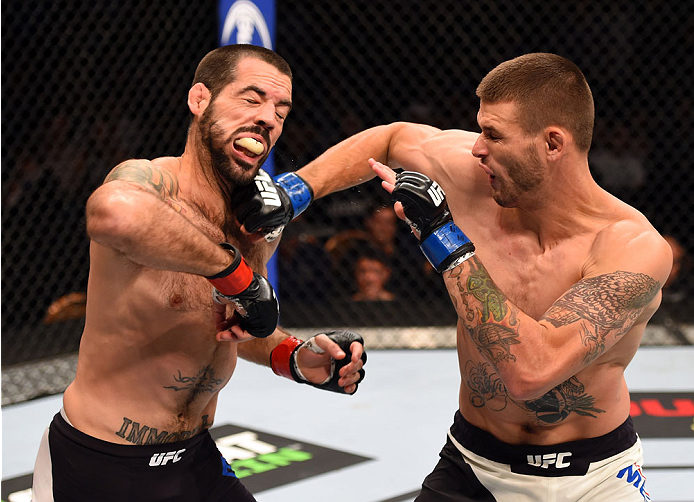 Tim Means' back story is a bit like "Breaking Bad". There's meth, guns, violence - and it takes place in New Mexico.  I won't recount it again as it's been covered many times before and the details are out there for the curious. In fact, Tim's Wikipedia page has a nice summary if you're pressed for time.

Not surprisingly, that lifestyle led to spending time in prison. Four years as a matter of fact -and public record. Four years right as his fighting career was picking up steam. Statistically speaking, incarceration is often not the incentive society would hope to turn a person's life around and stay out of trouble. Luckily for Tim, it was. He returned to fighting with new focus and amassed a 13-1-1 record and a championship belt at 160 pounds before heading to the UFC and dropping down to 155.

After going 2-2 and missing weight in his fight with Danny Castillo, many were surprised that a fan favorite like Means, who always has entertaining fights, was cut from the roster.

As it turns out, there was more to the story. Tim explains, "Well, that was on me. I missed weight and I said I could do it so...The UFC and Joe Silva were really looking after my safety. And instead of waiting seven months for another fight, he (Silva) gave me the opportunity to go fight elsewhere and come back and he did exactly what he said he'd do."

Now a welterweight, Tim is happy that he can take fights on short notice without the stress of trying to make a grueling weight cut in half the time. "It just wasn't fun anymore having to be constantly on a diet all the time."

Welterweight has served him pretty well. Means was heading into his last fight against Matt Brown with a nice four-fight win streak. The two had a vicious, albeit brief, back-and-forth firefight, trading elbows when Means got caught with two elbows in rapid succession, rushed in for a takedown and right into a guillotine choke.

"I learned a lot. I feel like I beat his ass and there was an eye poke that changed things." he explains before making sure to acknowledge Brown's skill.  "He hit me with some hard shots. I hit him with a good elbow and I just stood there. I saw his eyes roll back but he took it and returned fire. So, yeah, I've been working on that. Drilling - hit and move, hit and move. I didn't win that night but I don't think my stock went down. (UFC President) Dana White wrote me a personal letter with an awesome bonus."

Which brings us to the latest challenge for Means, as he takes on his fellow UFC 189 card-mate John Howard this Thursday at UFC Fight Night: Namajunas vs VanZant on UFC FIGHT PASS. "The Dirty Bird" is confident that he's got the style to beat "Doomsday" and get back on the winning path.

"He's kind of lazy in a lot of ways." Means says. "With his style, he takes his time and he has lapses of inactivity and... I dunno if 'lazy' is the right word. I guess it's just his style, but he picks his shots and he's not a workhorse, that's for sure. And my strongest point is pushing the action and getting in people's face. So I'm just gonna make him get on his bike and have to keep my pace and try to break him that way."

As for what he's doing to prepare specifically for Howard, Tim says that neither he nor his coaches at FIT NHB in Albuquerque are big believers in game planning. Unlike that other gym in town – Jackson-Wink MMA - that is known for master game plans.

"Our coach Arlene [Sanchez-Vaughn] is against preparing for a specific fighter. Anything can pop up in a fight - you saw what Holly (Holm) did to Ronda (Rousey). Anything is possible, so we're just ready for him to throw everything and the kitchen sink at us."

When I ask about the future, Tim assures me that "John Howard is what's next," but beyond Thursday night and John Howard, Means sees himself staying involved with martial arts for a long time, even after hanging up his professional fighter gloves.

"We have the FIT teens program here, where we work with kids that have been bullied or kids that want to build self-confidence and just learn martial arts. It's pretty cool coaching and working with those kids. We have a handful of kids who came in and barely talked and smiled and now they're competing in grappling tournaments. It's pretty neat to see them change."

"I think if I'd had something like that to vent as a kid I don't think I would've gotten into that trouble. I'm happy that I can give back and help some of these kids that need something to do. I'm proud of those things. I worked my butt off and got away from the life that I was living and I'm just trying to learn to be a dad and an adult... pay my taxes and all that good stuff."

It's no "Breaking Bad," but it's a way better storyline for real life.