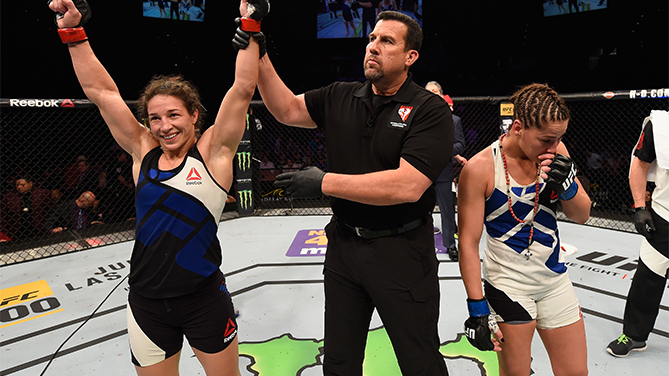 It wasn’t the most aesthetically pleasing bout, but Sara McMann will take the victory, as she shut out Jessica Eye over three rounds in a UFC Fight Night bout at the Mandalay Bay Events Center on Sunday.

Eye was able to stay upright in the first, as she kept the Olympic Silver medal-winning wrestler from taking the bout to the mat. McMann did some good work against the fence, scoring particularly well with her knees, but that was the extent of the compelling action in the round.

After more tentative action in the early going of round two, McMann got the fight to the mat with a little over two minutes to go and kept Eye there until the horn, wrapping up another round on the cards.

Eye finally got on the board consistently in the third with some good counters, but a McMann takedown put an end to that surge, and Eye had no answers to get back to her feet or back in the fight. 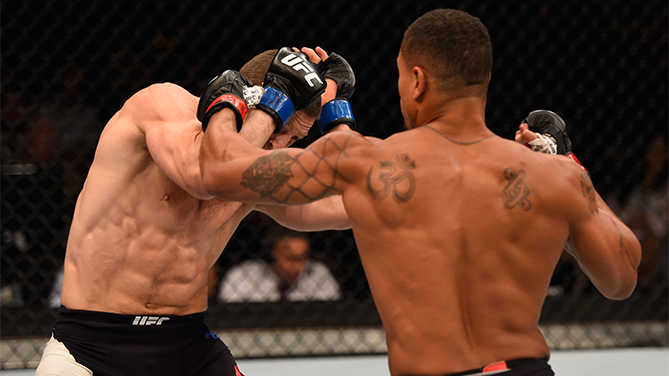 Lightweight up and comer Abel Trujillo weathered a spirited effort from late-notice newcomer Jordan Rinaldi to take a close, but unanimous, decision win, picking up his third straight victory in the process.

The first round was a competitive one, Trujillo doing some good ground work early and Rinaldi responding with some effective standup in the latter stages of the frame.

Trujillo got another takedown to start round two, but Rinaldi nearly sunk in an armbar, briefly putting the Floridian in trouble before “Killa” escaped and got back to his feet. Once standing, Rinaldi was the one looking for the takedown, and he immediately took his opponent’s back as the bout hit the mat. Trujillo survived the round, but not until he was on the short end of several dicey situations.

With the fight up for grabs in the final five minutes, Trujillo surged against the tiring Rinaldi, landing some hard strikes before a late takedown kept him in control and secured the victory. 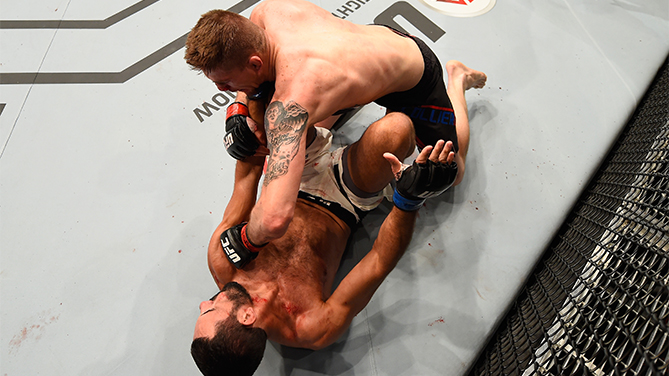 A knee to the nose while in the clinch immediately swung the early momentum in Uda’s direction, as it bloodied and staggered Collier. Collier battled his way back into the fight and got a takedown with under two minutes left, but in an ensuing scramble, Uda was able to regain control and keep it to the horn.

Round two was all Collier though, as he pressured Uda from the start and began tagging the Brazilian to the body. And it was a spinning back kick to the body that dropped and stopped Uda, with referee Jason Herzog stopping the bout at 1:06 of the second frame. 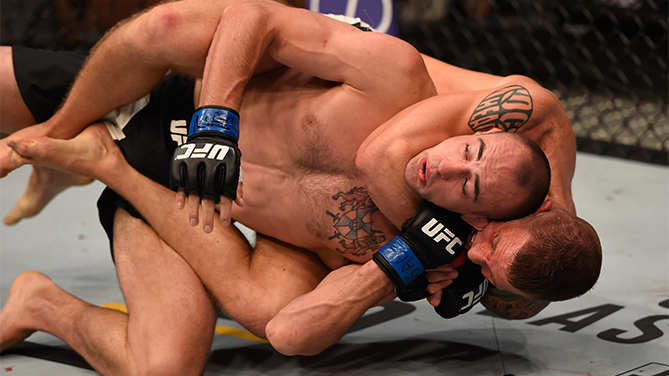 Fighting for the first time since May of 2014, Erik Koch reintroduced himself to the UFC faithful with a dominant second-round submission victory over Shane Campbell.

Koch showed no signs of ring rust as he drilled Campbell with combinations throughout the opening two minutes of the fight until Campbell decided to take his chances in the clinch. There, the Canadian was able to slow his opponent down and avoid any serious trouble for the rest of the round.

Campbell got his striking in gear to start round two, staggering Koch with an elbow and forcing the Milwaukee product to seek – and get – a takedown. Koch did good work on the mat as he looked for an arm triangle and then took Campbell’s back. Moments later, he locked in a rear naked choke, forcing Campbell to tap out at the 3:02 mark.

With the win, Koch moves to 15-4, earning his first win since a UFC 170 knockout of Rafaello Oliveira. Kelowna’s Campbell falls to 12-5.