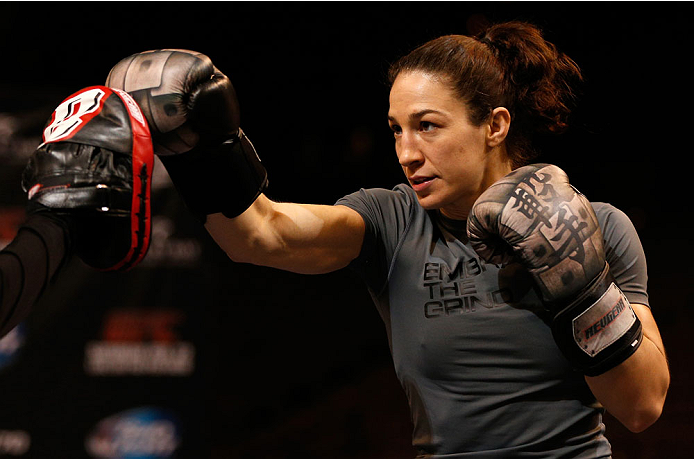 Calmer than most would be in the same situation, Sara McMann listened to her coaches’ advice between rounds one and two of her December fight with Alexis Davis and then had the final word on what was going to happen next.

“I can’t feel half my face, I’m taking her down,” McMann said, and she delivered on her promise, taking Davis to the mat and submitting her with an arm triangle that also earned the 2004 U.S. Olympic silver medalist a Performance of the Night bonus.

All of that, McMann owes to the toughness built in the wrestling room.

“I’ve had different points in my life where I’ve been really crushed. So I think, for me, it feels like if I can start where I started in life and go through all of the really difficult things that I have managed to go through and still reach where I’m reaching – the pinnacle of two different sports – it’s a good feeling." --Sara McMann

“I borrowed that from my wrestling mentality,” she said. “Nobody cares if you’re hurt. (Laughs) Wrestling is a very harsh world, and if you survive and thrive in it, it’s because you have a very tough mentality. We don’t make excuses. I’ve gone into tournaments really, really hurt and I’m like, ‘Sara, nobody cares if you’re hurt.’ The bottom line is, did you win the tournament, or didn’t you? It’s very direct. I’m not used to having any favoritism, luck or fortune on my side. It’s bottom line.”

So after taking some hard shots from Davis in the clash of bantamweight contenders, she didn’t look for the exit; she looked for her best chance to turn things around and win.

“Yeah, your face is numb, but you’re not hurt,” she said. “It might even be an advantage because you can’t feel anything. As long as you know you’re not bleeding from a huge gash on your face that could stop the fight, you need to just go and win and find a way. I don’t care what happens, I’ll deal with that later.”

The South Carolina bantamweight, who faces Gina Mazany on Sunday in Halifax, has been finding a way throughout her 36 years on this Earth. Whether on the mat, in the Octagon, or in life, McMann hasn’t been handed anything, and that’s never been an issue, because she’s willing to do what it takes to come out on top.

“I come from a really, really poor background and I’ve had a lot of different struggles,” she admits. “I’ve had different points in my life where I’ve been really crushed. So I think, for me, it feels like if I can start where I started in life and go through all of the really difficult things that I have managed to go through and still reach where I’m reaching – the pinnacle of two different sports – it’s a good feeling. And I can honestly look people in the eye when they’re going through hard times and say, ‘You can make it through this, and not only that, but you can still have your dreams.’ I’m not reciting some inspirational quote; I’m looking them in the eye as someone who’s done it.”

The silver medal in the 2004 Games was an example of what a will to win can do when added to talent and hard work. Now she is climbing that mountain once more in MMA, and it hasn’t been an easy road. That’s old news to someone like McMann, who says, “You really had better enjoy the journey.”

Given the grind of wrestling and its ability to break down the toughest of athletes, it has to be a tough thing to love, but McMann will add a qualifier to that.

“Wrestling is fun, but it isn’t like rollercoaster fun,” she laughs. “It’s enjoyable and it’s satisfying and you feel like you’re accomplishing something. You’re pushing yourself to your limits, and that’s how I know I’ve really lived.”

In MMA, McMann has won two straight over Jessica Eye and Davis, putting to rest a 1-3 stretch where she lost to three world champions in Ronda Rousey, Miesha Tate and Amanda Nunes. And it was with the win over Davis that it looked like everything was finally clicking. McMann agrees that she was on for the Davis bout, but she believes the transformation from wrestler fighting in MMA to MMA fighter really kicked in against Eye.

“I want to be champion, and I’ll do just about anything to get that,” she said. “I don’t care if I have to crawl on my belly over broken glass for a mile, I’ll do it.” --Sara McMann

“I felt really comfortable and I knew that I had a turning point in my career,” she said. “So training for Alexis and training for this fight, I just feel the things I had been hammering away at and drilling for years are coming more naturally and blending together better. I’m so excited for this next chapter of my career.”

It’s a chapter she expects to end with a world championship.

“I want to be champion, and I’ll do just about anything to get that,” she said. “I don’t care if I have to crawl on my belly over broken glass for a mile, I’ll do it.”