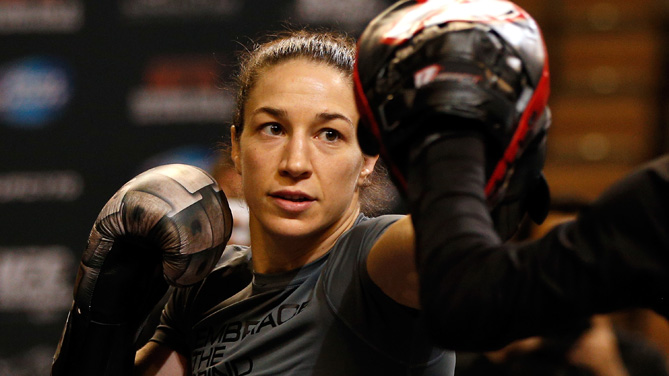 “THE” Sara McMann is trying to keep her cool, as her six-year-old daughter Bella practices an ear piercing squeal in the background, over and over and over again.

With the hardest part of her weight cut still a few days away, McMann manages.

“I struggle with keeping a nice, sweet sun-shiny voice around my daughter,” McMann says. “She does things a typical six-year-old will do, like she will make that same annoying noise over and over and over again just because she thinks it’s funny, and I really have to take a deep breath and try not to lose my s**t.” 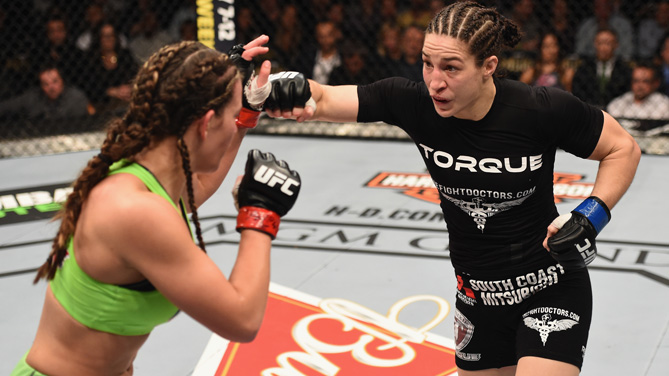 Miesha Tate in their women's bantamweight bout during the UFC 183 event at the MGM Grand Garden Arena on January 31, 2015 in Las Vegas, Nevada. (Photo by Josh Hedges/Zuffa LLC/Zuffa LLC via Getty Images)" align="right" />Bella is the love of McMann’s life, and the reason every few months she dons a pair of four-ounce gloves, sets out in front of millions of people on television and plies her trade inside the UFC’s Octagon.

“I’m never going to be upset with my little girl for being a little girl, but when you’re in training and cutting weight and exhausted, it is very trying sometimes. It sounds stupid, but the last person in the world I want to snap at is my daughter. I will snap at people on the road but it’s not something she deserves,” she said.

A Silver medalist in the 2004 Olympics’ women’s freestyle wrestling competition, Sara has been training at an elite level for as long as she can remember, so she knows what she needs in order to keep her focus. There needs to be a certain amount of selfishness for athletes to perform at the elite level.

When one is a single mother however, there is hardly room for selfish. But again, McMann manages.

“My daughter doesn’t come with me the first part of fight week,” she said. “When I’m cutting weight I need to be selfish. I don’t view it as a bad thing. It’s a really critical time. Every athlete needs certain things, especially when everyone’s skillset is nearly the same, so the six inches between your ears makes all the difference come fight night. The mental part of fight week is critical for me, and I need to do well in my career because this is how I support my daughter and myself. It is not selfish to do the right things for one’s family.”

Nunes is a tough opponent for any fighter, but having faced the division’s number one and number two fighters in champion Ronda Rousey and challenger Miesha Tate in two of her last three fights, there’s not much McMann isn’t prepared for.

In fact, McMann says this camp has been one of the best in her career.

“Camp is going extremely good,” she said. “My last fight my camp was not very good. Things come up and as a professional athlete you have to deal with things, but that’s the thing about being a fighter. Things tend to happen in training. My last fight I really couldn’t work my top or bottom game for a reason, but things are fine now and I’m really prepared.”

McMann says Nunes’ biggest weapon is her heart. Nunes would argue it’s her overhand right. With nine KOs on her resume, many people at American Top Team believe Nunes is the most powerful striker in the division, but that’s fine with McMann. No matter who the UFC puts in front of her, she’ll manage.

“I wouldn’t have it any other way,” she says. “Almost all the girls are tough and I kind of like that. If I have an opponent that I don’t take as serious as a threat, I find myself less motivated. I have to find a particular aspect of their game that I believe they’re good at, so then I have something to focus on in training. You know, for me, it’s the chess game that I love. It’s the process more than the outcome.”

Sara says the double-edged sword of being a female fighter is the lack of women to train with. Most of her partners are men, something she’s been used to from her life as an Olympic wrestler, but she says she’s got a secret weapon: UFC flyweight Justin Scoggins.

“He has the uncanny ability to imitate any fighter he studies, and he did a really good job in emulating Amanda for me,” she said. “And he’s been doing striking since he was five years old. I’m lucky I have a great team who all support me in their own way. I’m super-fortunate.” 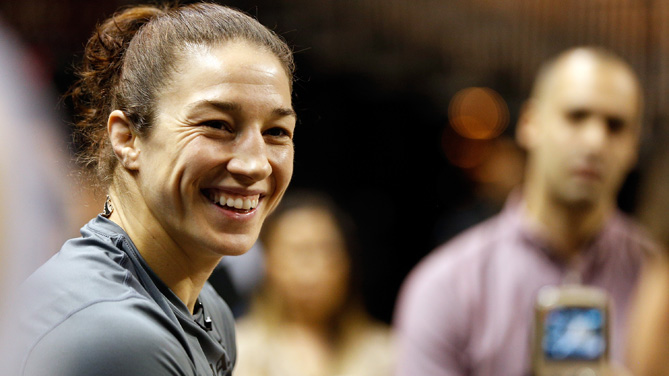 McMann endured some criticism after her title fight with Rousey, when Rousey called into question her commitment to the prize for being, of all things, media shy. Rousey might have been off where it pertained to McMann’s heart, however, she wasn’t too far off pertaining to McMann’s desire for privacy.

But Sara says her outlook on the out-of-ring game that pervades the sport has changed dramatically.

“In the beginning I didn’t really understand the theatrics,” she explains. “For instance, in wrestling, we just step on a scale and then go about our business. In MMA there’s a stage, there’s introductions, an audience, a staredown, there’s music. That took me a while to get used to. I also have come to appreciate the drama and the storylines in MMA. It’s kind of like a soap opera. People want to see how two people are going to react in a staredown or at a press conference if there’s drama between them. People want to watch a fight that has some context and some history and nuance underneath it. I love that part of the sport now, where before I thought it was fake. I’ve come to understand that it really helps fans become invested and pull for someone wholeheartedly.”

The fans do pull for McMann. She says she appreciates the respect she gets from fans who are otherwise crude toward other women on the roster as well.

“I don’t get the crass comments like some of my peers,” she says. “Instead of getting ‘hey I want to sleep with you,’ I’m getting comments like ‘I want to marry you.’ I think its sweet but I also believe I’ve earned that respect. I don’t go out of my way to say things just to make headlines or be controversial. I may be poorer because of it, but I’m happier. I want my daughter to be able to read articles or watch interviews and know that I was always true to myself.”

An impressive win against Nunes will put McMann right back into the title picture, and depending on where the chips fall in the division, it would not be so far-fetched if we saw her take on the winner of the Rousey-Tate trilogy title match.

Somehow, no matter who wins, McMann will manage.

“There’s nothing more satisfying to me than avenging losses,” she says. “I want to fight Miesha and I want to fight Ronda. I want to come back and show the world what I’m made of.”
>UFC FIGHT NIGHT: TEIXEIRA VS. SAINT PREUX, 10PM/7PM ETPT