McMann Creates Her Own Expectations

“For me, I haven’t ever really listened to anyone else’s expectations all along."
By E. Spencer Kyte, on Twitter @SpencerKyte • Jan. 22, 2020

Just a handful of days before stepping into the Octagon for the first time in nearly two years, Sara McMann is excited — like genuinely excited — which is not how she usually feels ahead of making the walk to the UFC cage.

“Most of my fights, I’m excited, but it’s more in a stressful way; it’s like a big moment way,” said McMann who faces Lina Lansberg Saturday night at PNC Arena in Raleigh, North Carolina, marking her first appearance since a second-round submission loss to Marion Reneau in February 2018. “This is the first time in a while I’ve been excited-excited; I don’t know how else to describe it.

“I just feel so grateful that my body has been feeling good,” continued the Olympic silver medalist, who pressed pause on her career to give birth to a baby boy, and then was delayed in returning last summer when an injury forced her out of a proposed matchup with Nicco Montano. “I’ve been so eager to be back that I can’t wait for the fight to get here, where normally I’m in almost business-mode about all the things I have to do.”

Some might see McMann’s burgeoning giddiness as a reaction to being in a low-stress position for the first time in her mixed martial arts career.

After transitioning to the sport following an exceptional career on the wrestling mats, she was ticketed as a future contender and potential threat to then UFC bantamweight queen Ronda Rousey before even arriving in the UFC. A handful of wins on the regional circuit over quality names raised the expectations and a strong showing in her promotional debut upped the ante even further, launching McMann into a championship showdown with her fellow Olympic medalist in her second fight in the UFC. 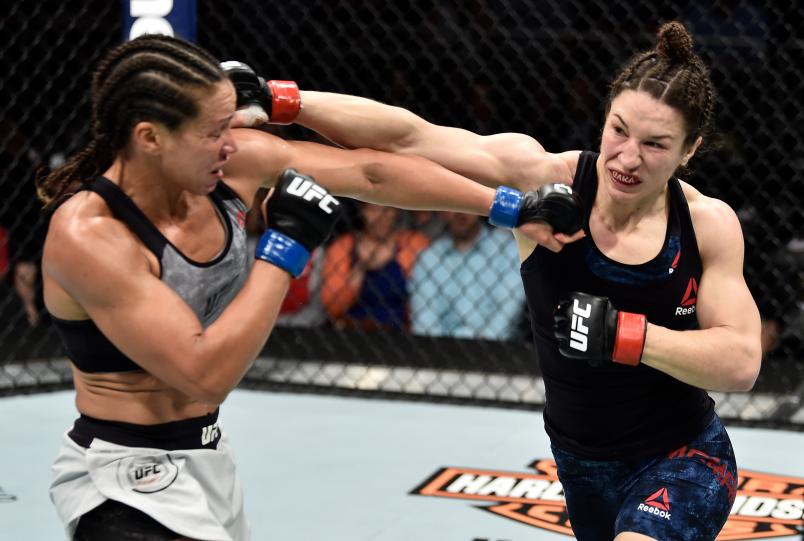 MORE FROM UFC RALEIGH: Fight by Fight Preview | Fighters On The Rise | Hill Reaching Her Peak

It ended quickly, with Rousey felling McMann with a knee to the body, but wasn’t seen as an indictment of her skills. Everyone was losing to Rousey at the time and McMann was still developing, so with a few more fights and a little more seasoning, she’d be right back in the mix. Over the next four years, there were moments where she looked tantalizingly close to becoming the fighter observers projected her to become, and others where she continued to struggle.

A three-fight winning streak that included back-to-back submission wins felt like a harbinger that another run at the title was right around the corner, only to be followed by the consecutive losses that carry McMann into this weekend’s preliminary card fight with Lansberg.

“For me, I haven’t ever really listened to anyone else’s expectations all along,” said McMann, shooting down any talk that she’s feeling more at ease because she’s out of the championship mix at the moment. “I’ve always had my own expectations, but I’ve tried to stay focused on what’s in front of me because you can go off and ponder and speculate, but you really don’t know the path you’re going to weave in MMA. It’s not like a tournament where I can look at a bracket and map things out; it’s all over the place in MMA.

“I’m just not one of those athletes that comes out and it’s a clean sweep. In all my years of wrestling, I could get third place in a tournament throughout the year or lose an individual match to a person I usually beat. I have never been that kind of perfect athlete; I’m human!

“For me, my MMA career has been the same,” she added. “I’ve done well sometimes and sometimes I haven’t had the performance that I wanted and it could be the matchup or sometimes it’s injuries and sometimes you just get the short end of the deal in that particular fight.”

As with everything in her competitive, professional life, it all traces back to wrestling with the 39-year-old McMann, who said she entered “a jiu-jitsu tournament” last month to see how her body felt in advance of her to the cage this weekend.

That “jiu-jitsu tournament” was the No Gi World Championships. She finished second in her weight class.

“In wrestling, we accept that people can have fluctuations and it’s like, ‘Next tournament, they’ll turn it around’ and we meet up with each other several times a year and we’re facing our nemesis in the semis and the finals over and over,” she said, pondering the fascination mixed martial arts and boxing seems to have with undefeated fighters and each sport’s propensity for devaluing athletes once they suffer a loss, which runs in stark contrast to the realities of competition.

“Look at every one of the champions: most of them have some losses; most of the best fighters in history have losses,” she added. “My record would have been great if I wasn’t going against anybody who was worthy, but if I showed up at a tournament and a world champion turned up in my weight class, I had to beat her if I wanted to win it.

“If the UFC lined up girls where I was way ahead of their league, I would look like the best fighter ever, but I’ve predominantly taken really tough fights and that’s okay with me.”

She’s continuing down that difficult road this weekend by stepping into the cage with Lansberg.

The Swedish veteran, who made her promotional debut in a 140-pound catchweight bout against Cris Cyborg, enters Saturday’s contest in the best form of her UFC career, having earned back-to-back victories over Tonya Evinger and Macy Chiasson in 2019 to push her record to 10-4 overall.

The Muay Thai stylist, nicknamed “Elbow Queen,” is the type of battle-tested, tough out who can derail the plans of emerging talents, like she did to Chiasson in September, and will bring the fight to McMann, giving the returning grappler a clear picture of where she stands within the bantamweight ranks come Sunday morning.

“I think it’s a good fight to come back with because it’s not getting thrown back in there with a title contender, right back in the mix with the heavy hitters,” she said. “She’s had a couple wins, she’s tough, she’s beaten good girls and it’s a good fight for me in terms of coming back and getting back into things.” 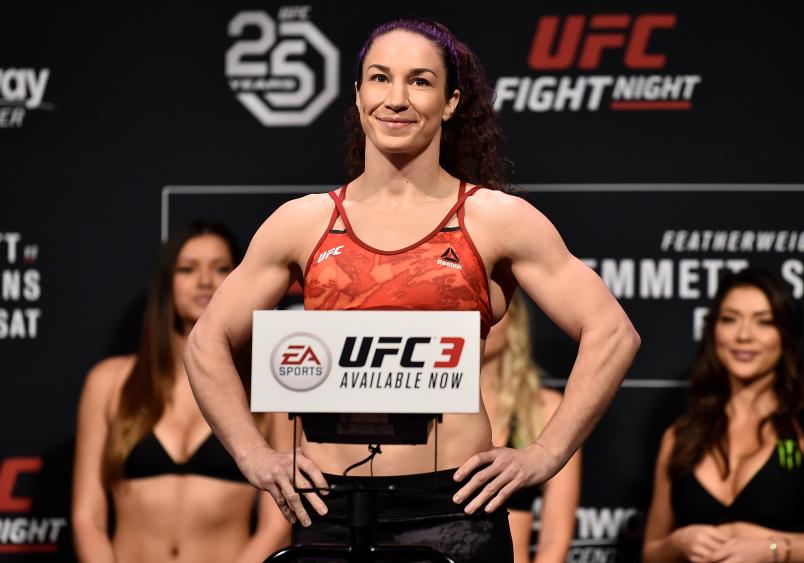 That admission may catch some people off guard — and could very well serve as “bulletin board material” for Lansberg.

But just as she’s realistic about her record and progress as a fighter, McMann also wants to make sure she’s giving herself the best chance to succeed possible, and if that means not diving straight into the deepest end of the bantamweight talent pool, then that’s what she’s going to do.

“I’ve seen really great wrestlers — world champions and Olympic-caliber competitors — go out, have a surgery and come back and lose to people I know they’re better than,” explained McMann. “After a couple tournaments, they’re back in prime condition, but you just can’t — when the stakes are real high and you only get one chance to fight someone, I think it’s smarter to say, ‘If my timing is slightly off, I still feel confident that I’m going to beat this person.’

“That’s smarter to me,” she added. “After this, once I’ve shown myself that I can beat someone who is ranked and on a two-fight winning streak, I’m good with whomever you want me to face, but I’ve seen it where people jumped into the deep end a little too quickly.”

And she doesn’t want to be one of those people.

Not after nearly two years away.

Not when her body is feeling as good as it has in years.

Not when she’s genuinely excited to step into the Octagon.

Not when she’s this close to finally getting to experience that exhilarating rush that comes with standing in the center of the Octagon, knowing you’ve won.

“That rush, that feeling is one of the best feelings in the world,” she said. “That is more incentive than anything else and that’s what I’m killing myself to feel again.”