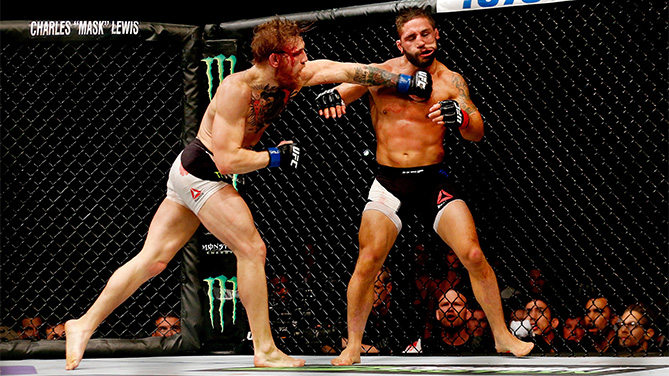 Conor McGregor was bloodied and on his back, but he rallied spectacularly in the second round Saturday night to score a technical knockout of Chad Mendes at UFC 189 for the interim featherweight title.

At the end of the night, the two fighters, who had taunted each other for the past two weeks, shared a hug in the center of the Octagon. McGregor, overcome by emotion, fell to his knees and hugged an Irish flag.

McGregor (18-2) was clearly losing until he was able to scramble to his feet and use his punching power to slow Mendes, who was using punches and elbows to control the round. McGregor set up the finish with a right jab and a crossing left hand that dropped Mendes (17-3) near the fence.

When Mendes covered up, McGregor threw several more punches before referee Herb Dean stopped the fight at the 4 minute, 57 second mark of the second round.

There was no first-round knockdown as McGregor had predicted. In fact, it was a round that belonged to Mendes, who scored on three takedowns and landed a sharp punch early in the round that cut McGregor on the corner of his right eye.

McGregor did land some effective kicks and jolted Mendes a couple of times with punches, but he spent time on his back as well.

The bout was marked by dueling singers serenading each fighter: Sinead O’Connor for McGregor and Aaron Lewis for Mendes.