One glance over the new official UFC rankings and it’s hard to miss new two-weight world champion Conor McGregor’s name, which is plastered across the top of three different lists.

McGregor holds the champion slot in both the lightweight and featherweight divisions and now ranks No. 2 behind only flyweight king Demetrious Johnson on the pound-for-pound list.

“The Notorious” received five first-place votes (out of 19 total voters) but the panel consensus had “Mighty Mouse” remain at the top spot.

McGregor thinks he is now the number one fighter and he made his case to UFC correspondent Megan Olivi before his KO of Eddie Alvarez.

The first win at 155 pounds for McGregor at UFC 205 gives him wins at featherweight, lightweight and welterweight in the UFC.

“I feel good at all (weight classes). I’m dominating the featherweight division and I’m dominating 155 now, you know what I’m saying?” McGregor said. “I have no problem going to 170. I’ve been sizing them up and they’re not on my level either.”

McGregor passed Dominick Cruz and Daniel Cormier, who drop to three and four respectively on the pound-for-pound list. Alvarez drops completely from the pound-for-pound ranks, allowing Joanna Jedrzejczyk (No. 7), Tyron Woodley (No. 8), Michael Bisping (No. 9) and Cris Cyborg (No. 10) all to jump ahead in the ranks. Cyborg made the biggest jump into the top 10 with a four-position rise. 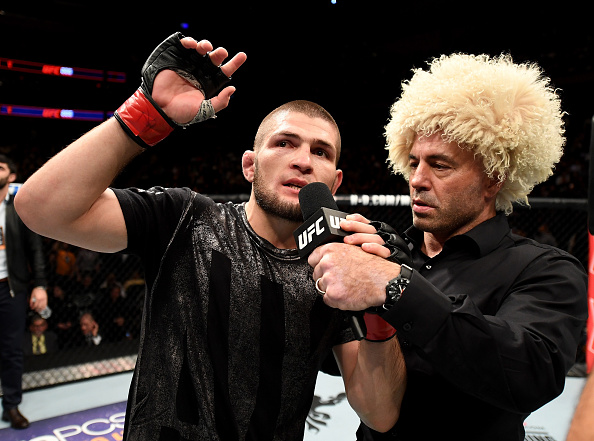 In the lightweight division, McGregor’s new place as champion drops the entire division down a spot, except for UFC 205 winner Khabib Nurmagomedov, who beat No. 7-ranked Michael Johnson and jumped up to the No. 1 spot past Tony Ferguson. “El Cucuy” just secured the top position after a win against former champion Rafael Dos Anjos, but Nurmagomedov’s convincing finish win allowed him to pull ahead back into the No. 1 spot.

In the welterweight division, Stephen Thompson moved to the No. 1 spot after his majority draw against Woodley in the co-main event.

“Wonderboy” passed former champion Robbie Lawler, who was knocked out by Woodley at UFC 201.

Kelvin Gastelum missed weight and was unable to compete at UFC 205. He suffered a three-spot drop in the rankings as a result. Donald Cerrone (No. 5), Johny Hendricks (No. 6) and Lorenz Larkin (No. 7) all jumped one spot past Gastelum.

Miesha Tate may be retired but she remained in the top 10 of the rankings, holding the No. 10 position after a nine-spot drop. Raquel Pennington rounds out the new-look top five behind No. 1 Ronda Rousey, No. 2 Valentina Shevchenko, No. 3 Julianna Pena and No. 4 Holly Holm.

Finally, in the middleweight division, Yoel Romero, fresh off his KO win against Chris Weidman, jumps three spot into the No. 1 position at 185 pounds. Weidman falls two spots down to No. 4 behind No. 2-ranked Luke Rockhold and No. 3-ranked Jacare Souza.

Tim Boetsch returned to the rankings at No. 14 after his KO win at UFC 205.