The first extended preview for UFC 205 has been released, featuring the much-anticipated lightweight title main event as widely expected.

It’s fitting that it’s McGregor -- arguably the biggest star in the UFC today -- trying to make history at the historic first UFC event in New York at the legendary Madison Square Garden.

But for the featherweight king, it’s just another day in the life.

“They’re focusing on me and I’m focusing on history. I’m always looking to make history every single day and here we are again – more history,” McGregor said in the UFC 205 extended preview live now on UFC.com and YouTube. “I’m going to introduce Madison Square Garden to this style: true, pure combat.”

Alvarez isn’t impressed with McGregor’s credentials, nor does the 155-pound champ believe the Irishman’s ability to command the microphone will be helpful when the two finally collide.

“Conor’s full of sh*t. Most of the things he’s said are full of sh*t,” Alvarez said. “He’s never put himself in harm’s way. And I think, just now, he has.

“I want to get my hands on him so I can expose the truth of who’s the best man. The truth will be told. It’ll be high-paced and it will be violent. On Nov. 12 the illusion of greatness will be over.” 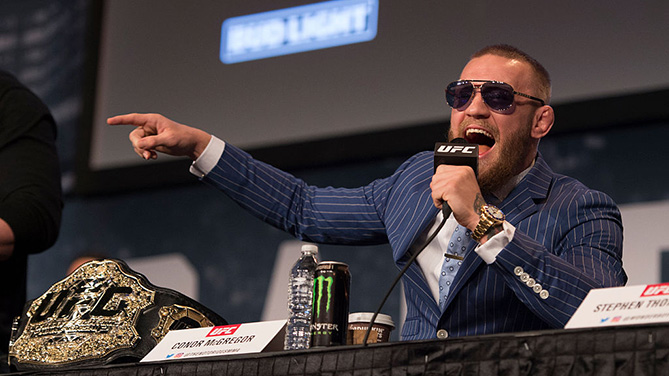 McGregor considers himself as the only man or woman in the sport capable of pulling off the impossible: holding two world belts in the UFC at the same time. He said Alvarez is in for a bad night at UFC 205.

"You think one thing’s gonna happen and then a whole other thing happens,” McGregor said. “That’s what’s going to happen to Eddie. My fist is just going to break his whole face and that’s it. It’s over before it even begins.”

Don’t miss McGregor and Alvarez on Thursday, Nov. 3 at 5 p.m. ET/2 p.m. PT in the UFC 205 official media conference call. The entire call will be streamed on UFC.com and on YouTube, part of an exciting week that will only get more heated as we near the night of UFC 205.

Tickets are on sale now for UFC 205 but they’re almost gone. Go to ufc.com/tickets now to make sure you are a part of history.