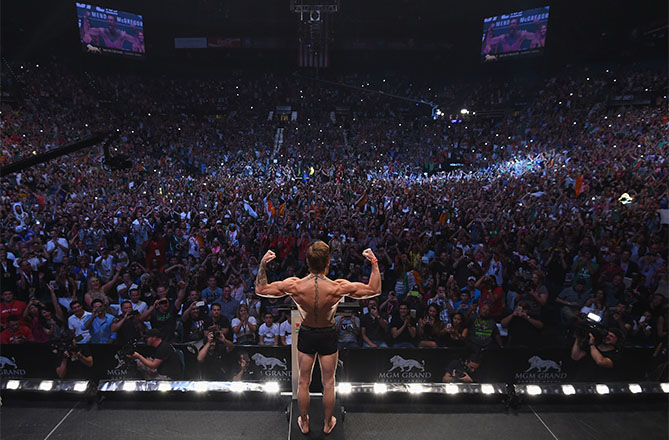 The weigh-ins for UFC 189 Saturday night almost turned into the main event.

Chad Mendes and Conor McGregor stepped on the scale at the MGM Grand Garden Arena on Friday afternoon and then looked determined to trade punches.

If they had, it surely would have pleased a rowdy, raucous turnout that UFC officials estimated at 11,500, breaking the UFC record for a weigh-in. The arena was virtually at capacity when fire marshals finally closed the doors.

Pro-McGregor fans danced, drank, sang, cheered and waved their Irish flags – and that was before the weigh-ins began. Fighters didn’t step on the scale until 4 p.m., but fans began filling seats around 2:30. And the party was on.

They waited patiently for the entire card to weigh in, but the place exploded when McGregor, draped in an Irish flag, finally stepped on the stage. After Mendes came out and was weighed, he walked quickly and deliberately toward McGregor before UFC president Dana White stepped forward and kept them apart.

Mendes clapped and flexed toward the crowed, and there were a few inaudible taunts before McGregor pointed at Mendes and shouted. In an on-stage interview with UFC announcer Joe Rogan, McGregor called Mendes “an overblown midget,” then added, “Tomorrow night, I’m going to cut him in half and raise the gold for Ireland.” 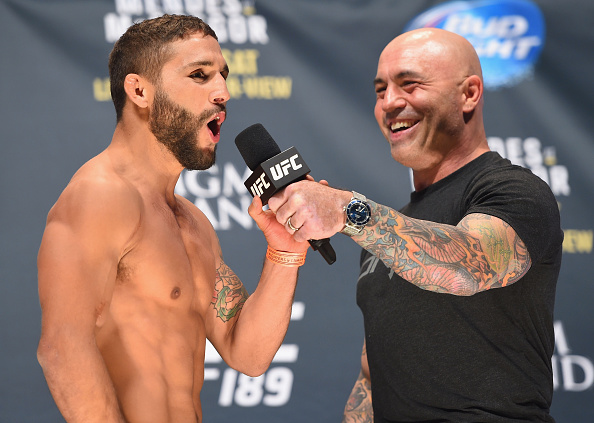 That brought more deafening cheers, but the scene almost turned ugly when an object was thrown at Mendes as he and McGregor were escorted off stage.

For the record, McGregor weighed the featherweight limit of 145 pounds. Mendes was 144½. In the co-main event, welterweight champion Robbie Lawler weighed 169½; challenger Rory MacDonald was 170.

The scheduled five-rounder between McGregor and Mendes for the UFC interim featherweight title will culminate a long journey for McGregor, who was originally supposed to fight champion Jose Aldo. That bout was scrapped because of a rib injury to Aldo, giving Mendes a shot.

Mendes had only a couple of weeks to prepare, but he insisted he was in fighting shape and had no trouble making weight. 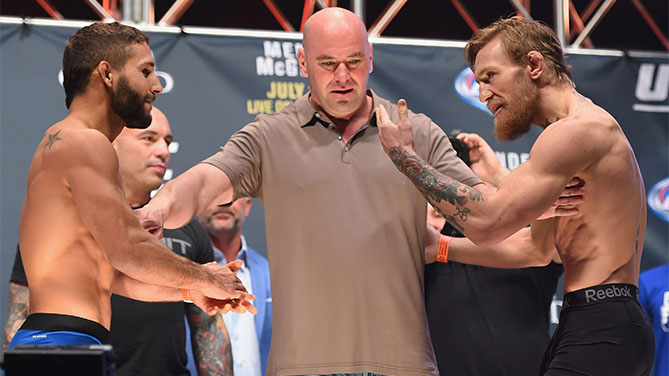 Their exchange on Friday continued the verbal sparring that has punctuated McGregor fights. He belittled Aldo throughout their world tour and picked up the pace when Mendes stepped in.

If the weigh-in was any indication, UFC 189 will be memorable once they step inside the Octagon. McGregor has promised to finish his opponent in the first round; Mendes’ distaste for McGregor goes back to last year.

The only person smiling on Friday was White. After he walked onto the stage and took a look at the rollicking crowd, he said, “Awesome. Awesome.”