McGregor, Mendes Ready To Face Off, Square Off At Weigh-ins

UFC fans, head to your nearest Wingstop now & pick up your UFC 30-pack before UFC189! Enter in-store for a guaranteed online PPV discount code and the chance to win a trip to UFC195! 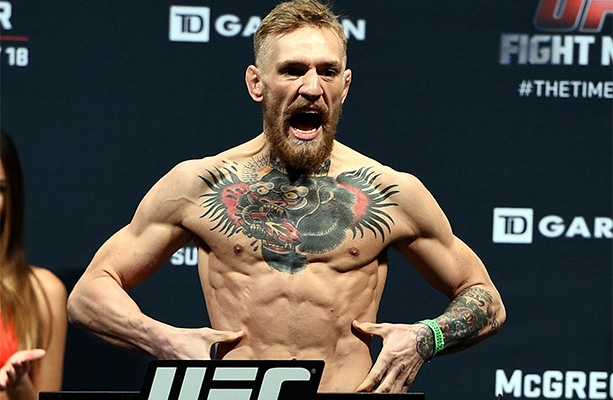 The main event is more than 24 hours away, but that is not going to stop the Irish Invasion from descending on the MGM Grand Garden Arena today.

The weigh-ins for UFC 189 (7pm/4pm ETPT), headlined by Conor McGregor and Chad Mendes fighting for the interim featherweight title, are expected to draw close to 10,000 fans – most of them flag-waving, nationalistic Irish fans ready for a good time.

This is a weigh-in -- and a face off -- not to be missed, given the simmering hostility between McGregor and Mendes, and the expectation that you never know what “The Notorious” may say, or do.

McGregor’s Irish supporters have been converging on Las Vegas all week, and although there have been public workouts and press conferences to satisfy their appetites for a glimpse of McGregor, the weigh-in figures to give them one last opportunity to cheer their hero.

“I expect 10,000 screaming Irish fans inside that MGM for the weigh-in,” McGregor said. “It’s going to be a phenomenal weekend for the Irish, for the UFC and for myself. I am looking forward to it, and I’ll relish every moment of it.”

Most UFC weigh-ins draw between 3,000-5,000 fans, but with so many McGregor supporters in town, officials are expecting close to 10,000. Saturday’s card will draw more than 16,000, with bleachers being added to an already sold-out arena.

McGregor (17-2) said he expects today’s turnout to be the most attended weigh-ins in UFC history. He takes credit for most of it – and for the anticipated $7.1-million live gate.

“All of these accolades fill me with pride,” he said. “I’m looking to go in there and represent my nation and fight with pride. I’m going to slap the face off (Mendes), and that’s it.”

McGregor’s original opponent, featherweight champion Jose Aldo, withdrew because of a rib injury, but McGregor insisted he didn’t consider waiting until Aldo was fit to fight. He accepted a fight with Mendes (17-2) for the interim title. 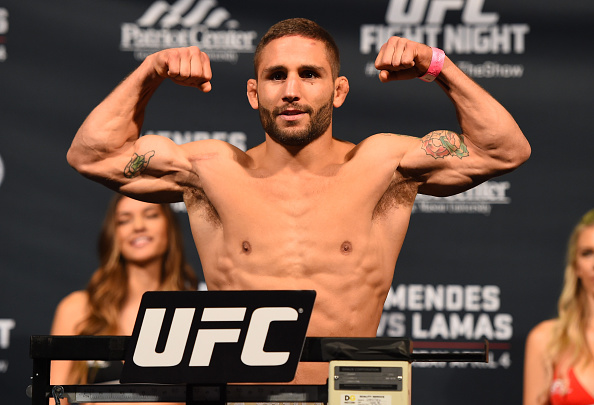 His decision to remain on the card despite the loss of Aldo came, in part, because so many Irish fans had already made plans to attend, McGregor said.

“To make the trip from my hometown of Dublin to Las Vegas is a once-in-a-lifetime trip for a lot of people. It takes a lot of sacrifice,” he said. “Of course I was going to show up regardless of who was across from me. I am happy to be here and represent my country on this stage.”
McGregor’s furious drum beating about the fight has hardly subsided, despite the fact Mendes will be across the Octagon on Saturday. He has called his opponent “mini-Mendes,” a “twerp” and a “bantamweight,” among other things.

Mendes said he appreciated the fact he didn’t have to endure months of belittling, as Aldo did.

“He’s a black belt in trash talking,” Mendes said. “This has been a fun ride going through all this, but this is a fight where you throw out all that hype and trash talk. It’s going to be an easy fight. I’m going in this focused. I know what I have to do.” 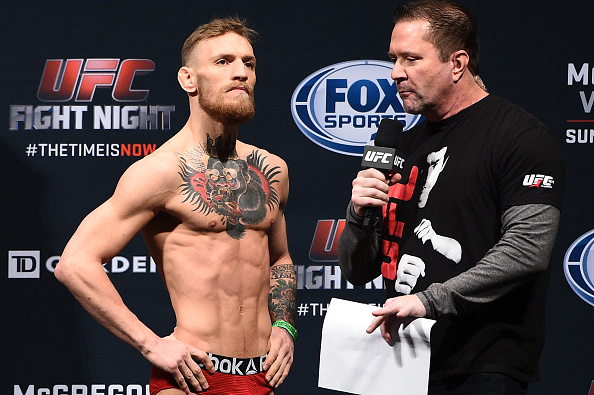 Mendes isn’t getting the benefit of being an American fighting in America. There will be far more fans from Ireland than from Sacramento, where Mendes lives and trains. That much has been evident this week, when McGregor fans have booed him continually.

It will undoubtedly happen again at today’s weigh-ins when the fighters step on the scale before staring down in the traditional pre-fight face off with UFC president Dana White.

The unpredictable McGregor said he has nothing special planned when he stands face to face with Mendes. But you never know.