Conor McGregor said Tuesday he was taken aback a bit by the format of the first press conference in Los Angeles to announce his Aug. 26 fight with Floyd Mayweather.

By Wednesday at Budweiser Stage in Toronto, the UFC lightweight champion was more than warmed up, and before a packed house that cheered his every move, McGregor stalked the stage in an atmosphere more fitting for a Sunday revival than a press conference.

Once he got the microphone, no one was safe, let alone Mayweather. From Showtime Sports boss Stephen Espinoza to Rob Kardashian and the entire sport of boxing, McGregor let loose, leading the crowd in chants while daring Mayweather to take the mic from him in the process. 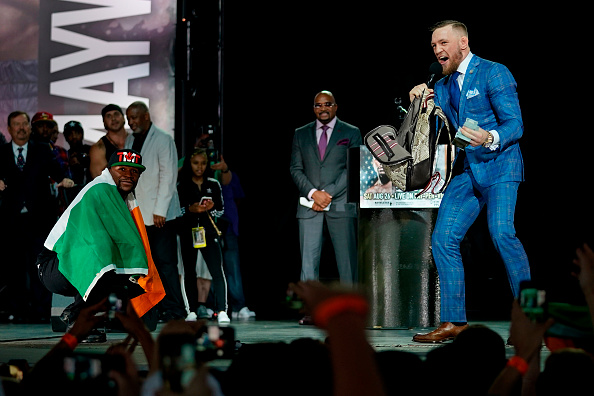 The Irishman did have plenty of love for Toronto and one of its favorite sons, hip hop superstar Drake, who was in attendance Wednesday.

“I came here to witness history,” Drake aid of what he called, “The biggest fight in the history of fighting.”

“Started from the bottom now I’m here,” McGregor said, smiling and recalling the last time he was in the city for a stop on the World Tour to promote his bout with Jose Aldo.

“They said the same things then that they’re saying now,” McGregor added. “I had no chance, I’m in over my head, too many weapons. It took me 13 seconds.”

The crowd erupted in cheers, and then switched to boos as Mayweather took the microphone. But the future Boxing Hall of Famer wasn’t rattled by the reaction, and after pacing in front of his future opponent, he blurted, “One thing we do know… the fans can’t fight for you.”
MORE FROM MAY-MAC WORLD TOUR: McGregor and Mayweather Sr. exchange words backstage | Day 1 in L.A. starts with pointed jabs | Watch the replay here | May-Mac talk trash at faceoff | Dana White's Video Blog

From there, Mayweather fired back at the Dubliner with the same venom he had just received, daring McGregor to put his money where his mouth is in August.

“If you believe in yourself like you say you do, bet your whole fight check,” Mayweather said.

“You got the nerve to believe in a fighter that quits,” the Las Vega resident said to the crowd. “I don’t quit, I don’t fold under pressure. I’m the best.

The World Tour is halfway done. Now the pair make its way to Brooklyn.