After two days of back and forth insults between Conor McGregor and Floyd Mayweather, it was inevitable that tensions would rise to the point where an altercation would happen. And while that altercation wasn’t between the two combatants scheduled to fight on Aug. 26, each camp came perilously close to clashing on stage in front of 13,165 fans at Barclays Center in Brooklyn on Thursday, shortly after Mayweather threw a bag full of money at the UFC lightweight champion and to the crowd.

Cooler heads prevailed, and as McGregor pointed out while addressing the press after the third stop of the Mayweather vs. McGregor World Tour, “We’ll keep it professional for now.”

Following dates in Los Angeles and Toronto, it’s clear that the two combat superstars are quite comfortable with each other at this point in the promotion of their Las Vegas showdown at T-Mobile Arena, even if they aren’t likely to be trading Christmas cards in December. That comfort means that each fighter knows how to get under the skin of the other. 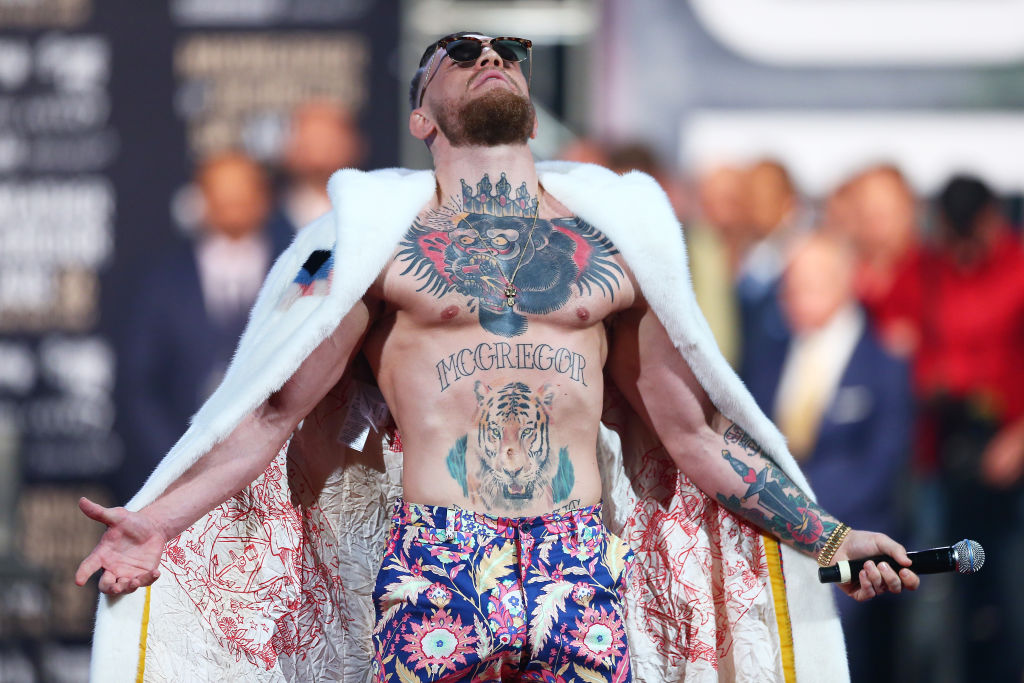 Tuesday and Wednesday, it was McGregor who hit Mayweather with several jabs at his financial situation and disbelief that the future Hall of Famer can knock him out, among other things. But on Thursday, the Las Vegas resident fired back with barbs about McGregor’s three MMA losses, all of which came via submission.

McGregor looked to be annoyed by the whole sequence, but that doesn’t mean the Irishman was unarmed in this battle of wits, as he gave Mayweather a copy the new Jay-Z album with some instructions:

“Build and maintain a real empire, not a fake empire,” said McGregor, who showed up with no shirt and a Joe Frazier-style fur coat as he took the stage and gave a tribute to Brooklyn’s Notorious B.I.G.

That got a roar from the crowd, but Mayweather had more than his share of support, leading McGregor to call Thursday’s meeting a draw.

“Or maybe I’m just being generous,” he said, laughing.

Tomorrow, the tour concludes in London.