McGregor happy to be back into 'his kind of game'

In 1993, Michael Jordan left the NBA at the height of his powers, played a season of minor league baseball, then returned to the Chicago Bulls to add three more titles to the three he had already won in the Windy City.

Conor McGregor “only” had two UFC titles when he took a hiatus to box Floyd Mayweather last year, but as he prepares for a Saturday return against Khabib Nurmagomedov that could put lightweight gold around his waist once more, the feelings of returning to something familiar are similar.

“It was an experience to go into a completely different game,” McGregor told Megan Olivi on UFC FIGHT PASS’ The Exchange. “New media, new people, new fans, new questions – just a new experience. And anytime you put yourself into an uncomfortable situation, you will grow as a person. That’s what happened to me. I put myself out there, put myself into an uncomfortable situation, a situation I’m not as familiar with, and that’s it. Now, here I am back into my kind of game, and it’s good to be back.”

Jordan hit .202 for the Birmingham Barons. McGregor was stopped in ten rounds by Mayweather. When Jordan returned to his comfort zone, he was as great as he always was, barely skipping a beat. Now it’s McGregor’s turn, and while he may be in with his toughest test to date in the 26-0 Nurmagomedov, the Irishman seems unbothered by the challenge, the hype, or the expectations.

“I missed the sport, I missed competing, it’s good to be back now, we’re close to another contest and I’m very, very excited, very happy that I’m coming to the end of a lot of hard work,” said McGregor, who will make his first MMA start since stopping Eddie Alvarez in November 2016.

The win over Alvarez made McGregor the first fighter to hold two UFC titles simultaneously and, at the time, the hope was that “The Notorious” one would face off with either Nurmagomedov or Tony Ferguson. That didn’t happen then, but even as he went off to make his pro boxing debut, McGregor didn’t lose sight of an eventual meeting with Nurmagomedov.

“I was excited about competing against him (Nurmagomedov), more so than Tony,” said McGregor. “I know Tony had an interim title also, but I was a lot more excited about this contest with an unbeaten fighter. I’m not really impressed that much by his record. It’s a pretty looking record, but if you dig deep, it’s not that pretty. I think it’s very deceiving. Everyone seems to put him on a pedestal, and I don’t see it. He’s a bit timid when it comes to taking a shot; he does not like to take a smack. And if you don’t like to take a smack when you fight me, you’re in for a long, long night.” 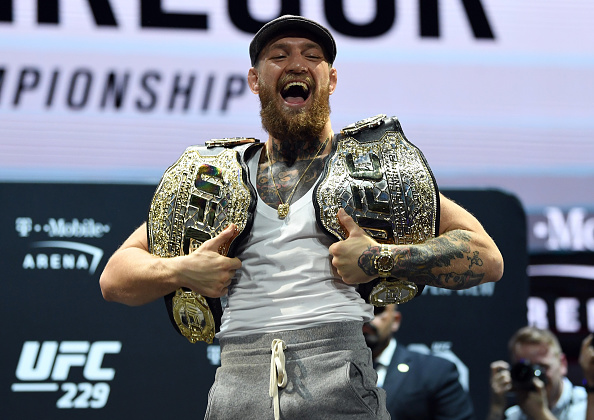 A loss to Mayweather has not dulled McGregor’s confidence, but then again, neither did his 2016 loss to Nate Diaz, one avenged five months later. Three months after that bout, he added the 155-pound title to the 145-pound one he took from Jose Aldo, and if that string proved anything, it’s that no matter the outcome, for the 30-year-old Dubliner, the fight’s the thing.
PRE-ORDER UFC 229 HERE

“Competing under those bright lights is the true test of your character,” he said.

It’s a more reflective McGregor, but there is still a fight to sell, and he’s been in “Notorious” form ever since the first UFC 229 press conference in New York City, one he describes as such:

Fight week has seen him continue to jab at Nurmagomedov from all angles, but when it comes down to predictions, he keeps it simple.

“In there, I will be calm, I will be composed and I will be ruthless, the same way I am with anyone because that’s the way I have to be,” he continues. “It’s either me or him, and if that’s the case, then it’s always gonna be him.”