Between the grueling work in the gym and the hype for his Aug. 26 fight with Floyd Mayweather outside of it, Conor McGregor has found the time to hear the verbal shots being taken at him from the boxing purists who believe the UFC lightweight champion has no place being in a ring with a 49-0 future Hall of Famer.

And he’s using it as fuel.

“It’s certainly motivating, (hearing) the disrespect and disregard for my skill set,” McGregor said during a media teleconference on Wednesday. “I look at people and their mind is closed. They’ve got a closed mind to how things can be done. It’s a set way and there’s no other way. If that was the case we never would have reached across the waters in search of other land. We never would have went into space. You’ve got to have an open mind and you’ve got to realize that there are other ways. You’ve got to have respect for other disciplines and other styles.”

In 10 days, McGregor gets his shot to shock the world and prove that an elite mixed martial artist can make the move to the boxing ring and defeat an elite boxer. Whether talking to a boxing fan, an MMA fan or someone who doesn’t even follow combat sports, everyone has an opinion on the bout at T-Mobile Arena, and it’s shaping up to be a box office success the likes of which combat sports has never seen.

But booming business aside, can McGregor solve the puzzle no one has done in 49 fights over the last two decades? The Dubliner, never one to understate his case, was more low-key than usual on Wednesday, but that didn’t dull his confidence, which he attributes to the people closest to him.

“The team I have around me has instilled confidence in me,” he said. “We have a solid team, it’s been a growing team and an adjusting team throughout my career and I think we just want to find out how it’s done and how it’s done correctly. Training has been absolutely solid, everyone has a say and listens to each other. My word is not final, everyone’s input is there and then we come to the best solution. And it’s been an amazing camp.” 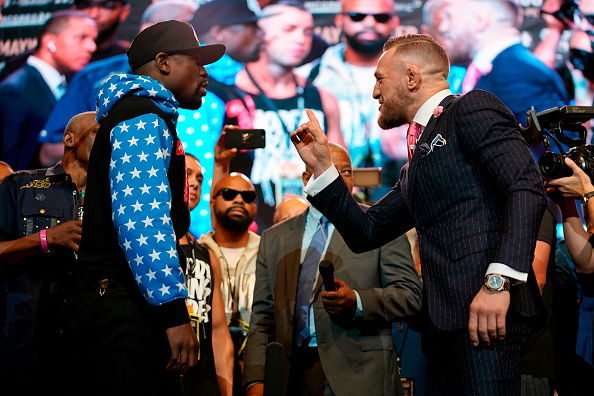 And while the Irishman has predicted a fourth-round finish of Mayweather that has been changed to two rounds after the Nevada State Athletic Commission ruled that the bout will now be contested with eight-ounce gloves, “The Notorious” one is touching all the bases during his Las Vegas camp.

“We are ready for absolutely every scenario,” he said. “I’m ready to go to war for the full 12 rounds and I’m ready to put him away in the first 10 seconds. That’s where my head’s at.”

If he does it, get ready for the world to stop for a moment. And while some in the same position might say, “I told you so,” McGregor is currently taking a different tact.

“I get it,” he said. “I’m coming in and I’m supposed to be from another sport. I understand where it’s at. But I’m just looking forward to August 26, going in and proving what I’m saying and educating the world on what martial arts is and giving the fans and everybody a good, solid fight and earning my respect in this game also.”