Conor McGregor is focused on Nate Diaz a week out from their epic rematch at UFC 202, but the Irish sensation — obsessed with records and making history — is eyeing not only a second world title, but three before it’s all said and done.

Speaking in front of a small collection of media at a private workout session at his self-made gym in Las Vegas, a relaxed McGregor spoke about the biggest question that always seems to follow him, even before his current matchup:

McGregor is holding his ground as the featherweight king, but he also wonders what would have been if Rafael Dos Anjos wasn’t forced to pull out of their scheduled lightweight title fight at UFC 196.

“If Dos Anjos hadn’t of p*ssied out of that last fight – the shots I hit Nate with in the first eight or nine minutes of that contest would have KO’d Dos Anjos,” McGregor said. "I’d be sitting here with a belt here and a belt there.”

But as fun as it is to talk about the future, McGregor has become fixated on getting the win back vs. Diaz, who submitted him in the second round in their UFC 196 welterweight fight in March.

McGregor sourced and built a gym in Las Vegas, secluding himself in the desert for an eight-week fight camp ahead of UFC 202. Stocked with heavy bags, an Octagon, weights, and a bevy of training partners, McGregor reveled in the structure he had created around him, surrounded by his team and buoyed by a strict camp schedule, and said he is feeling confident and healthy ahead of the biggest fight of his UFC career.

“I feel strong in mind; I always do. I don’t let defeat faze me,” he said. “The true champions can come back and rise again. I’m a true champion and I look forward to rising again on Aug. 20.”

The rematch is a whole new ballgame for both fighters. McGregor had a full camp before their first fight but he was preparing to face Dos Anjos. He didn’t spar one southpaw in the leadup to that matchup. 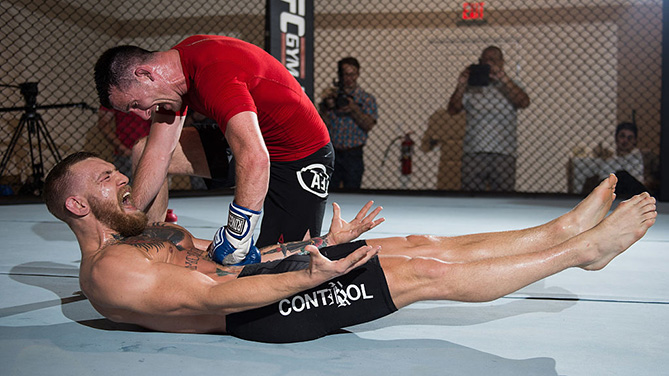 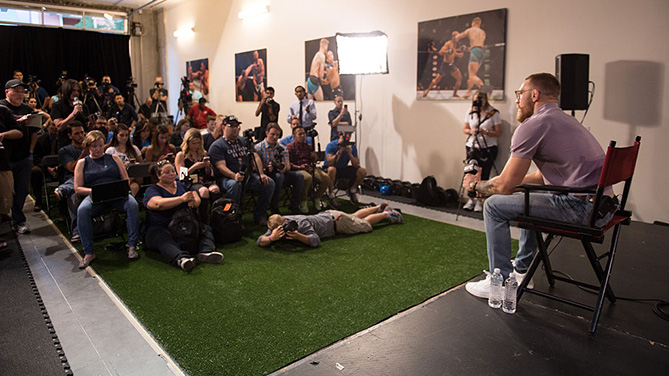 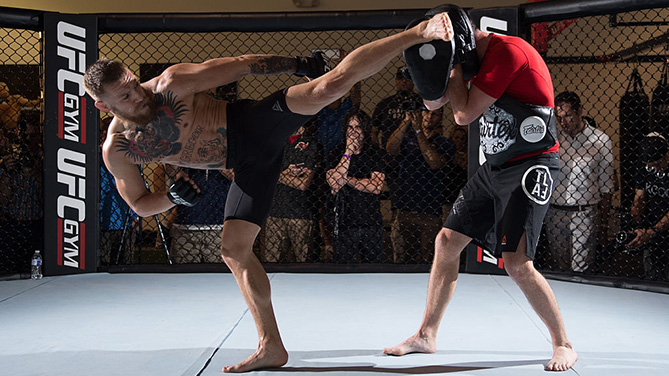 Diaz walked off a boat in Cabo San Lucas 10 days before the bout and to face McGregor on short notice.

McGregor has heard Diaz’s claims that he got knocked around in the first round because he came into the fight without preparing. He’s interested to see what adjustments Diaz makes in the sequel.

“I’m interested to see what the boy has done with a full camp,” McGregor said. “He was talking all this, ‘I didn’t have a full camp and that’s the reason I got my ass whooped for most of the fight until you couldn’t whoop my ass no more.’

“Let’s see what he has and let’s see what this full camp has done. I believe I’m the better fighter by a long stretch. I am more skilled, I am faster, I and smarter. He is tough, durable and big. That’s it. He spoke a big game and has had a long camp. Let’s see.”

Conor on what will be different in rematch. #UFC202 pic.twitter.com/Z2PuKJsUk9
— Matt Parrino (@MattParrinoUFC) August 13, 2016

Everyone will see at UFC 202, and after that McGregor has options. But make no mistake, he still is ready to defend his crown at 145 pounds. He wonders if the rest of the division is ready as well.

“They’re praying I don’t come back,” McGregor said. “I’ve beaten everybody in the division. If Frankie (Edgar)had of won that last fight after all the sh*t he was talking and his team was talking – it would have been set in stone.

"I’m going back to shut that man up, but he got slapped around in that fight. He couldn’t do nothing against (Jose Aldo) who I KO’d in one shot. Let’s see what happens after this fight, but I’m the featherweight world champion.”